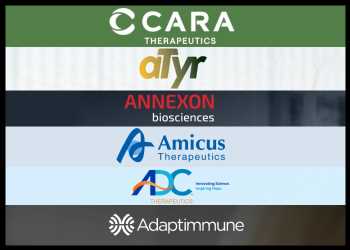 The following are some of the companies belonging to the healthcare sector that reported quarterly earnings and provided an update on their pipeline progress on Monday.

1. Adaptimmune Therapeutics plc (ADAP) is planning to seek FDA approval for its lead product candidate Afami-cel, being developed for the treatment of synovial sarcoma, in the fourth quarter.

Pooled data from Cohort 1 of the company’s SPEARHEAD-1 trial and the phase I trial of Afami-cel in patients with sarcoma are expected to be presented as a poster at ASCO.

SPEARHEAD-1 is a phase II trial of Afami-cel in patients with advanced synovial sarcoma or myxoid/round cell liposarcoma.

2. ADC Therapeutics SA (ADCT) has a clinical trial catalyst to watch in the coming months.

Topline results from a pivotal phase II trial of Camidanlumab Tesirine (Cami) in patients with relapsed or refractory Hodgkin lymphoma are expected to be reported in the first half of this year.

The company plans to have a pre-BLA meeting with the FDA, related to Cami, in the second half of 2022.

The first commercial product of ADC Therapeutics is ZYNLONTA, which received accelerated approval from the FDA for treatment of adult patients with relapsed or refractory large B-cell lymphoma last April. The drug generated net sales of $16.5 million in the first quarter of 2022, slightly down from $17.0 million reported in the fourth quarter of 2021.

3. Amicus Therapeutics (FOLD) has two regulatory catalysts to keep an eye on in the coming months.

The company continues to expect the FDA to approve the applications together by the July 29, 2022 action date.

4. Annexon Inc. (ANNX) has a couple of data readouts lined up for the coming months.

The lead drug candidate is ANX005, which is being explored across a number of indications.

— ANX007 is under a global phase II clinical trial in patients with geographic atrophy, dubbed ARCHER, with initial data anticipated in the first half of 2023.
— ANX009 is under a phase 1b trial in patients with lupus nephritis, with initial data anticipated in the second half of 2022.
— ANX105, being developed for treatment of chronic autoimmune and neurodegenerative diseases, is under a phase I trial, with data expected in 2023.
— ANX1502, being developed or the treatment of autoimmune diseases, is expected to advance into a first-in-human trial in the second half of 2022.

5. aTyr Pharma Inc. (LIFE) is on track to initiate a planned registrational study of Efzofitimod in pulmonary sarcoidosis in the third quarter of this year.

The company recently completed a phase 1b/2a study of Efzofitimod in patients with pulmonary sarcoidosis, which demonstrated safety, tolerability and consistent dose response for Efzofitimod on key efficacy endpoints and improvements compared to placebo.

A phase 1 study of the company’s second drug candidate ATYR2810 in cancer patients is expected to be initiated in the second half of 2022.

6. Cara Therapeutics Inc. (CARA) has a couple of catalysts to watch in the coming months.

— A phase II proof-of-concept trial of Oral KORSUVA in notalgia paresthetica is underway, with top-line data expected in the second quarter.
— A proof-of-concept phase II clinical trial of Oral KORSUVA for the treatment of pruritus in patients with hepatic impairment due to primary biliary cholangitis is ongoing, with data anticipated in the second half of 2022.

KORSUVA injection was approved by the FDA last August for the treatment of moderate-to-severe pruritus in hemodialysis patients. Its U.S. commercial launch began last month.

8. Castle Biosciences Inc. (CSTL) has increased its revenue outlook for 2022, based on the first-quarter results.

Total revenue for Q1 2022 jumped to $115.9 million from $41.2 million in the year-ago quarter, primarily reflecting strong product sales of Vasopressin and PEMFEXY.

10. Establishment Labs Holdings Inc. (ESTA), a global medical technology company, which has reported 26.8% revenue growth in Q1, 2022, continues to expect full-year revenue to grow in the range of 22% to 30%.