Celsius depositors should be on the lookout for phishing scams after the company revealed some of its customer data has been leaked in a third-party data breach.

On July 26, Celsius sent an email to its customers informing them that a list of their emails had been leaked by an employee of one of its business data management and messaging vendors.

According to Celsius, the breach came from an engineer at the Customer.io messaging platform who leaked the data to a third-party bad actor.

“We were recently informed by our vendor Customer.io that one of their employees accessed a list of Celsius client email addresses,” said Celsius in its email to customers. The data breach is part of the same incursion that leaked OpenSea customer email addresses in June.

Celsius has however played down the incident stating that it did not “present any high risks to our clients,” adding that they just wanted users to “be aware.”

On July 7, Customer.io wrote in a blog post that “We know this was a result of the deliberate actions of a senior engineer who had an appropriate level of access to perform their duties and provided these email addresses to the bad actor.” The employee has since been terminated.

The number of emails leaked was not disclosed, nor was the platform to which they were leaked.

However, the crypto community has started to warn Celsius users of phishing attacks which usually follow an email data breach.

Phishing is a form of social engineering in which targeted emails are sent to lure victims into revealing more personal data or clicking links to malicious websites that installs malware to steal or mine crypto.

A similar data breach in April 2021, saw Celsius customers reportedly targeted by a fraudulent website claiming to be the official Celsius platform. Some received SMS and emails prompting them to reveal personal information and seed phrases.

At the time, the company reported that hackers had gained access to a third-party email distribution system it uses.

Perhaps the most famous crypto data breach was from hardware wallet provider Ledger, which had its servers hacked in 2020. The spewing of thousands of customers’ personal details on the internet resulted in untold losses and even physical threats for many victims, yet the company has refused to compensate them. 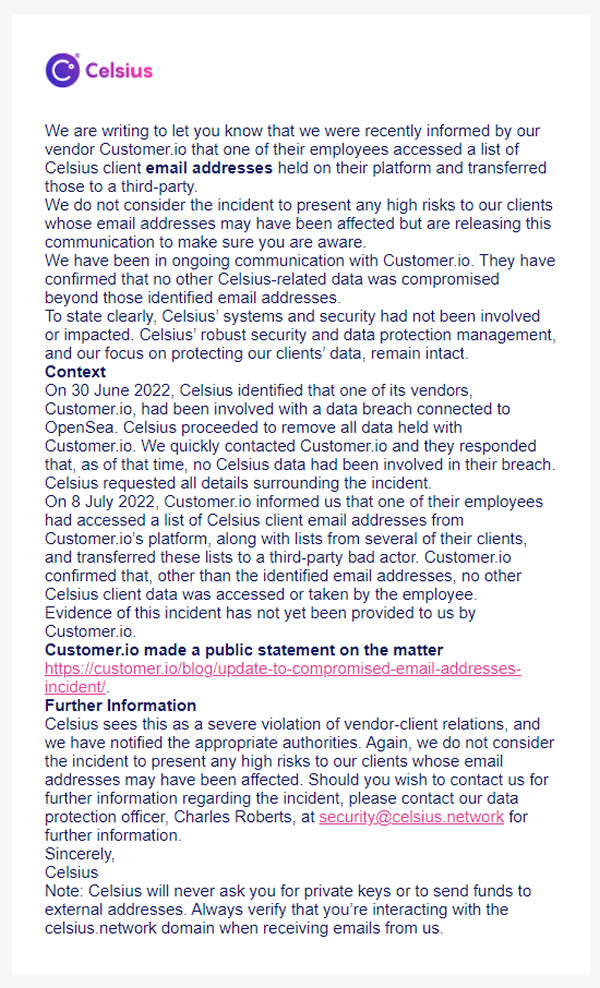