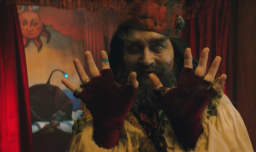 Before the prolonged agony of his multimillion dollar defamation trial with ex Amber Heard, Johnny Depp had some fun doing what he does best: creating a delightfully eccentric character.

The project was a trailer for a new massively multiplayer online role-playing game called Sea Of Dawn from Changyou, the Chinese company behind the hit free-to-play MMORPG Dragon Oath which, it says has registered 300 million users since it debuted in 2007.

Sea of Dawn is set during the post-medieval age of European exploration. Players can sail the high seas in warships or as pirates.

"I Know The Truth": Kate Moss Reveals Why She Chose To Speak In Johnny Depp-Amber Heard Defamation Case

Depp’s character is a fez-wearing former adventurer with an Irish accent named Phillip who is now blind and mostly confined to his home, which is littered with trinkets from his travels.

The conceit of the clip is that a bill collector (played by Francisco Rodriguez) has come a-calling and, instead of barring the door, Phillip invites him in and employs a bit of shock and awe. He overwhelms and misdirects the visitor by feeling his face, giving him a tour of the relics strewn about the chamber, asking him suddenly, “Do you happen to play the flute, boy?” and then accidentally lighting his own beard on fire. It’s a classic Depp caricature.

“If there’s an opportunity for humor, I’m going to grab it,” the actor explains of the face-feeling in a making-of featurette. “I want to watch a character who has the proper chutzpah to do things I would never do.”

By the end, Depp’s Phillip has entranced his visitor and brought forth in him a thirst for his own seafaring adventures which, of course, is what Sea Of Dawn is all about.

Pushing the tax collector out the door, Depp’s former swashbuckler says, “Your journey awaits you out there, on the tides.”

‘DC League Of Super-Pets’ Lays Its Paws On $2.2M In Thursday Previews