Jennifer Lopez’s ex-husband Marc Anthony was pictured looking disheveled during a boating trip with David and Romeo Beckham in Miami on Thursday.

Anthony, 53, a long time resident of South Florida, has a longstanding bromance with Inter Miami owner David Beckham. The soccer superstar’s son Romeo is currently in the franchise’s youth team.

Anthony looked slim and wide-eyed with unkempt hair, while an aluminum bottle of Bud Light rested at his feet.

The pictures come while Lopez continues to live her best life touring around Europe on her honeymoon following her wedding to Ben Affleck, who is her fourth husband.

Anthony and Lopez were married between 2004 and 2014. The couple have two children together, twins Emme and Max.

The children have been pictured alongside her mother during their whirlwind vacation across France and Italy.

They became an item shortly after her original relationship with Affleck ended in 2003 when he jilted her shortly before their planned wedding. 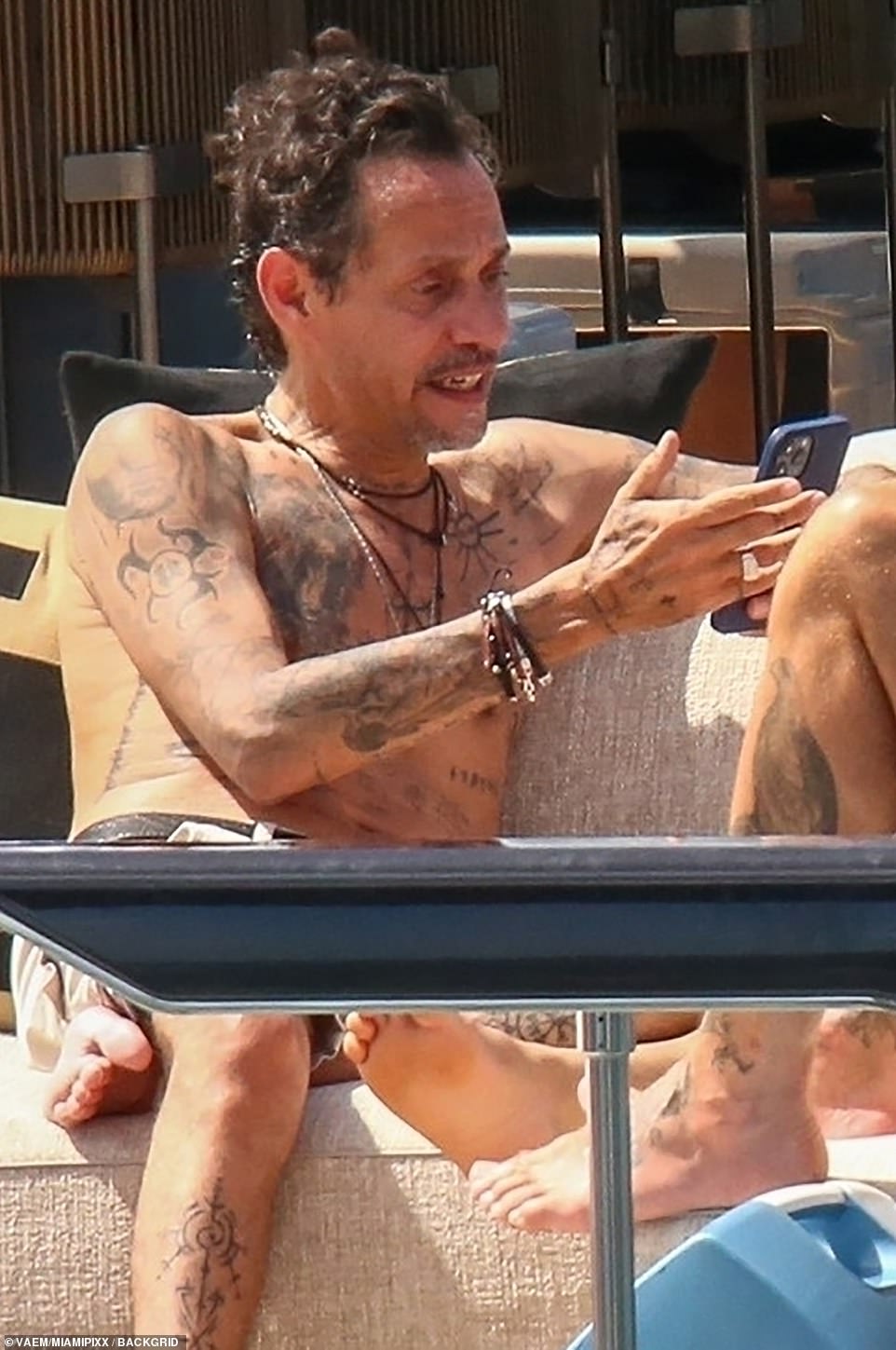 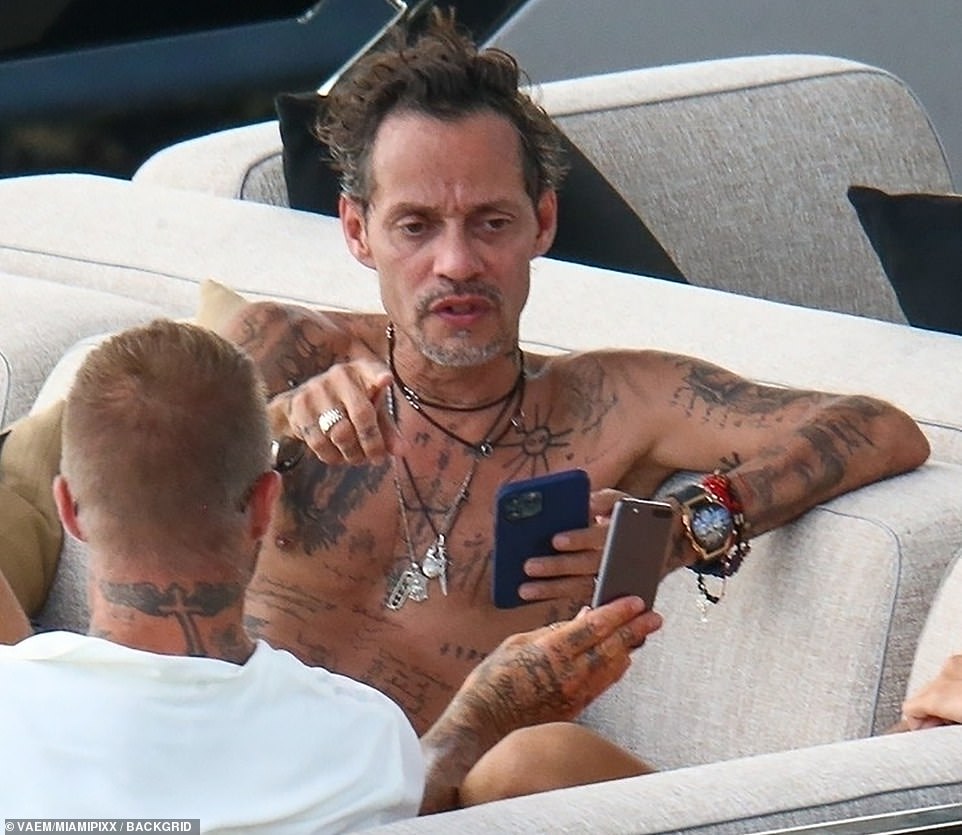 During one exchange, Beckham and Anthony appeared to share some information on their phones 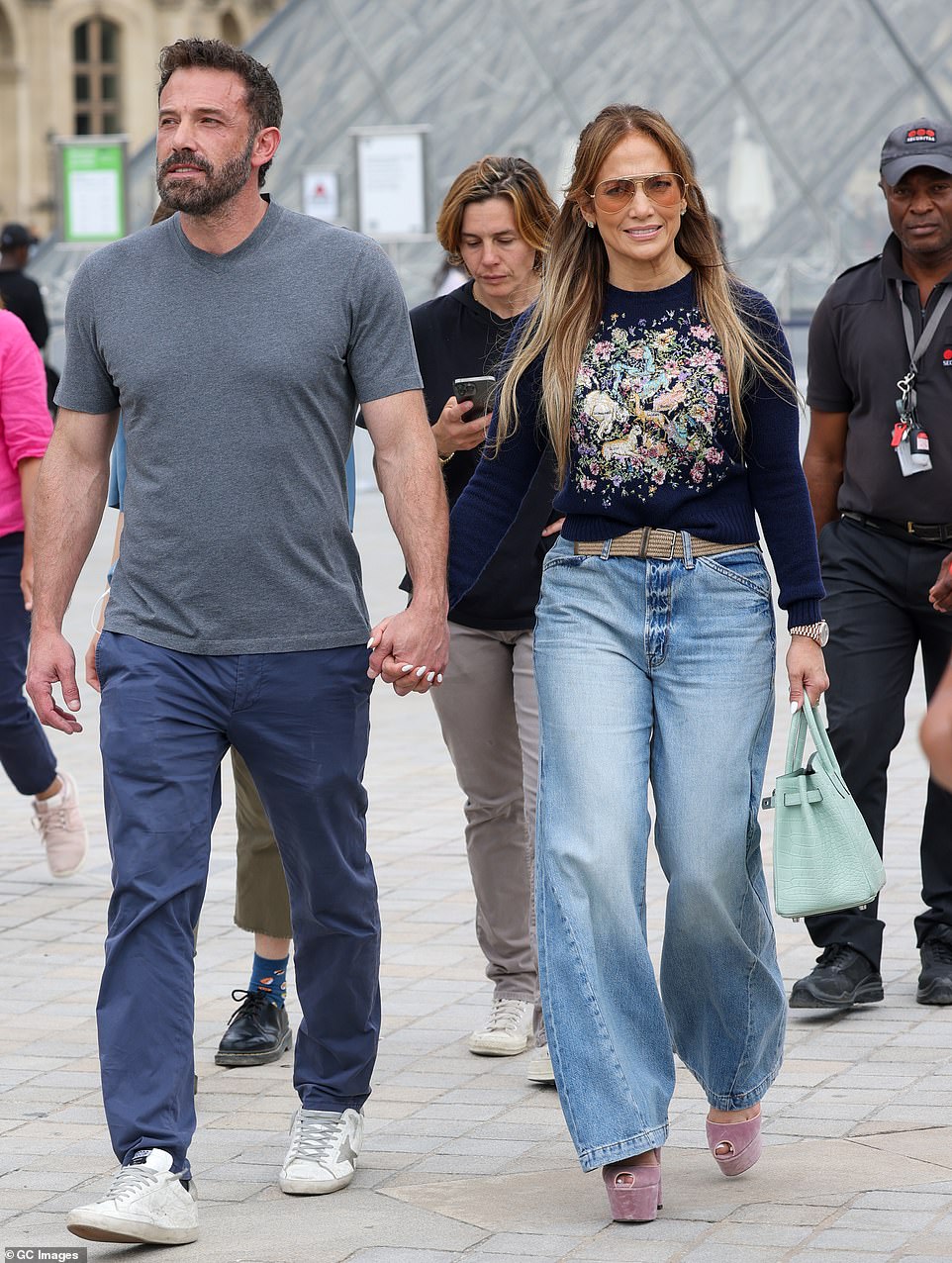 Anthony has not made any public statements on J-Lo’s rekindled romance with Ben Affleck. The couple are pictured here on July 26 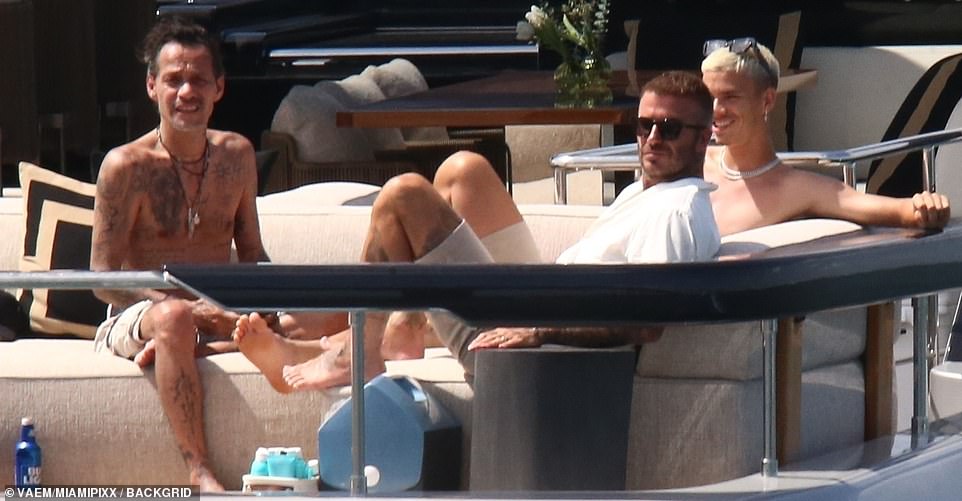 Anthony and Lopez were married between 2004 and 2014. The couple has two children together, twins Emme and Max 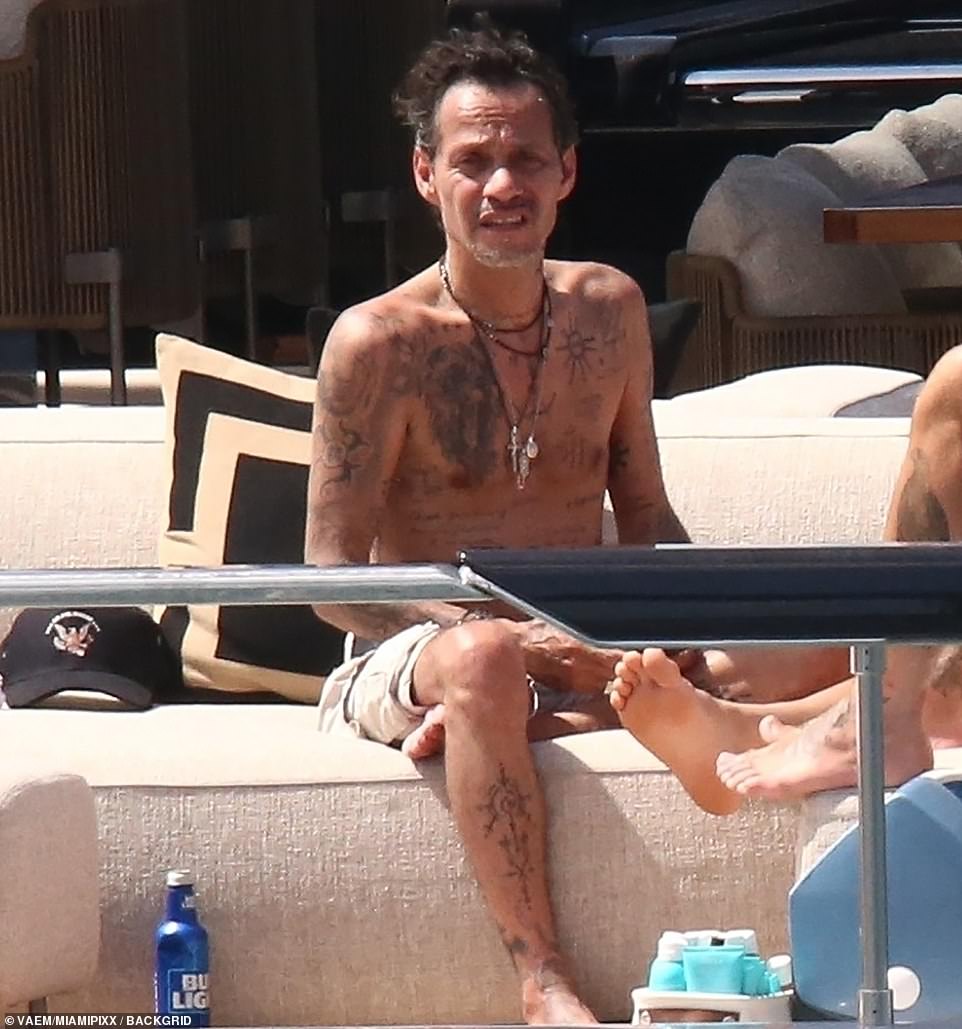 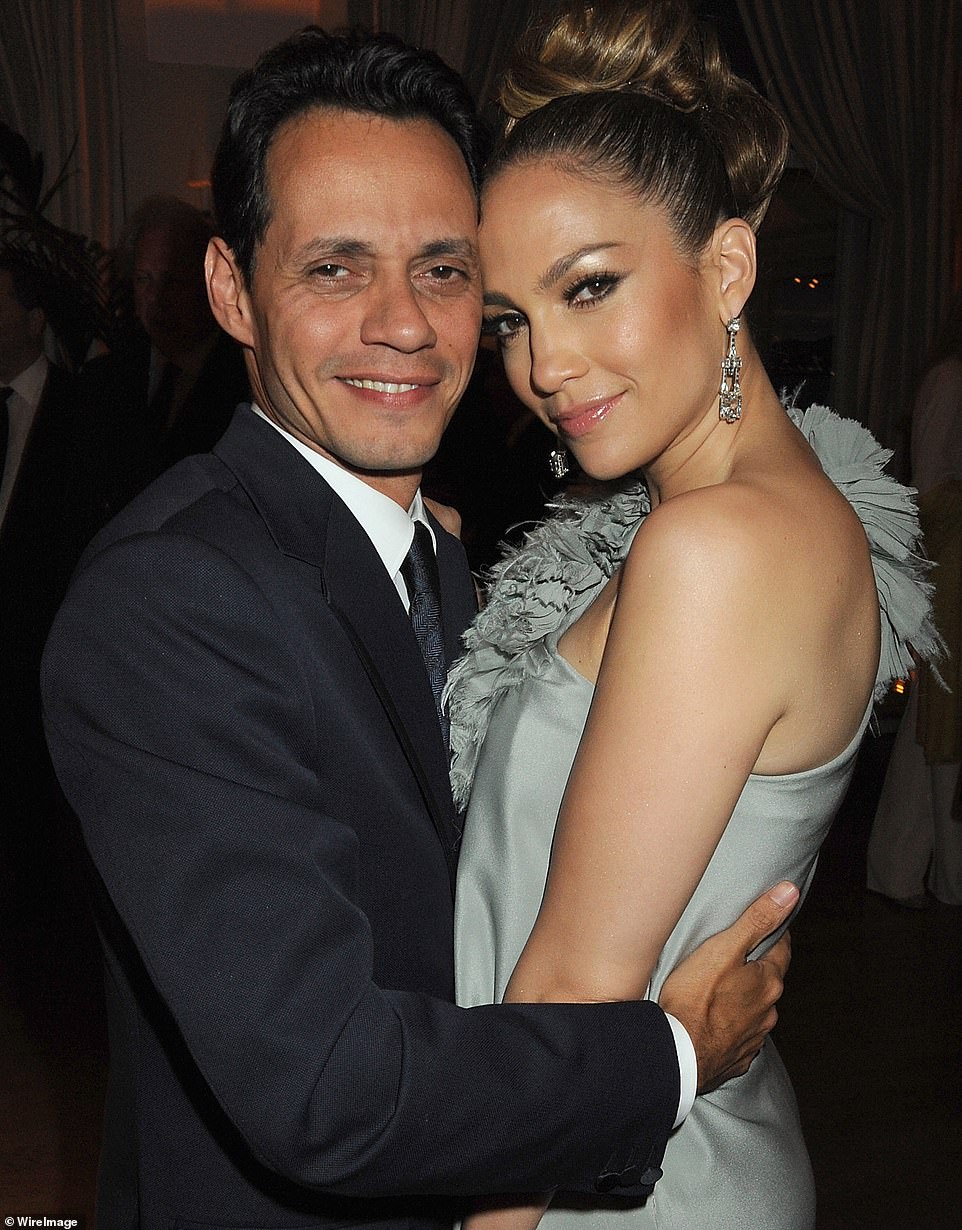 Anthony and J-Lo pictured together at the Vanity Fair post-Oscars party in 2010. The couple split a year later before finally divorcing in 2014

According to Hola, Anthony and Beckham have been pals since 2011 after the former Manchester United star and Victoria attended one of his concerts.

When Anthony celebrated 30 years in the music business in 2021, Beckham wrote a tribute on Instagram saying: ‘My friend, my brother… Today we celebrate 30 years of brilliance, passion, dedication and pure generosity. Happy 30th anniversary my brother. I love you… To life.’

Nothing solidified their friendship more than when Cruz Beckham was baptized in December 2019 at age 14 and Anthony was named as his godfather. Actress Eva Longoria is his godmother.

Cruz Beckham recently shared a sweet family snap on Wednesday as he and his loved ones continued to soak up the sun on their yacht holiday in St Tropez.

He captioned the snap ‘fam’ as David responded: ‘Family is everything.’ 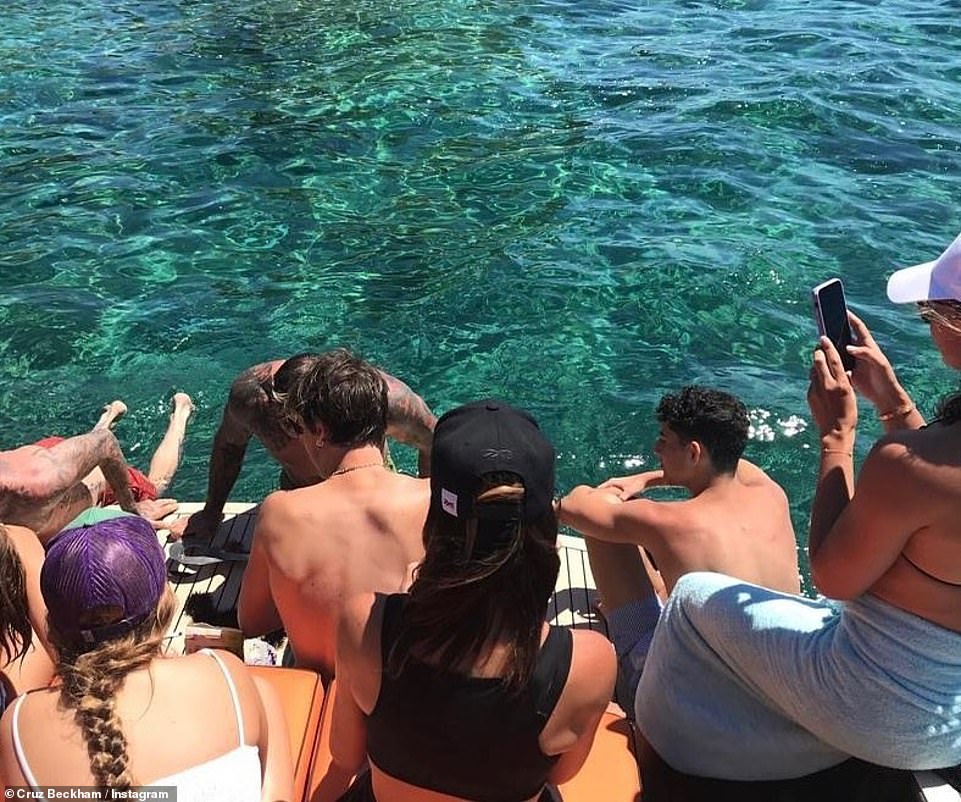 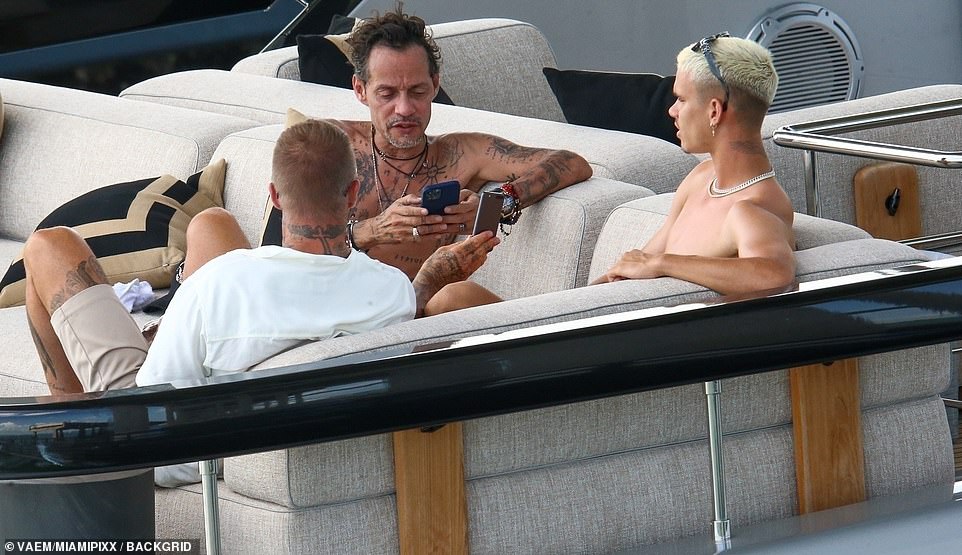 Anthony shown here with Romeo Beckham and his father. Romeo recently made his first appearance for Inter Miami in a friendly with Barcelona 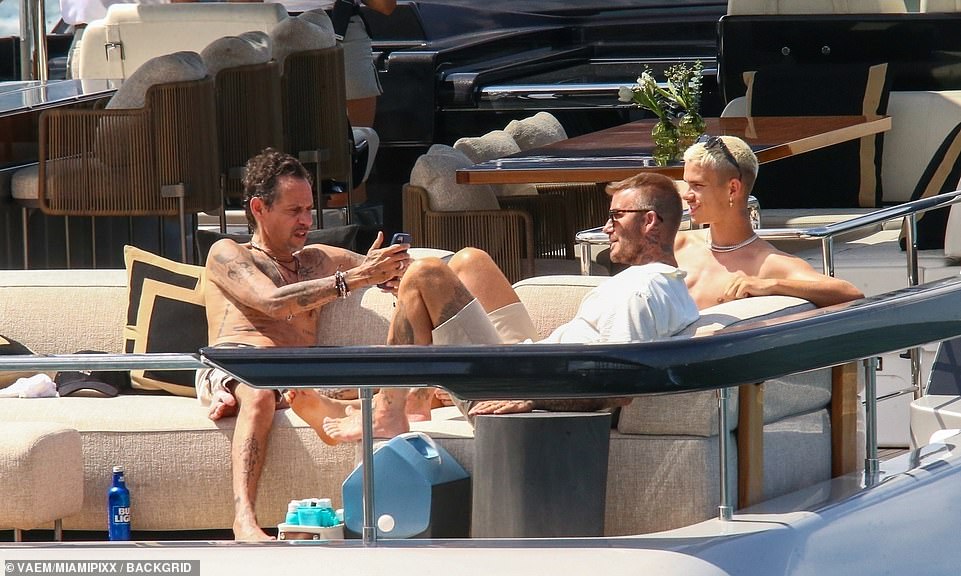 Anthony last made headlines in May when he was injured after falling down some stairs in Panama, canceling concerts as a result

Anthony last made headlines in May when he was injured after falling down some stairs in Panama, canceling concerts as a result.

The ‘Vivir Mi Vida’ singer told fans in an Instagram post after the accident: ‘What’s up this is Marc Anthony. I’m back in Miami and I’m currently seeking medical attention for my back. It’s that simple, I’m human, it hurts. I went to the concert, why would I fly into a country and not want to do the concert? I was really excited about it.’

He went on: ‘This is is more for people who are concerned. I’m going to be okay, it’s just painful. I want to pray for anybody who has felt this pain.’

‘I’m going to be back soon, better than ever, but I just had to address this. Thank you for your well wishes, stay safe.’

Anthony was transported from Panama back to Miami in order to be treated by a specialist.

Oddly, Anthony has a bad history with show dates in Panama. In February 2021, he canceled a show in the country due to Covid-19 and in 2015 he had to call off a performance because he was dehydrated.

Staying with the Panama theme, Anthony posted a photo in December 2019 showing Beckham attending one of his concerts in the central American country. 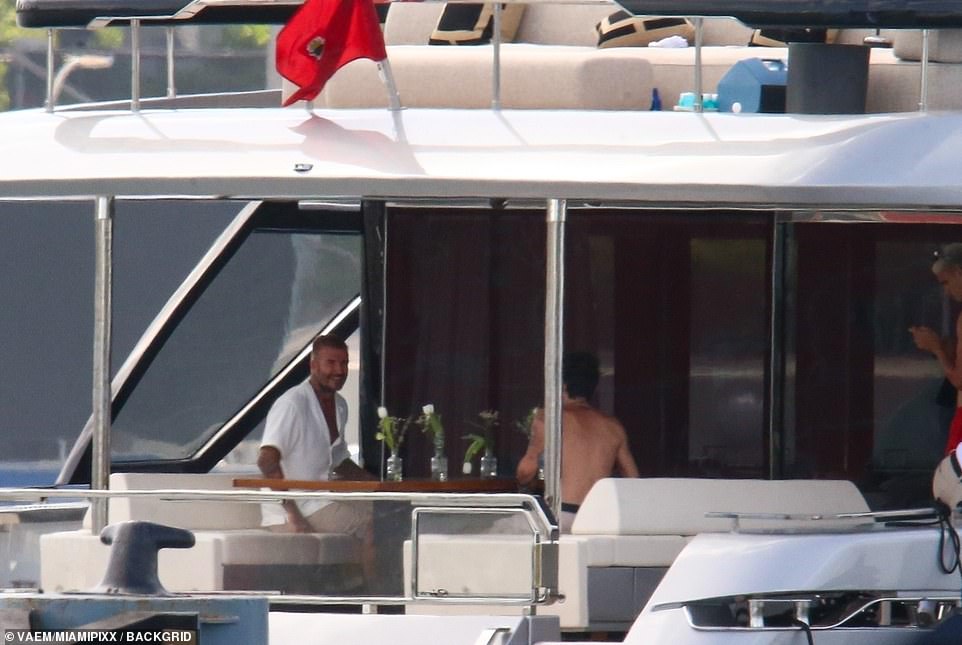 Anthony told his fans on Instagram after his accident: ‘I’m going to be okay, it’s just painful. I want to pray for anybody who has felt this pain’ 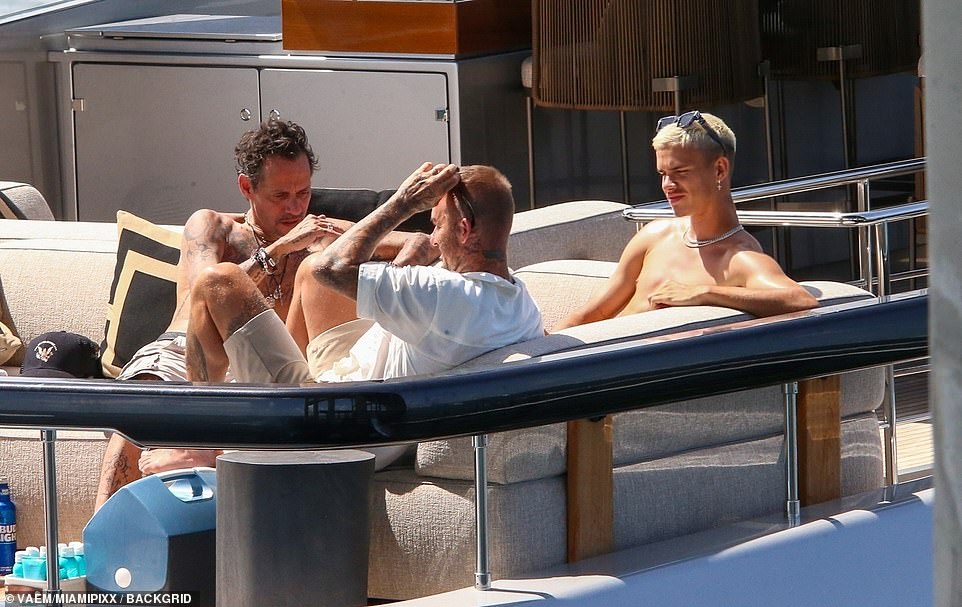 Following his accident, Anthony was rushed back to Miami from Panama to be treated by a specialist 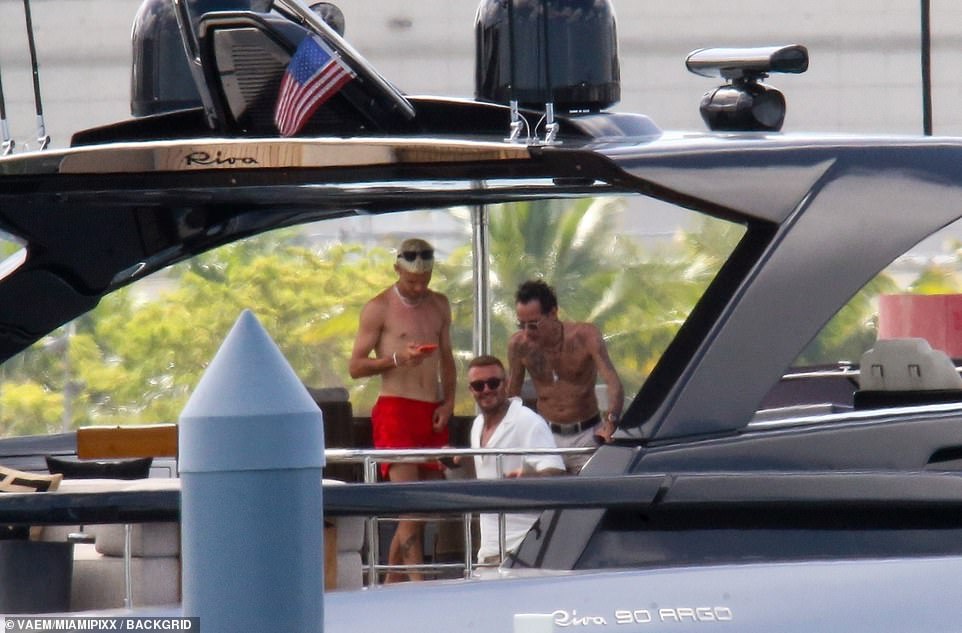 According to an Instagram post from Victoria Beckham, the shorts Romeo is wearing in this photo belong to his father

J-Lo’s ex meanwhile has his own fiancée. The singer proposed to 23-year-old Miss Paraguay Nadia Ferreira this past March. It’s not clear if the couple have set a date.

The couple were first pictured together in early 2022. Ferreira was not pictured on Anthony’s recent boating day out. Although photos from her Instagram page show her in Miami.

As recently as December 2021, Anthony was pictured out on the town in Manhattan with 22-year-old girlfriend Madu Nicola.

Anthony, a native of New York City, has long-standing ties to Miami. In 2021, he finally sold his waterfront estate in the area for $22 million, having slashed the price down from $27 million.

That wasn’t the first time he took a hit on Miami real estate. In 2015, he bought another home in the Pinecrest suburb of the city for $5 million. He sold that house two years later for $5.1 million.

The house went on the market in May of this year for the price of $12 million, according to the Wall Street Journal. 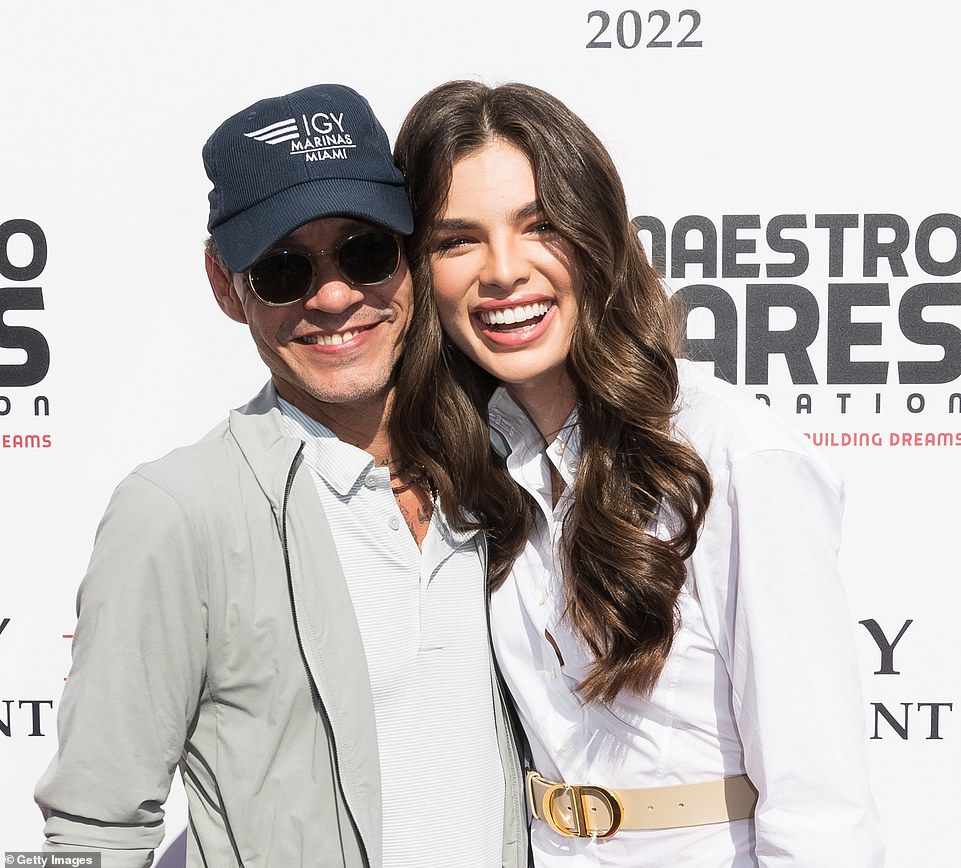 Anthony proposed to 23-year-old Miss Paraguay Nadia Ferreira this past March. It’s not clear if the couple have set a date 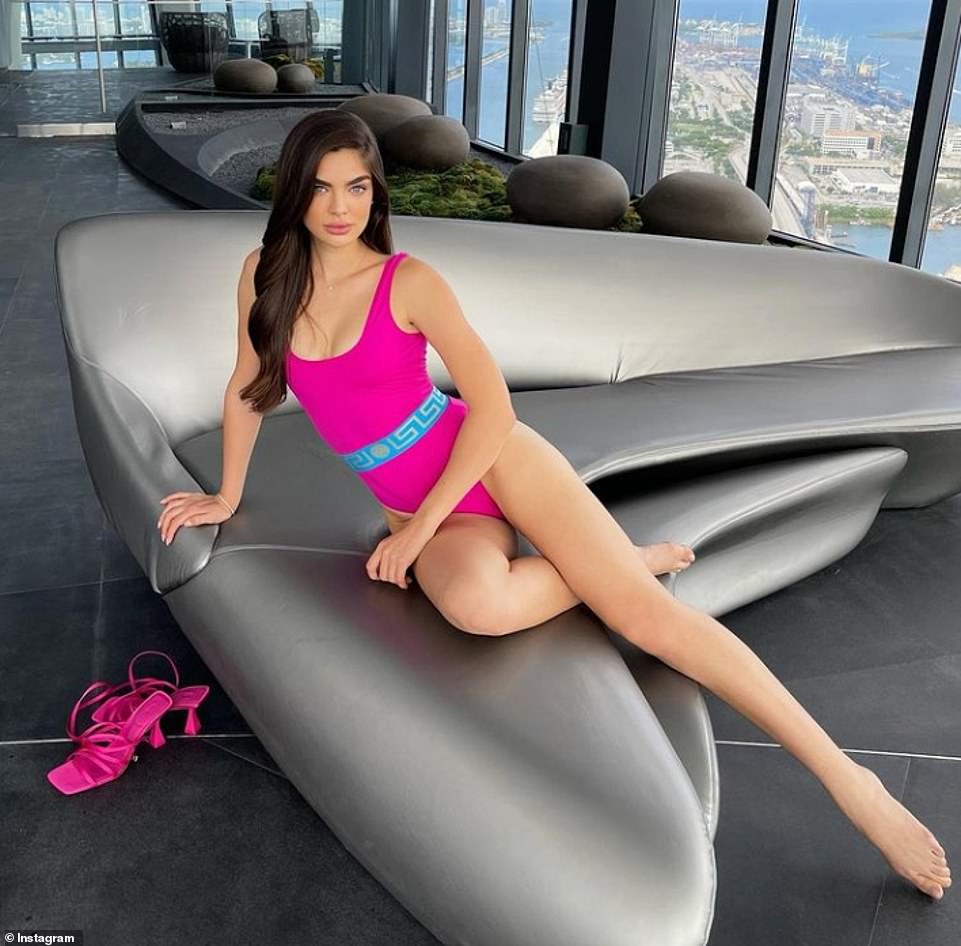 The couple were first pictured together in early 2022. Ferreira was not pictured on Anthony’s recent boating day out 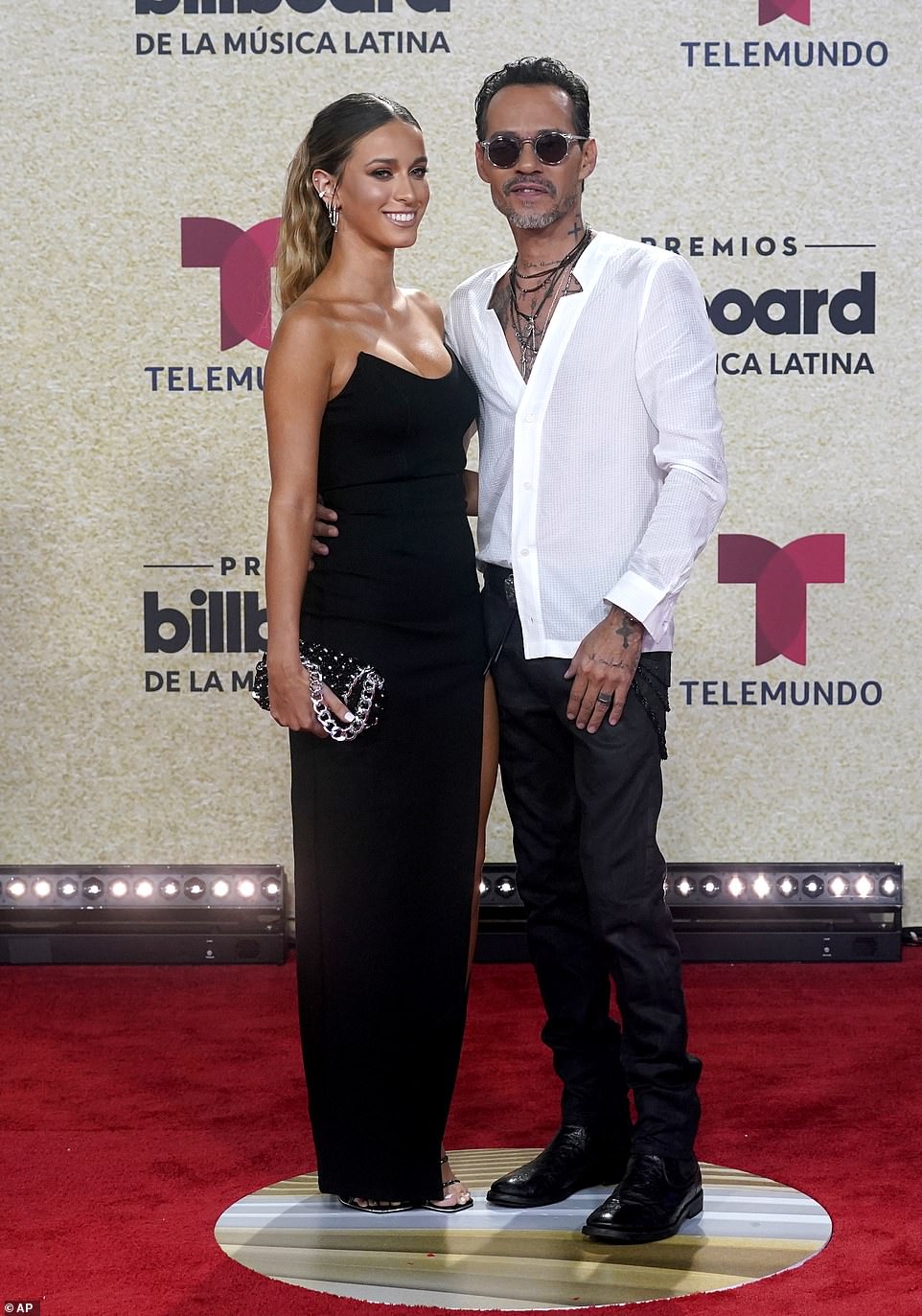 As recently as December 2021, Anthony was pictured out on the town in Manhattan with this woman, 22-year-old Madu Nicola

Beckham’s ties to South Florida are more recent. In 2018, he became the owner of Major League Soccer franchise Inter Miami.

He later installed friend and former teammate Phil Neville as head coach. Recently, Romeo Cruz made his debut for the team in a friendly defeat against Barcelona.

In May 2021, J-Lo was spotted with Anthony having coffee at the W Hotel in New York City, shortly after her break-up from former Yankees star Alex Rodriguez.

At the time, a source told People Magazine: ‘Jennifer and Marc Anthony have a great relationship. Having Marc around while she has had to work abroad has been very comforting for Jennifer.’

Anthony has made any public statements regarding Lopez’s rekindled relationship with Affleck.