DOZENS of people have died and about 90 are missing after a brutal police crackdown on anti-government protests in Colombia.

The European Union has urged cops to stop being so heavy-handed, while human rights officials are "deeply alarmed" by reports of police shootings. 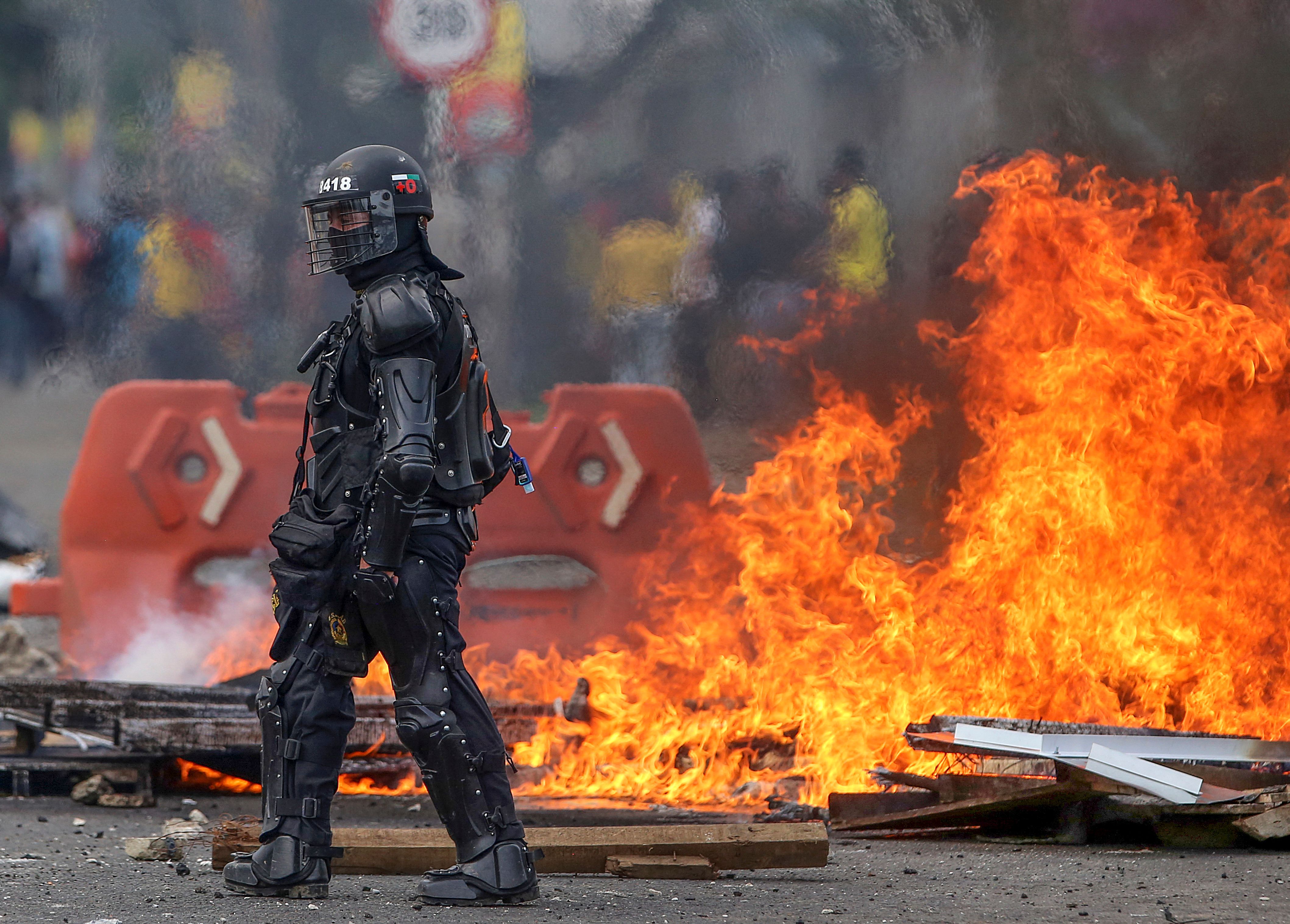 Cops have been "opening fire on demonstrators” in the Colombian city of Cali, killing and injuring scores of protesters.

The international community has slammed what the UN described as an "excessive use of force" by security officers after more than 20 people died and about 850 were injured during days of anti-government protests.

Tens of thousands of Colombians have taken to the streets in demonstrations that began last Wednesday, April 28.

They are showing their anger over a proposed tax reform, but their action has since morphed into broader protests against the government of President Ivan Duque. 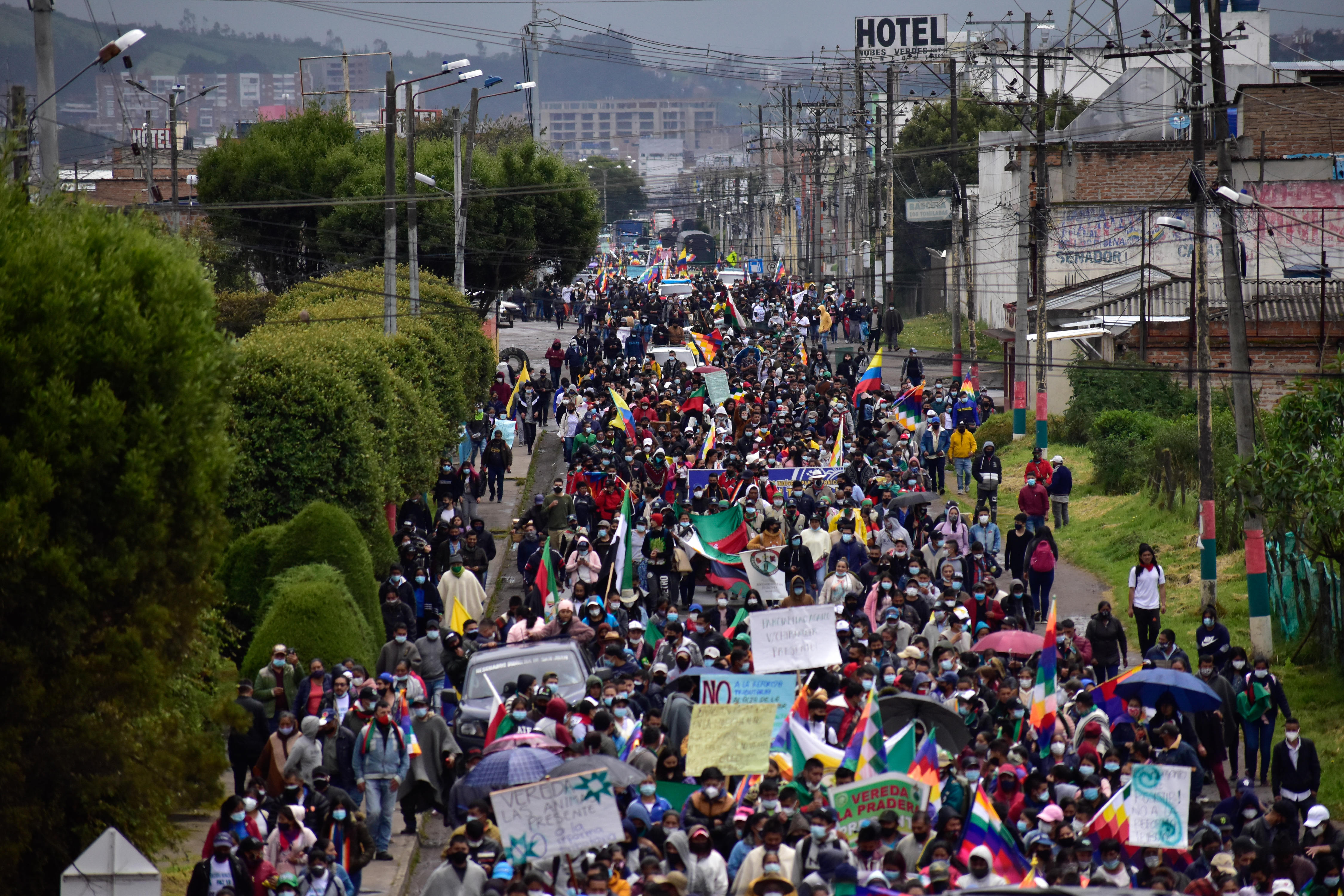 The Ministry of Defense has deployed 47,500 uniformed personnel countrywide.

Fears have been rising about a creeping militarization as police and soldiers have forcefully clamped down on recent protests.

The Office of the UN High Commissioner for Human Rights voiced "profound shock" about a shocking incident in Cali when cops "opened fire" to kill and injure more demonstrators.

"What we can say clearly is that we have received reports, and we have witnesses, (of) excessive use of force by security officers, shooting, live ammunition being used, beatings of demonstrators and as well detentions," spokeswoman Marta Hurtado told reporters in Geneva.

Ariel Avila, the deputy director of Colombia's Foundation for Peace and Reconciliation, said: "It is the strategy of old… a message to shut down the protests."

A local security official said five people died in Cali overnight on Tuesday May 4, and 33 people were injured. 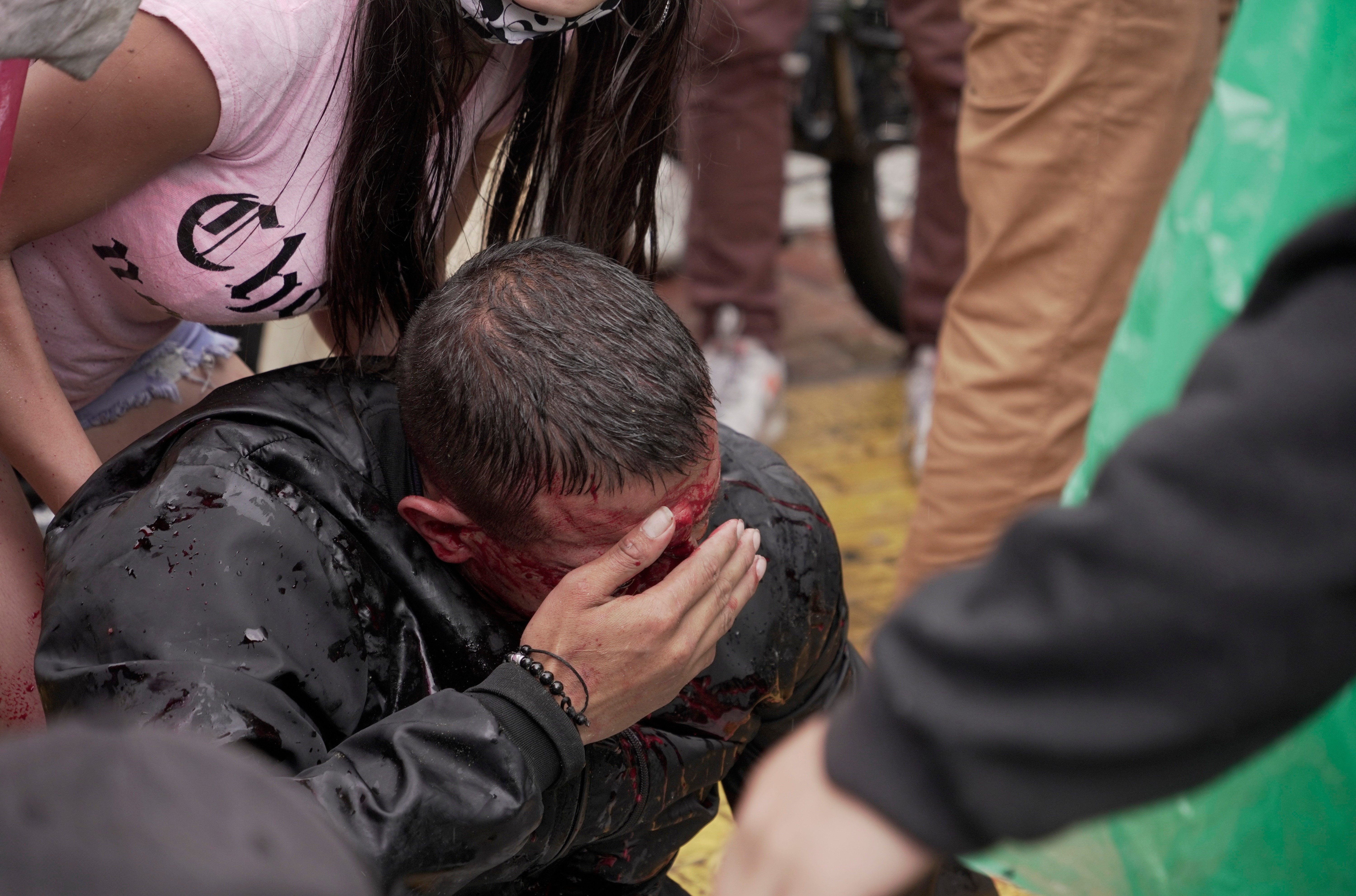 Wednesday, April 28: Tens of thousands of Colombians take to the streets in major cities to rail against a proposed tax reform

The protests begin after the government launches a tax plan aimed at raising $6.7billion to tackle the country's debts and maintaining a basic income scheme for three million low-income people that started during the Covid pandemic.

Colombians fiercely resist the plan as they believe it punishes the middle class, and is cruel to introduce in the midst of the pandemic. 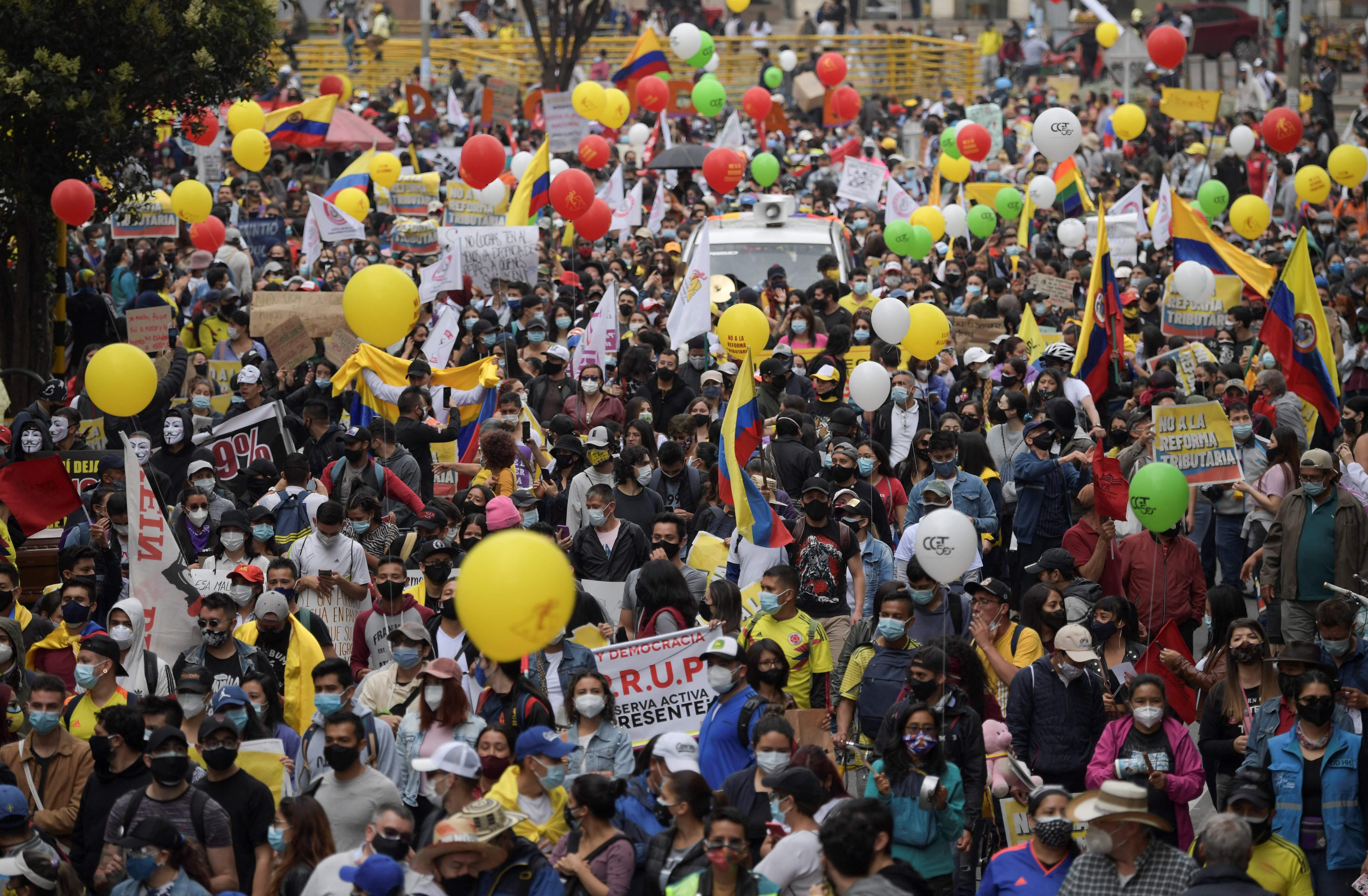 Thursday, April 29: Far fewer protesters are out on Thursday for a second day of demonstrations against the hated tax reform.

Military and police forces report blockades of roads near Bogota and in Valle del Cauca province, where protesters stop traffic to the city of Buenaventura, home to Colombia's main Pacific port. 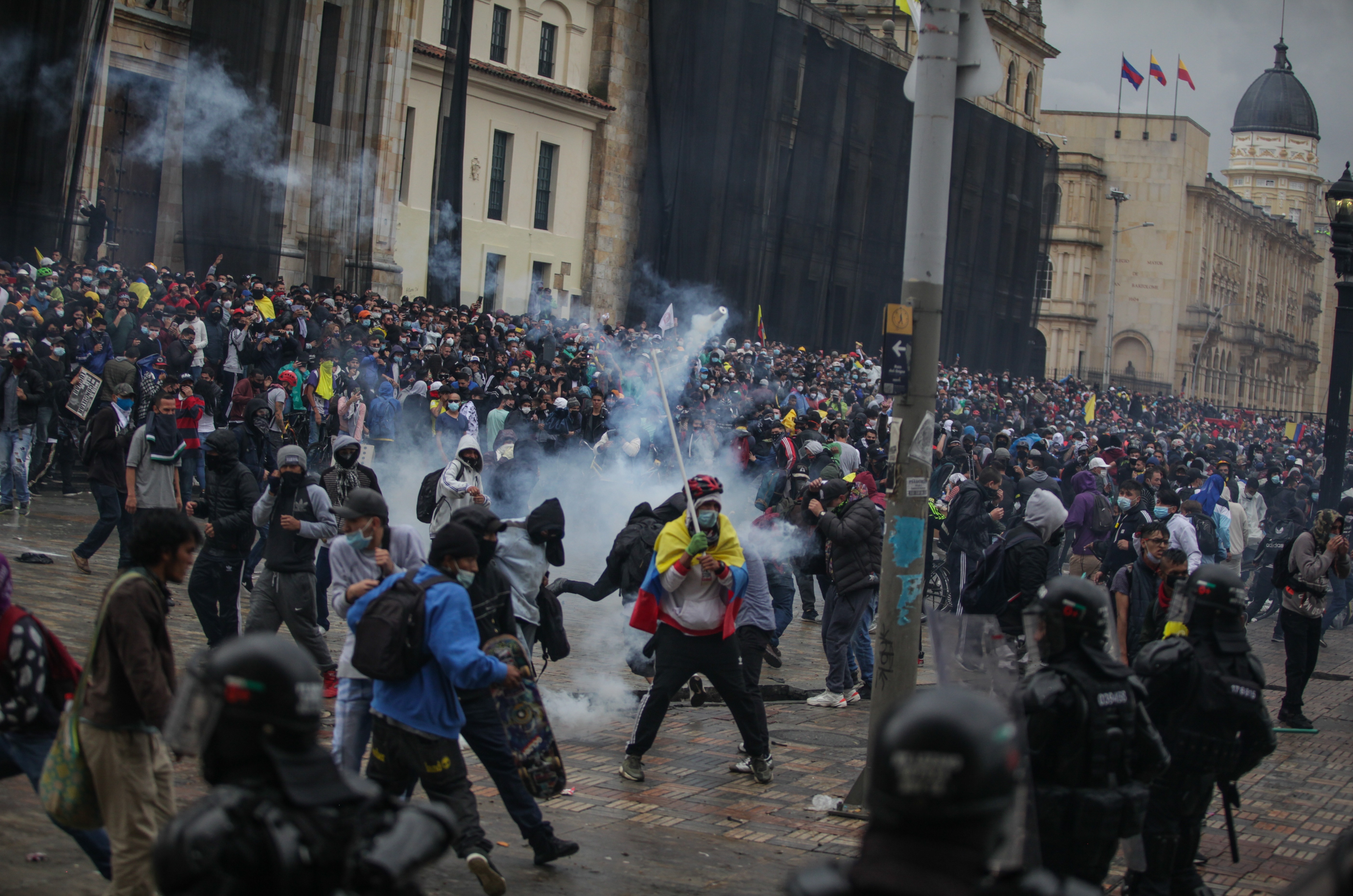 Friday, April 30: Colombia deploy 2,500 more police and army units to Cali, its third-biggest city, to crack down on protests and vandalism.

Tear gas and rubber bullets are fired in clashes with protesters, to disperse crowds. 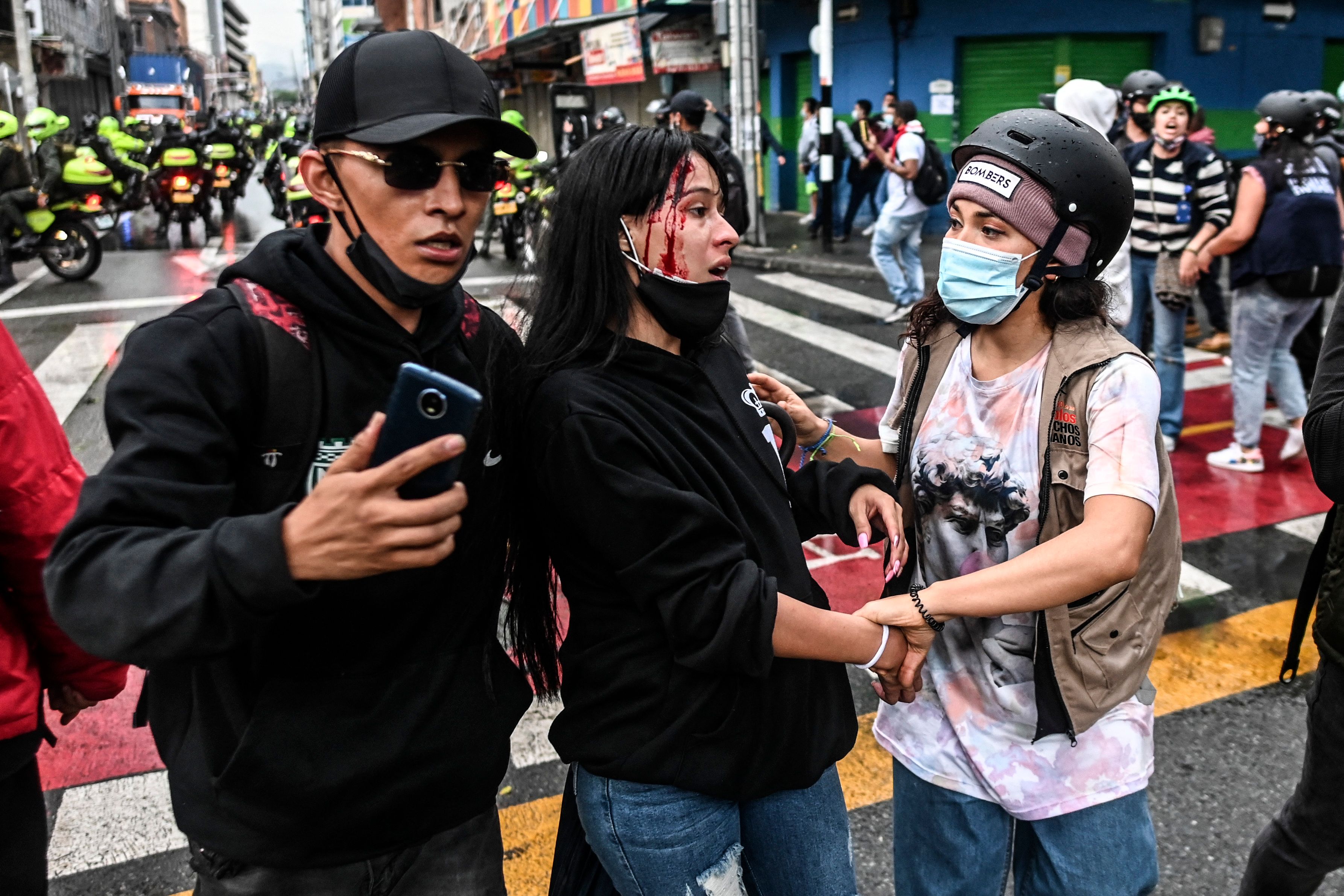 Saturday and Sunday, May 1-2: Thousands of Colombians pack streets on Saturday for International Workers' Day marches in the fourth day of demonstrations, which have so far resulted in at least four deaths.

A police officer stabbed earlier in the week amid looting in the city of Soacha, south of capital Bogota, has died of his injuries.

Isolated looting, vandalism and clashes between cops and protesters also takes place in Bogota, Medellin and other cities.

Demonstrations continue over the weekend despite an announcement by Duque late on Friday that his tax reform would be revised, and would now not include sales tax on food, utilities or gasoline or an expansion of income tax.

The Finance Minister Alberto Carrasquilla has now quit his role. 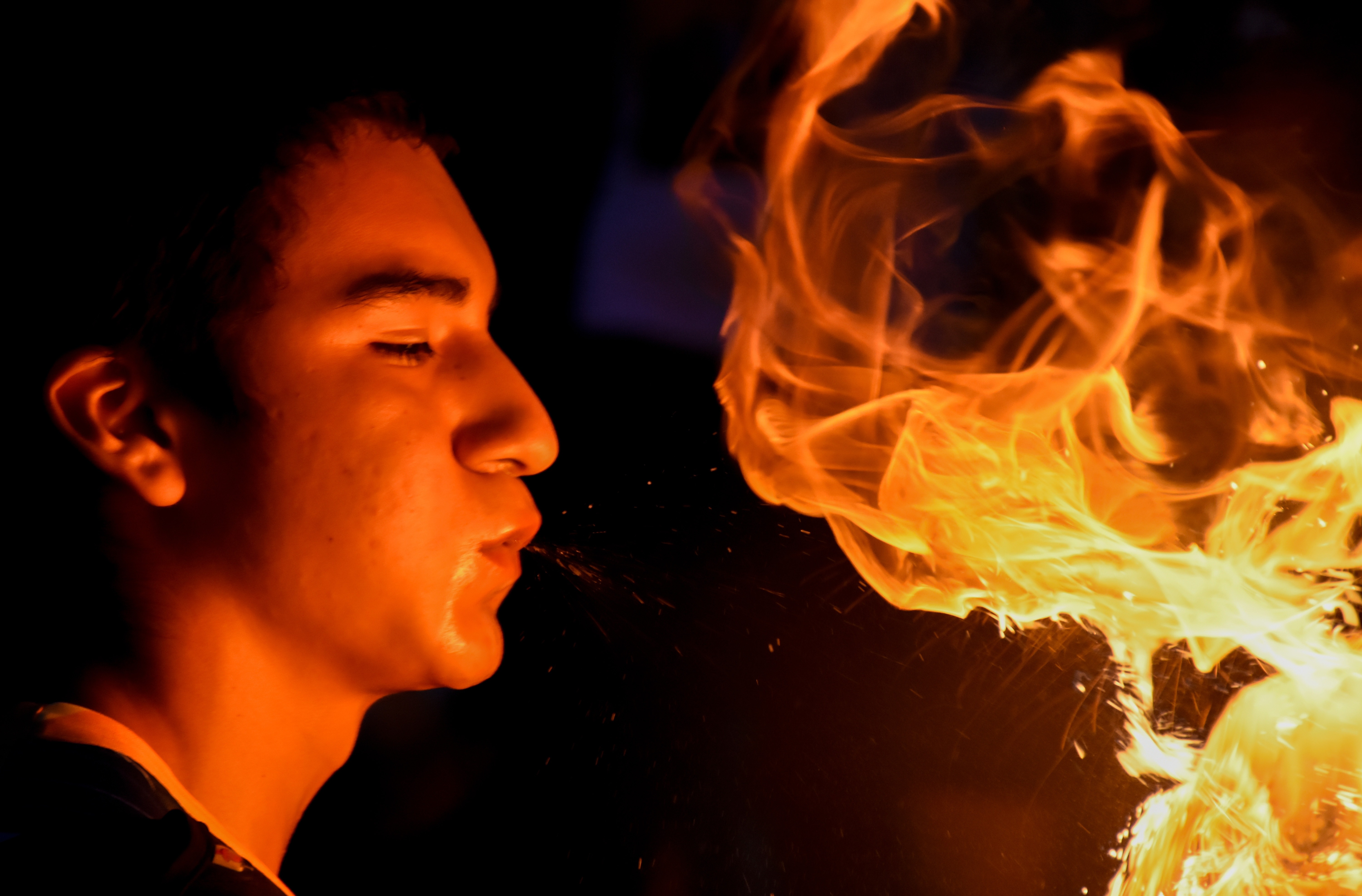 Monday, May 3: Protesters call for fresh mass rallies after more than 800 people were wounded in clashes during five days of demonstrations.

In the face of the unrest, the government of President Ivan Duque on Sunday had ordered the tax reform proposal be withdrawn from Congress, but this doesn't defuse the public anger.

In Cali – at the heart of fierce clashes with military and riot cops – 11 demonstrators have now died, says the Andean country's human rights ombudsman.

The national police has said it will investigate more than two dozen allegations of brutality, while the defense minister has alleged illegal armed groups are infiltrating the protests to stoke violence. 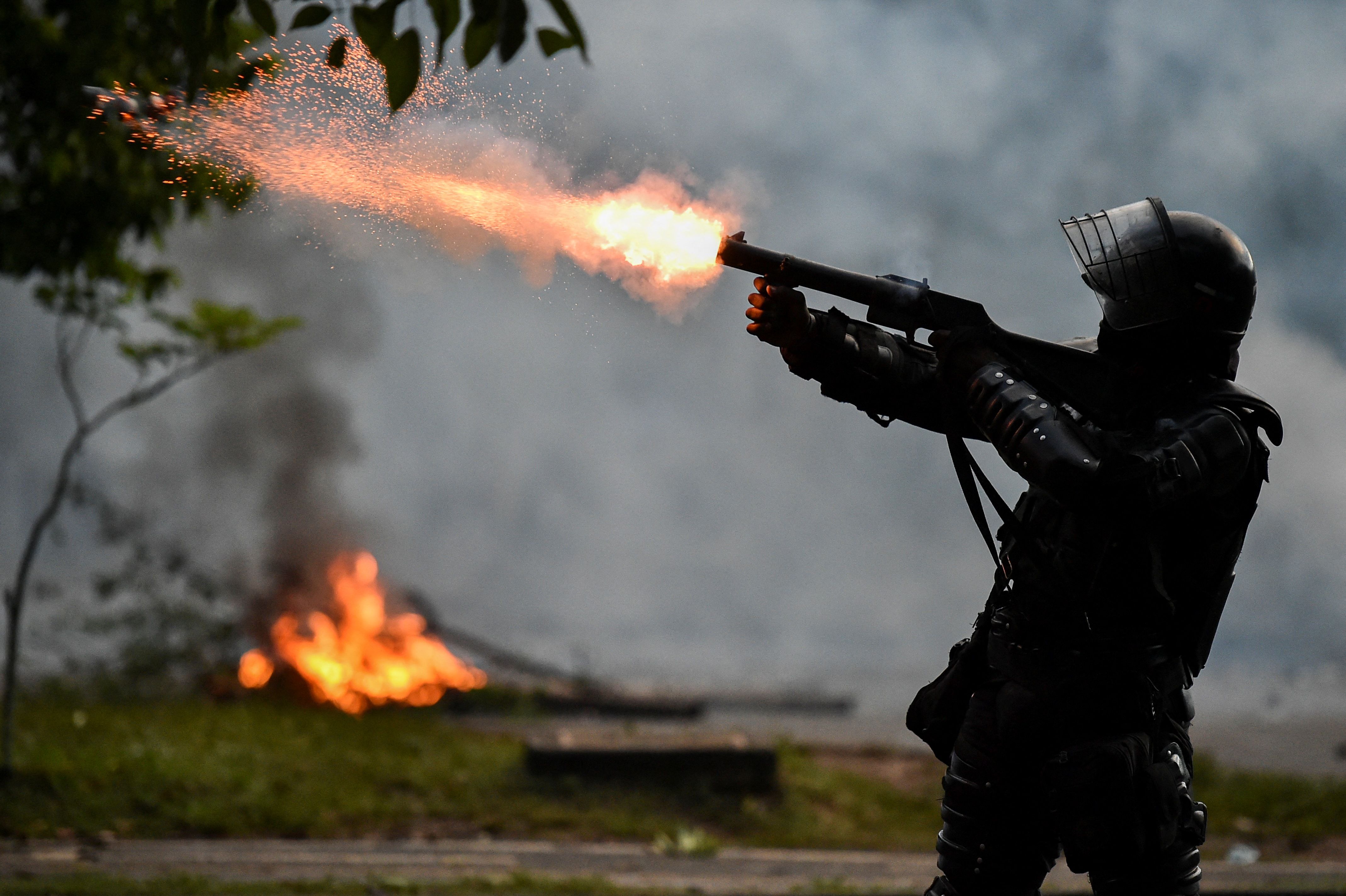 Tuesday, May 4: The UN human rights office on Tuesday condemns "excessive use of force" by security officers in Colombia during the protests.

The demonstrations – originally to oppose a now-canceled tax reform – have morphed into broader action against poverty and police violence.

The clashes force the South American Football Confederation (CONMEBOL) to move two of this week's Copa Libertadores games to Paraguay.

Colombian President Ivan Duque says the government is ready to hold a national dialogue after days of protests led to more than 20 deaths and international warnings about the use of excessive force by cops. 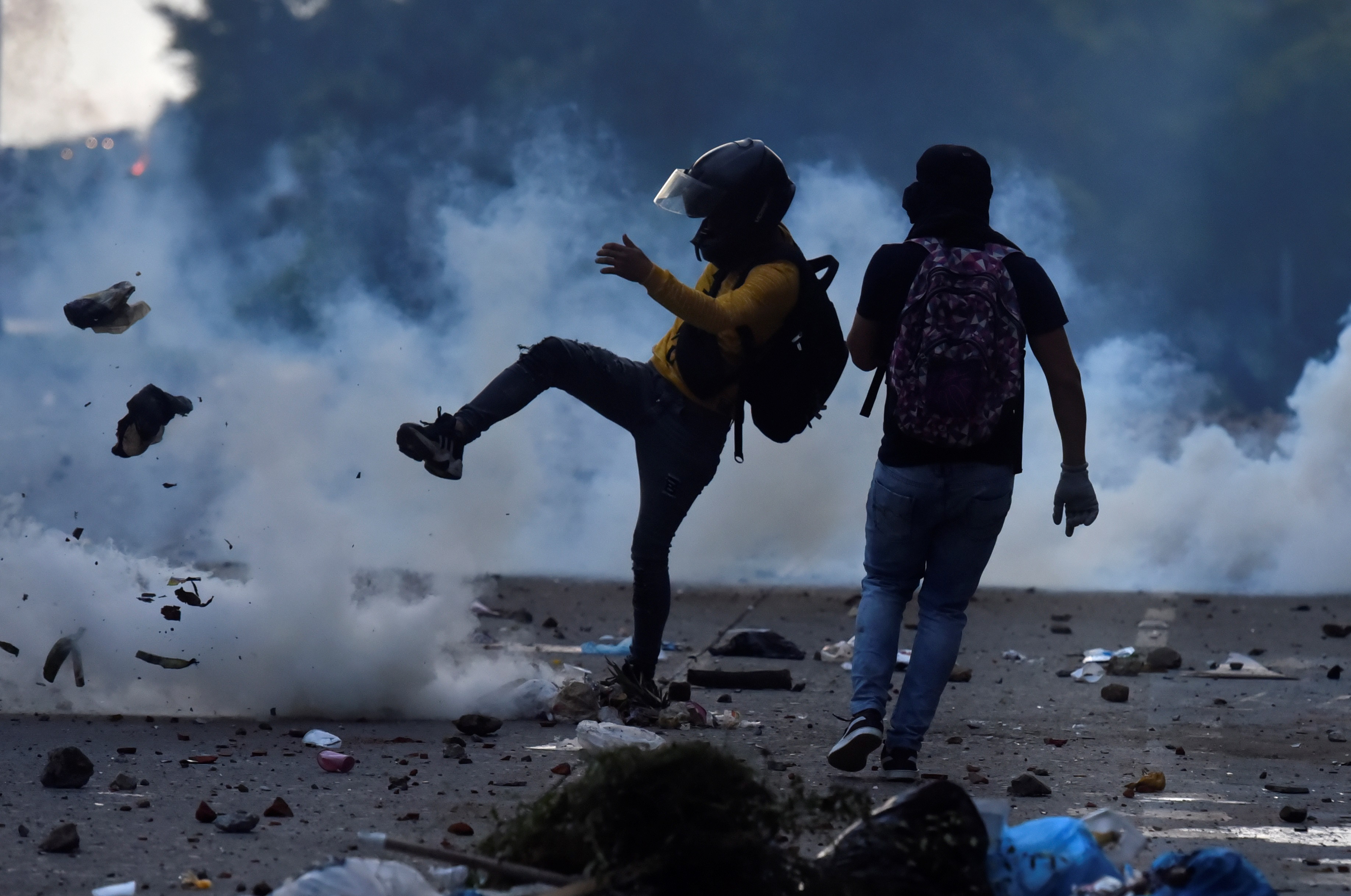 Wednesday, May 5: Mass marches and a national strike are planned, a week after protests started.

Angry demonstrators are calling for a basic income guarantee, the withdrawal of a government health reform proposal and the dissolution of the riot police.

Numerous videos have emerged on social media showing police using excessive force during the protests and even shooting at some demonstrators point blank.

Ariel Avila, the deputy director of Colombia's Foundation for Peace and Reconciliation, has hit out at the deployment of hundreds of soldiers. 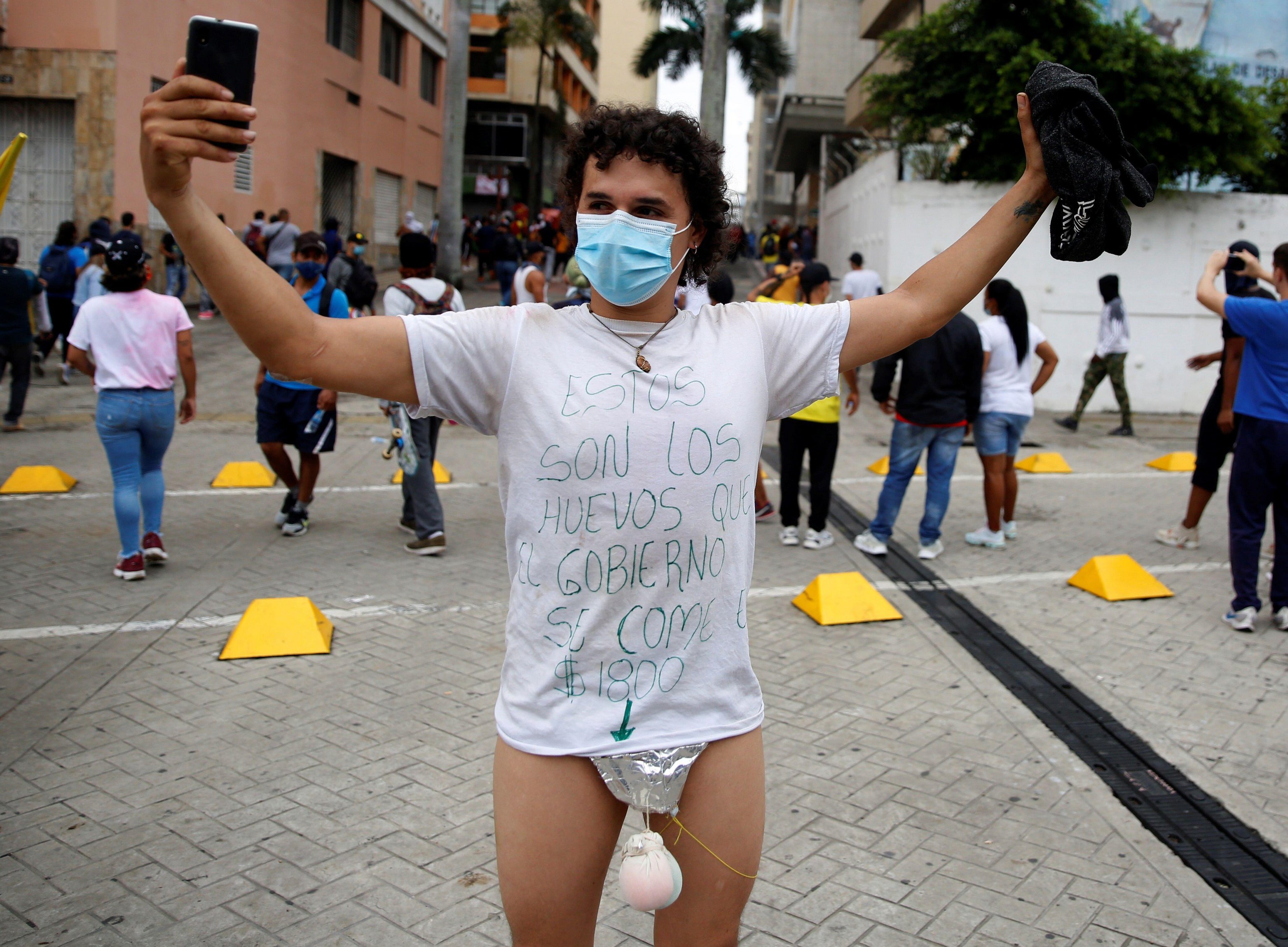 In such a volatile situation, adding soldiers to the mix is "a terrible risk," said Avila.

"It is an excessive response… which will increase the number of deaths," he tells news agency AFP.

Observer group Temblores says 940 cases of police abuse have been reported to it in the last few days of protests.

In Cali alone, 700 soldiers, 500 riot cops, 1,800 other police and two helicopters have been put into operation.