NSW’s top doctor has urged New Year’s revellers not to party if they have any symptoms after the state reported 21,151 new cases of COVID-19 on Friday, expressing hope for a “brighter” 2022.

Chief Health Officer Kerry Chant said it was likely the case numbers were well above the reported figure. More than 14 per cent of tests processed in the 24 hours to 8pm on Thursday were positive, indicating a significant rate of cases undetected in the community.

With people likely to come into contact with a COVID-positive person in public, Dr Chant said, “we all have a part to play to reduce the impact of those case numbers”, particularly at New Year’s gatherings.

“Even though it may be that one-off event where you’ve been looking forward to you seeing family and friends, if you have the most minimal of symptoms, I am asking you to stay home, isolate and get a test,” Dr Chant said.

She urged people to use rapid antigen tests before attending a large party or visiting vulnerable people, such as the elderly or immunocompromised.

“I understand that availability is variable, but if you have got them with you or can access them regularly, we do encourage you to do that,” she said.

She said people should also choose to socialise outside if possible. 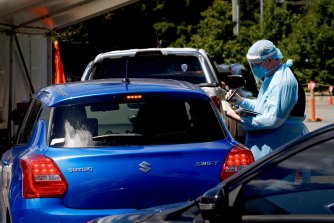 There were 832 coronavirus patients in hospital on Friday, an increase of 86 patients in one day. Sixty-nine patients were in intensive care.

Health Minister Brad Hazzard had previously warned NSW could hit 25,000 cases a day “by the end of January”.

The state’s public health orders were updated overnight to reflect changes to international testing and case and contact isolation agreed at yesterday’s national cabinet, where it was agreed to redefine a close contact as someone who has been with a confirmed COVID-19 case for more than four hours within an accommodation or care facility setting.

The isolation period for confirmed COVID-19 cases, except for those in South Australia, has also been cut from 10 to seven days.

In a statement on Friday, Prime Minister Scott Morrison confirmed leaders had further agreed to remove the requirement for a day six rapid antigen test for confirmed cases in isolation.

“If confirmed cases remain symptomatic, they should remain in isolation,” the national cabinet update reads. “Anyone with symptoms will continue to seek a PCR test.”

In an interview with 2GB radio after national cabinet, NSW Premier Dominic Perrottet confirmed NSW would also swap mandatory PCR testing to rapid antigen tests for vaccinated international travellers, in a move to “alleviate” the strain on testing clinics.

“That will relieve substantial pressure on the system because we’ve got around 5000 people flying into Sydney every day,” the Premier said.

Mr Hazzard amended the relevant public health order for international arrivals overnight, which includes that a person must undergo a PCR COVID-19 test “as soon as practicable” if they return a positive rapid antigen test result. The order came into effect on Friday.

He also signed off on amendments shortening the isolation period for coronavirus cases and close contacts to seven days.

A spokesperson for the NSW Premier said the state government was “working through the logistics” of its plans to provide free rapid tests at pharmacies and service stations, with more details to be announced shortly, after the Prime Minister said free tests could only be delivered at testing clinics.

NSW reported six deaths from COVID-19 on Friday, its highest figure in recent weeks. All were receiving hospital care for their infection.

The deceased included two fully vaccinated aged care residents, a woman in her 80s who acquired her infection at Fitzgerald Aged Care in Windsor and a man in his 70s who caught COVID-19 at Kilpatrick Court at Toronto.

Two men in their 70s, a woman in her 60s and a man in his 90s, all from Sydney, also died. One of the men in his 70s was unvaccinated and the woman had only received one dose of a COVID-19 vaccine.

Dr Chant said she viewed it as “a missed opportunity and a tragedy” when an unvaccinated person was admitted to intensive care. On Thursday, the Premier said 70 per cent of intensive care admissions were unvaccinated.

NSW Health on Friday morning reported there were 763 COVID-19 patients in hospital. At 10am, the department corrected this figure to 832.