The footage captured the moment a long convoy of Chinese armoured vehicles and tanks approached a packed beach in Fujian province to pull military equipment into the area. Fujian is the closest point in Chinese territory to Taiwan, and the move comes as US House of Representatives Speaker Nancy Pelosi undergoes a visit to Taipei.

The video, broadcast on Chinese television, shows images of a crowd of Chinese holidaymakers left shocked due to the arrival of a long convoy of Chinese tanks.

The tanks and other armoured vehicles are seen moving across the beach and heading to Fujian province in an attempt to pull military equipment into the area.

Pingtan is the largest island in Fujian province, which sits just 125 kilometres from Taiwan. 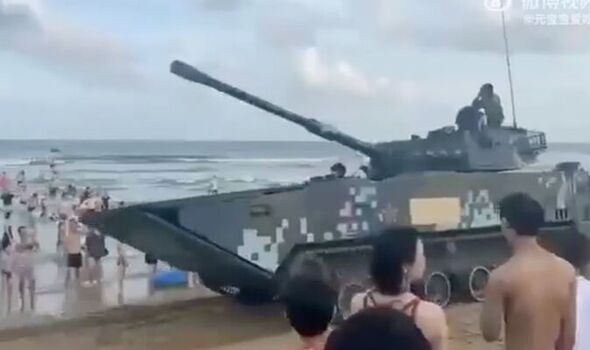 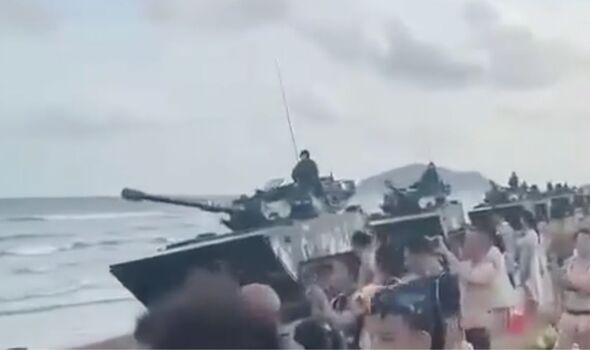 Besides the arrival of armoured vehicles, China has been recently conducting military exercises in the same area amid Speaker of the US House of Representatives Nancy Pelosi’s plans to visit Taiwan.

According to Xinhua news agency, on Saturday the ruling Communist Party’s military wing, the People’s Liberation Army, conducted “live-fire exercises” near Pingtan island from 8am to 9pm.

Despite the White House not having officially confirmed the visit, Ms Pelosi is expected to visit Taipei on Tuesday night.

He added: “Taiwan would make the most appropriate arrangements for any visitors”.

He said: “If Pelosi insists on visiting Taiwan, China will take resolute and strong measures to defend its sovereignty and territorial integrity.

He added: “Those who play with fire will perish by it. 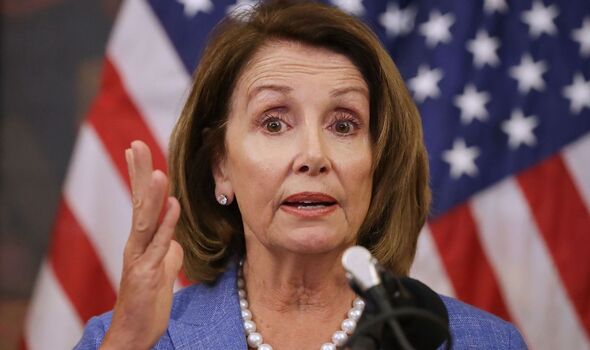 “We would like to once again admonish the US that we are fully prepared for any eventuality and the PLA will never sit idly by”.

In light of the warning, the White House’s National Security spokesperson John Kirby said: “We will not take the bait or engage in sabre rattling. At the same time, we will not be intimidated”.

On Monday, Mr Kirby also said that Ms Pelosi “has the right to visit Taiwan and to make her own decisions”.