Spectator who caused Tour de France’s biggest ever pile-up when she held up a sign saying ‘granny and grandad’ is fined £1,000 despite organisers withdrawing their complaint

The spectator who caused a massive pile-up at the Tour de France after holding up a sign for her grandparents in front of the cyclists has been fined £1,000.

The 31-year-old French woman, whose identity has been withheld, was also ordered to pay one symbolic euro to France’s professional cyclist association.

Prosecutors had asked for a four-month suspended jail term on the charges of endangering lives and causing unintentional injuries. 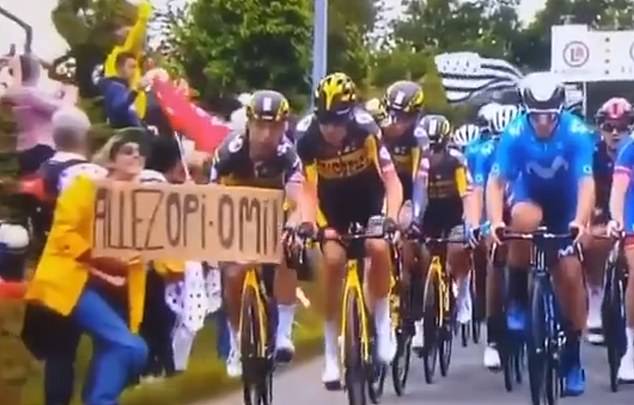 A roadside spectator (left) who caused a massive crash in the Tour de France has been fined £1,000 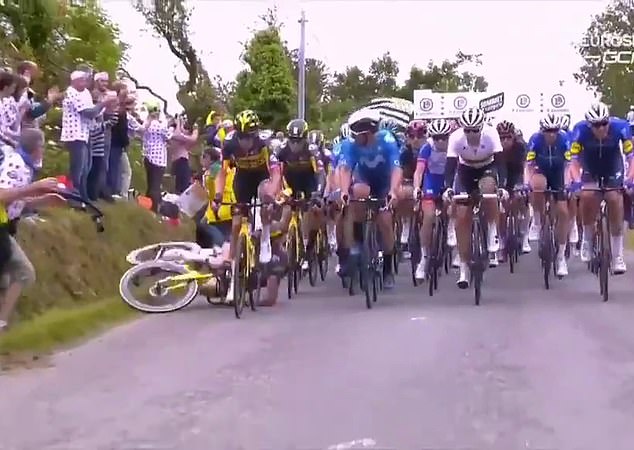 The supporter stepped out looking at the TV cameras and the pack of cyclists rode into her, causing a huge crash

Race organisers had previously withdrawn their complaint and called for everyone to ‘calm down’ after the woman faced a torrent of abuse.

Prosecutor Solenn Briand acknowledged that she recognised ‘how dangerous’ her conduct had been and had expressed regret.

She herself told the court that she felt ashamed at her ‘stupidity’.

The woman, who has no criminal record, had attended the opening Tour stage on June 26 with the goal of getting a sign noticed by TV cameras.

It read ‘Allez, Opi-Omi,’ the German terms for ‘grandpa and granny,’ a nod to her German-speaking grandparents who are fans of the race.

But she stepped out too far in front of the tightly packed peloton as it sped along a narrow road toward the finish in Landerneau in western France. 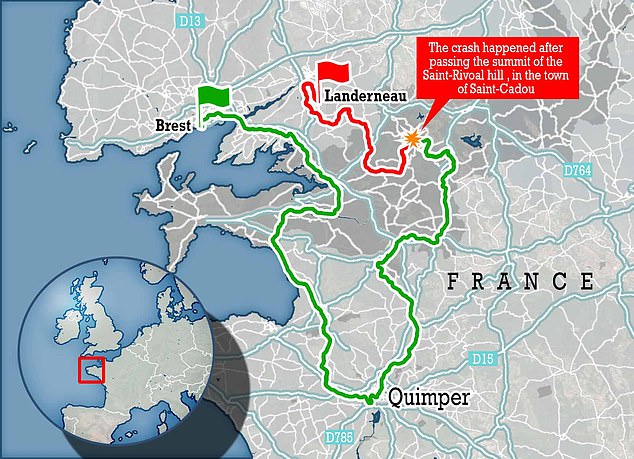 The massive crash took place near the summit of the Saint-Rivoal hill in the town of Saint-Cadou, some 30 miles from the end of the 123-mile race from the Atlantic port city of Brest 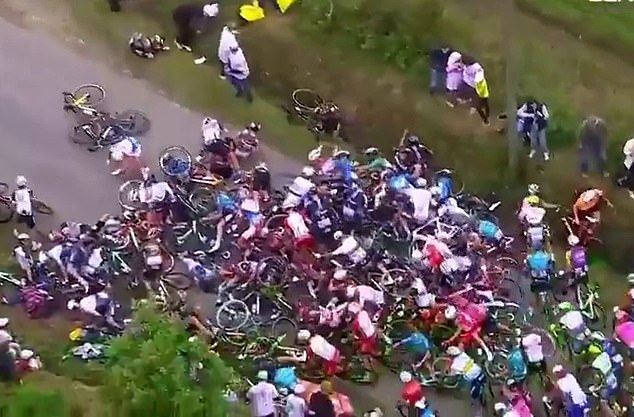 German rider Tony Martin was unable to avoid bumping into her and fell, forcing dozens of riders to crash while others swerved into the crowds of onlookers.

Video footage of the collision and scenes of medics tending stunned or grimacing victims sparked outrage among fans and race organisers, especially when they realised the woman had fled the scene instead of staying to help.

She remained in hiding for four days before turning herself in to police.

Several riders had to pull out of the race, including Spain’s Marc Soler, who broke both arms.

The woman’s lawyer, Julien Bradmetz, said his client had ‘a fragile personality for many years’. 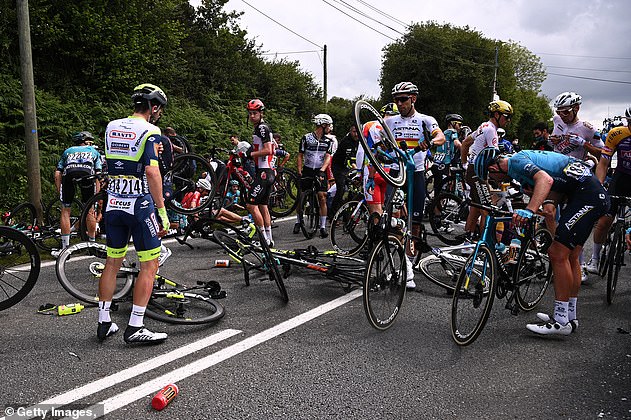 Riders survey the damage after the crash during the 108th Tour de France 2021, with many left bruised and battling injuries

‘This fragility has now increased tenfold so today my client is living through hell,’ he said.

German cyclist Tony Martin was the first to go down, and then there was a horrifying domino effect that ended in a tangle of bikes and bodies.

There were numerous wounds, including ones to Jasha Sütterlin, another German rider, who had to pull out of the entire contest.

The tour’s on-site surgeon Gilbert Versier, a three-star general operating out in Iraq and Afghanistan, said the aftermath of the crash resembled a war zone.

‘You can’t imagine so much breakage. In the midst of the commotion, the runners getting up and wanting to start again, the most serious cases must be identified. 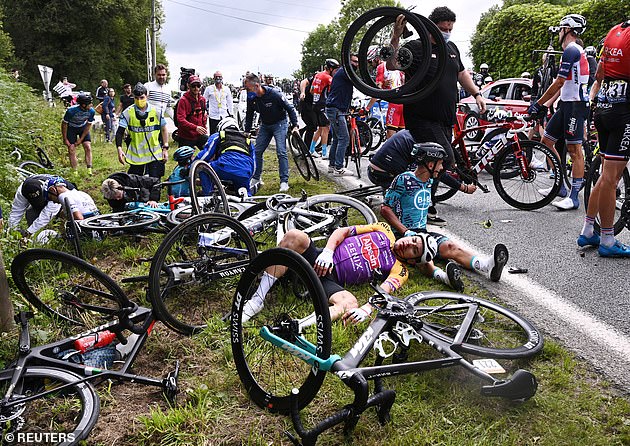 The crash has been labelled as one of the worst ever in the history of the Tour de France, which is in its 108th instalment 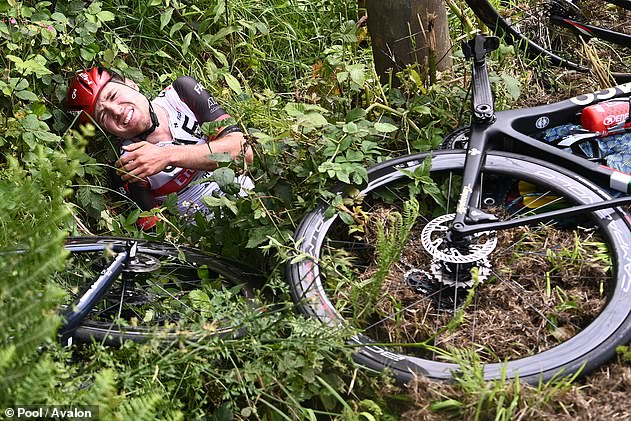 One of the cyclists, Swiss star Marc Hirschi, found himself thrown into the nearby hedges and he dislocated his shoulder

‘In general, these are the ones who are furthest from the accident site, because they have been thrown.’

Christian Prudhomme, director of the Tour, adopted a conciliatory stance over the case.

‘She did something daft, she’s no terrorist. We just want people to take care when they come to the Tour and remember they are there to see the champions and not to get on television,’ he told reporters.