97% of BTC supply currently comprises coins that have sat unspent on wallets for three months or more, and this strengthens the notion that many people are still sitting on their coins waiting for a future price uptick despite last week’s price pullbacks. Less and less volume of older BTC coins is being spent on-chain, according to an analytics report published today by Glassnode analysts.

“The implication is that HODLer cohorts are exhibiting steady maturation behavior, and activity on-chain is dominated by younger coins. Generally speaking, this demonstrates high conviction, despite extreme volatility and losses. Quite the contrast to this week’s price action.”

They expressed that the confidence among long-term holders despite weakness in the BTC market confirms that last week’s price downslide was largely instigated by a weak derivative market rather than spot sell-offs. It means this was a short-term correction rather than an overarching bearish trend for BTC.

However, additional analysis revealed that BTC price currently needs to find a booster from the broader market to break out from the $51,500 ceiling, with a major resistance possibly propping at $51,970. 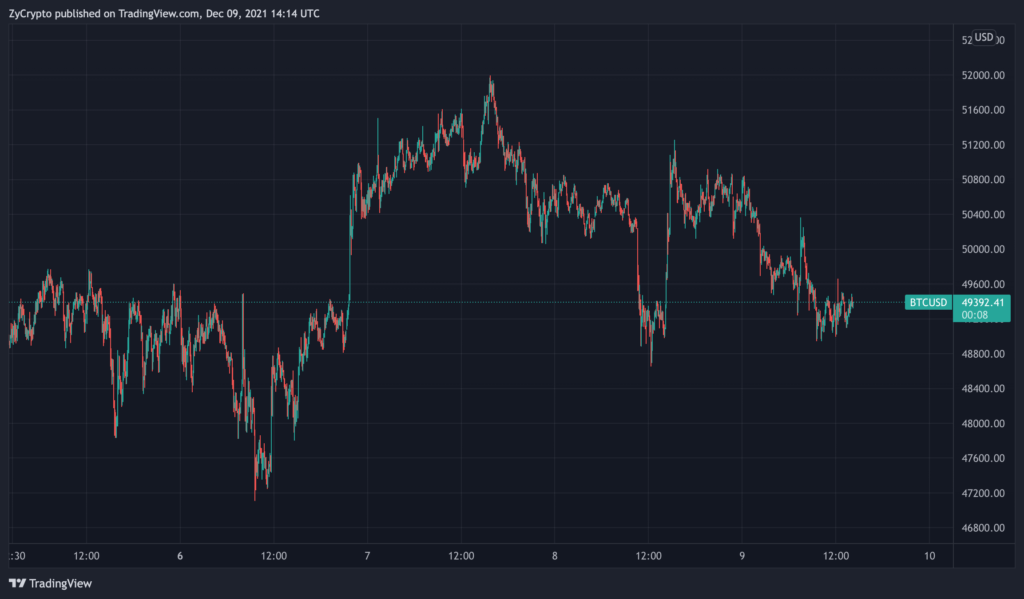 Glassnode analysts noted that the net BTC flow to exchanges was not elevated during last week’s price downslide. This means, they argue, that most of the spent coins are coming from short-term holders who are scrambling to react from last week’s market events that saw BTC price falling to a 30-days low of $46,581 on Saturday. This is ordinarily known as panic selling. Last week, $5.4 billion worth of open interest trades was liquidated with leveraged traders being hit the hardest.

“Through our observations of the data, last week’s sell-off was driven by liquidations in the futures market, and the various on-chain cohorts that make up Bitcoin’s supply remain largely unfazed. Those who are spending coins appear to be predominantly those who bought the top, and they are realizing losses and capitulating.”

The weekend flash out also coincided with a volatile trend on Wall Street, which some say showed that crypto assets are increasingly being tied to traditional assets rather than remaining an independent market. Additionally, despite BTC fundamentals not being shaken by last week’s massive price tumble, investor interest is waning as revealed by declining on-chain activity.