Russia to quit International Space Station due to economic sanctions

Russia is set to pull out of the International Space Station and will no longer work with NASA and the European Space Agency (ESA), according to the head of its space programme.

General Director of Roscosmos Dmitry Rogozin told Russian state TV earlier today that Moscow will no longer co-operate with its international partners aboard the ISS, confirming that the decision to withdraw has already been taken.

He said Roscosmos is not required to give an exact date of its withdrawal, but affirmed the Russian space programme will adhere to the stipulated year-long notice period.

‘The decision has been taken already, and we are not obliged to discuss it publicly, Rogozin told Rossiya 24 – though on Friday he said Russia would continue to work on the ISS ‘according to the time frame set out by our government, until at least 2024.’

It comes after Rogozin posted a storm of since-deleted tweets earlier this month in which he slammed Western sanctions imposed on Russia amid its invasion of Ukraine.

‘I believe that the restoration of normal relations between partners in the International Space Station and other joint projects is possible only with the complete and unconditional lifting of illegal sanctions,’ the space chief tweeted. 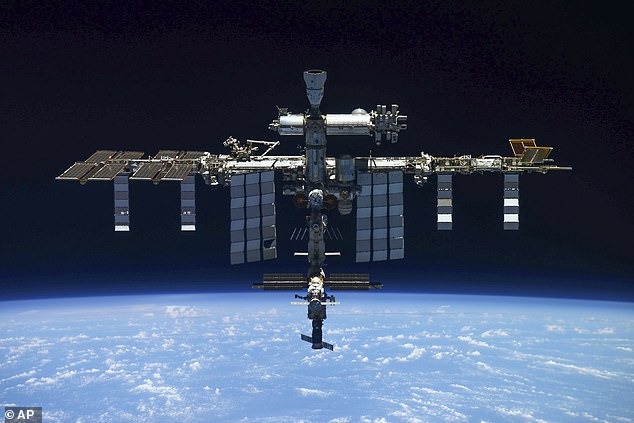 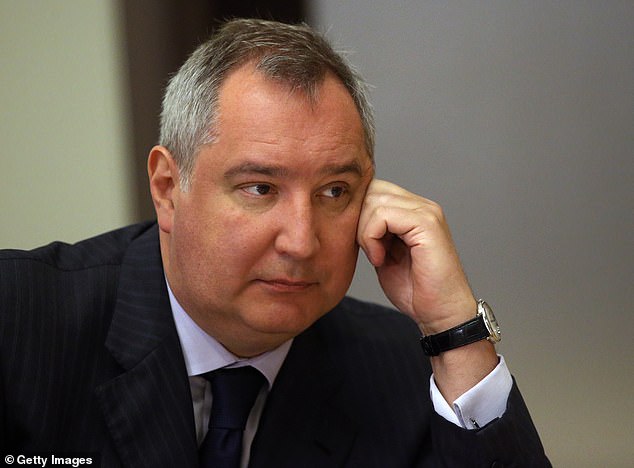 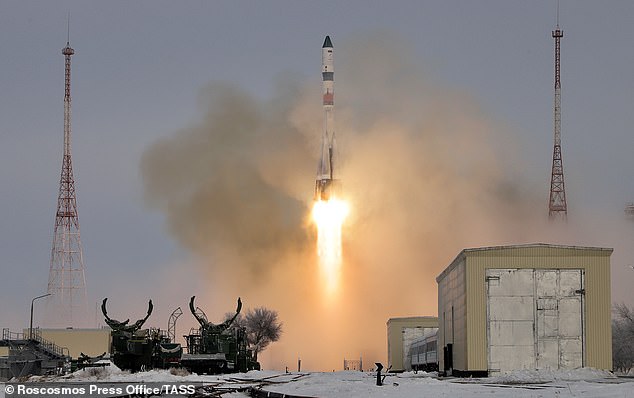 The U.S. and Russia were conducting negotiations for a resumption of shared flights in February, but the invasion of Ukraine put paid to the plans and triggered a wave of unprecedented sanctions on Russian state-linked entities (Russia’s Soyuz 2.1a rocket booster carrying the Progress MS-19 spacecraft lifts off from Baikonur Cosmodrome in Kazakhstan on Feb 15, 2022)

Space is one of the last remaining areas of cooperation between Moscow and Western nations, and Russia has for decades carried American astronauts to and from the ISS on board its Soyuz rockets, but ceased to do so in 2020.

The U.S. and Russia were conducting negotiations for a resumption of shared flights in February, but the invasion of Ukraine put paid to the plans and triggered a wave of unprecedented sanctions on Russian state-linked entities.

NASA astronaut Mark Vande Hei shared a Russian ride back to Earth in late March after a U.S. record 355 days at the ISS alongside two Russian cosmonauts, and suggested the relations between the crew aboard the ISS had remained unaffected by the war in Ukraine.

‘About my relationship with my Russian crewmates, they were, are and will continue to be very dear friends of mine,’ the American Vande Hei said during a press conference earlier this month.

‘We supported each other throughout everything,’ he said. ‘And I never had any concerns about my ability to continue working with them.’

But doubts remain over whether NASA, ESA and other space agencies will be able to maintain operations aboard the ISS without support from Russia.

Nathan Eismont, a leading researcher at the Space Research Institute of the Russian Academy of Sciences, said that the operation of the ISS would become almost impossible if Russia withdrew from the project.

The researcher’s statement echoed that of former cosmonaut and Roscosmos director Sergei Krikalev, who told Russian news site Izvestia that cooperation between Russian and American specialists in space is ‘necessary for productive work’ on the ISS.

The ISS is jointly managed by Moscow and Washington, and a complete Russian pull-out would pose major challenges for the operation. 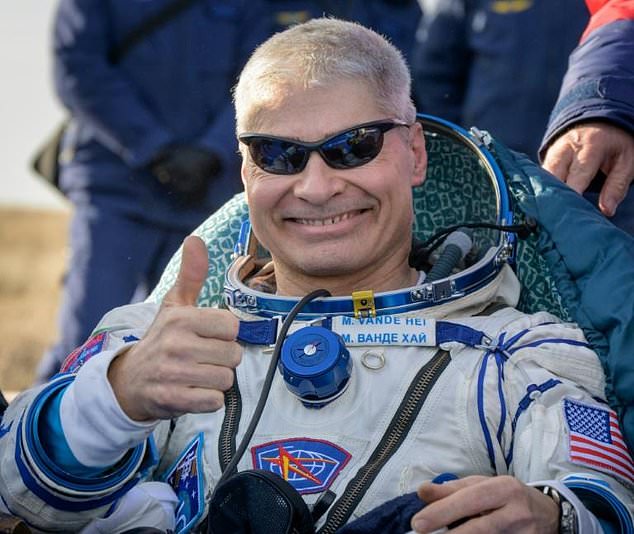 US astronaut Mark Vande Hei is seen in a NASA handout picture after the landing of the Soyuz MS-19 space capsule from the International Sapce Station in a remote area of Kazakhstan, on March 30, 2022 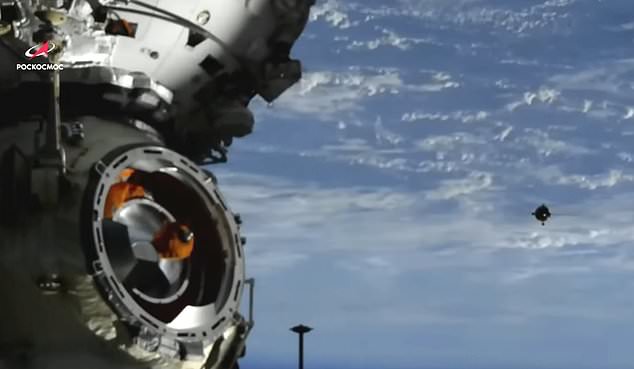 Russia’s Soyuz MS-21 space ship, right, approaches the International Space Station, ISS, during docking to the station, Friday, March 18, 2022. The ISS is jointly managed by Moscow and Washington, and a complete Russian pull-out would pose major challenges for the operation 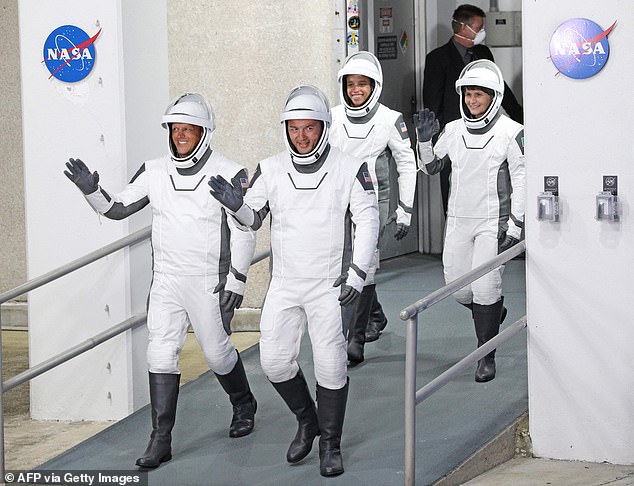 From left: Astronauts Bob Hines, Kjell Lindgren, Jessica Watkins and Samantha Cristoforetti walk out of the Neil A. Armstrong Operations and Checkout Building en route to launch aboard a SpaceX rocket at the Kennedy Space Center in Florida on April 27, 2022

Rogozin warned Washington earlier this month on Russian state TV that Moscow’s exit from the ISS would pose significant issues, because Russian rockets deliver much of the cargo needed to maintain the space station.

‘[Western partners] cannot manage without Russia, because no one but us can deliver fuel to the station,’ he said.

‘Only the engines of our cargo craft are able to correct the ISS´s orbit, keeping it safe from space debris.’

However, in recent years NASA has worked with private commercial entities, most notably Elon Musk’s SpaceX, to deliver cargo and conduct manned flights into space, which could help to reduce their reliance on Russia’s space programme to maintain the ISS.

SpaceX earlier this week launched four astronauts to the ISS for NASA, less than two days after completing a flight chartered by millionaires.

A week after the new crew arrives, three American astronauts and one German will return to Earth from the ISS, also aboard a SpaceX capsule.