London: The royal family has rebuffed claims made in Prince Harry and wife Meghan’s Netflix documentary series that members of the royal family declined to take part in it, amid the fallout from the release of the first three episodes.

While both Buckingham and Kensington Palace – the official households of the King and Queen consort and the Prince and Princess of Wales – refused to comment publicly about the program – several British media outlets have reported they have denied claims they were approached for a right of reply to the content of the six-part series which began streaming on Thursday. 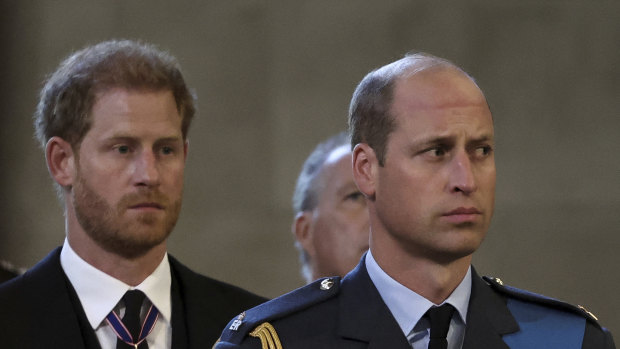 Harry took several thinly veiled swipes at his brother, William, the Prince of Wales during his Netlix documentary series. Credit:Reuters

The program displayed an on-screen statement at the start of the documentary that stated: “Members of the royal family declined to comment on the content within the series.”

In one of the episodes, Harry, the youngest son of the King, claimed there was a “huge level of unconscious bias” within the royal family and that Meghan said that her job as an actress “clouded” the judgment of the royals when she was first introduced to them.

Harry also directed a veiled swipe at his brother, who he suggested failed to see why Meghan needed protection from racist abuse in the UK both in the press and online. The pair said the palace instructed the couple to say nothing.

They both were critical of a report in the Daily Mail at the time, headlined: “Harry’s new girl is (almost) straight outta Compton”, a reference to the album by the rap group N.W.A.

In an apparent reference to William, he adds: “Some members of the family [said] ‘but my wife had to go through that, so why should your girlfriend be treated any differently, why should she get special treatment, why should she be protected?’ I said the difference here is the race element.”

The couple has claimed in the past that a member of the royal family speculated about the colour of their children’s skin because the Duchess is mixed race.

The much-hyped program threatens to drive a further wedge between the royals and Harry, 38, who has a strained relationship with his father and brother since he left Britain with his wife for California in 2020. The differences came to a head when the couple accused the royals of racism during a tell-all interview with Oprah Winfrey last March.

He has penned an autobiography, Spare, to be released in the New Year, with expectations it will be critical of his step-mother Camilla, the Queen Consort.

The Netflix documentary aired several claims from the Duke and Duchess of Sussex and commentators that Britain, the monarchy and the Commonwealth were racist, using the history of the British Empire, the treatment of the Windrush generation and the racially motivated murder of black teenager Stephen Lawrence in 1993, as examples. 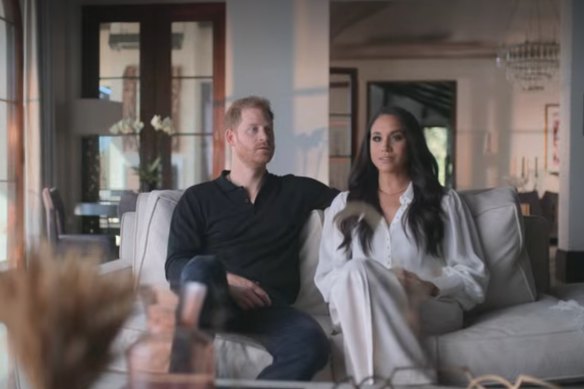 Harry and Meghan share their story in a new Netflix series.Credit:Netflix

Meghan said she had never before been “treated as a minority”, before he began dating Harry and moved to London.

“Obviously now people are aware of my race because they made it such an issue in the UK. But before that most people didn’t treat me like a black woman,” she said.

Buckingham Palace said it will not be commenting on “any aspect” of the series.

Both The Times and The Telegraph reported that royal aides at Buckingham Palace have refuted they were contacted for a right of reply before the program was aired, while Kensington Palace sources said an email containing some claims was received from a third party, but aides were unable to verify the sender’s authenticity.

The King made a public appearance on Thursday, joining the Archbishop of Canterbury for a reception in London, looking happy and relaxed just hours after the documentary began to stream.

He was joined by other religious leaders, met volunteers for the opening of a building in his name at King’s Cross, wishing community leaders a “blessed Christmas” and thanked them all for their hard work.

Netflix has released a trailer for the final three episodes of the series, which will focus on Harry and Meghan’s decision to step back from royal duties and leave the UK.