Ben Roberts-Smith told a “deliberate lie” to conceal his involvement in the alleged execution of an unarmed prisoner in Afghanistan, the war veteran’s defamation case has been told.

The Federal Court is hearing closing submissions in the defamation suit brought against The Age, The Sydney Morning Herald and The Canberra Times. The decorated former soldier claims the newspapers wrongly accused him of being complicit in war crimes and the media outlets are seeking to rely chiefly on a defence of truth. 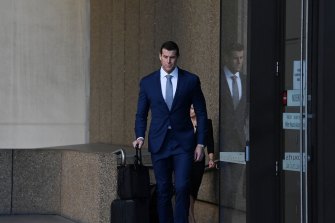 Ben Roberts-Smith outside the Federal Court in Sydney on Monday.Credit:Kate Geraghty

The newspapers allege Roberts-Smith was involved in the murder of five Afghan prisoners, including by directing an Afghan soldier working with Australian forces to order one of his subordinates to shoot an unarmed prisoner in October 2012. The media outlets say Roberts-Smith’s direction was relayed by the Afghan soldier, dubbed Person 12, and the man was shot dead by a second Afghan soldier.

Nicholas Owens, SC, acting for the newspapers, alleged on Wednesday there had been a “concerted effort” by Roberts-Smith and some of his witnesses to give “false evidence” about the alleged incident, but their efforts were “frustrated” when the Defence Department produced “a large volume of contradictory material” last year.

Person 14, a serving SAS soldier who gave evidence for the newspapers, has told the court he witnessed the alleged execution, but Roberts-Smith and a series of his witnesses have said Person 12 was not there on the day in question. Roberts-Smith has also denied giving any such direction.

Two of Roberts-Smith’s witnesses later admitted to making mistakes about the presence or otherwise of the Afghan soldier, but another former soldier said he was told in July 2012 that Person 12 had been “stood down from command” after an “incident”. Another witness for Roberts-Smith said the incident in question was that Person 12 had shot at a dog and unintentionally injured a soldier.

Roberts-Smith conceded in court on June 11 last year that, based on material produced by the Defence Department on the eve of the trial, his explanation in a written outline of evidence about Person 12 being stood down for shooting a dog was wrong. However, he maintained the Afghan soldier was not there.

Owens alleged Roberts-Smith’s claims about Person 12 were “a deliberate lie … which evidences a consciousness of guilt”. He submitted that Person 12 was present on the day in question “beyond a shadow of a doubt”, and the evidence of Person 14 was honest and accurate.

The “dog-shooting story” was “calculated to undermine the evidence” of Person 14, Owens said, and “remove Person 12 from the … mission”. The most probable inference that arose from multiple witnesses having the same “demonstrably false recollection” about Person 12 was “dishonest collusion”, he said.

Roberts-Smith’s credit was “seriously damaged, if not irretrievably” so, Owens said, because he had shown himself willing to swear false evidence “on matters squarely relevant to the substantive issues in the proceedings”.

He suggested Roberts-Smith was “afraid” that admitting Person 12 was there would make his guilt more probable, and there was “ample evidence” that it was a lie to claim the Afghan soldier was not there.

Roberts-Smith is suing the newspapers over a series of articles in 2018 that he says portray him as a war criminal who was complicit in the unlawful killing of unarmed Afghan prisoners. Under the rules of engagement that bound the SAS, prisoners could not be killed. The former SAS corporal maintains any killings happened lawfully in the heat of battle.

The newspapers are seeking to rely on a defence of truth and alleged in a written defence that Roberts-Smith was involved in six unlawful killings in Afghanistan between 2009 and 2012.

But the court has heard the newspapers accepted in written submissions they could not prove one of those murders because a former soldier they submitted was crucial to establishing the allegation, dubbed Person 66, objected to giving evidence on the grounds of self-incrimination. Roberts-Smith’s lawyers have said the allegation ought to have been withdrawn after Person 66 was not compelled to testify.