The UK’s Ministry of Defence revealed anti-Russian sentiment is growing which is “exacerbating the already significant challenges” Russian strongman Vladimir Putin faces following his illegal invasion of Ukraine. It comes after a Russian mayor in Ukraine settlement Velykyi Burluk was killed by a car bombing on July 11.

The MoD warned the targeting of officials would “escalate”.

The Ministry of Defence tweeted: “Anti-Russian sentiment in occupied Ukraine is leading to Russian and pro-Russian officials being targeted.

“The Russian-appointed administration in Velykyi Burluk acknowledged that one of its mayors was killed on July 11, 2022 by a car bombing. 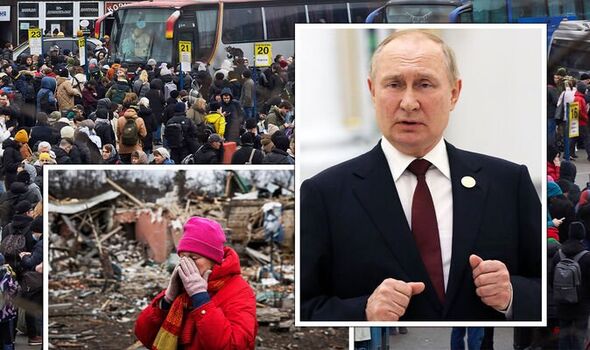 “The targeting of officials is likely to escalate, exacerbating the already significant challenges facing the Russian occupiers and potentially increasing the pressure on already reduced military and security formations.”

It comes after Russia’s defence ministry claimed its forces had shot down three Ukrainian military jets over eastern Ukraine.

They said Russian fighter jets destroyed an Su-25 and Su-24 – both Soviet-era jets used by the Ukrainian air force – over the Donetsk region of eastern Ukraine and a Mig-29, another Soviet-designed fighter aircraft, in the Mykolaiv region of southern Ukraine.

Moscow is understood to be running short of ammunition for its troops fighting in Donbas as Ukraine continues to hammer depots with long-range artillery provided by the West.

Ukraine has stepped up its long-range rocket attacks on Russian forces in southern Ukraine as Russia continues to pound the country’s east.

Ukraine struck Nova Kakhovka in the Kherson region, killing 52 people, according to the nation’s military.

But the town’s Russia-installed authorities said that at least seven people had been killed and around 70 injured, according to TASS news agency.

The strike came after Washington supplied Ukraine with advanced HIMARS mobile artillery systems which Kyiv says its forces are using with growing efficiency.

Ukraine’s southern military command said in statement: “Based on the results of our rocket and artillery units, the enemy lost 52 (people), an Msta-B howitzer, a mortar and seven armoured and other vehicles, as well as an ammunition depot in Nova Kakhovka.”

The area is of strategic importance because of its Black Sea access, once thriving agricultural industry and location just north of Russian-annexed Crimea.

Unverified videos posted on social media showed an immense fireball erupting into the night sky. Images released by Russian state media showed a wasteland covered in rubble and the remains of buildings.