'Playing cricket for Scotland meant everything': Haq fights back tears

‘Playing cricket for Scotland meant everything to me’: Emotional former cricketer Majid Haq fights back tears and reveals hope that future generations ‘never have to suffer the way I did’ – as damning report reveals ‘institutional racism’

Ex-Scotland cricketer Majid Haq fought back tears as he told a press conference ‘No one should suffer like I did’ in the wake of a damning report on racism in the sport.

The retired batsman and off spin bowler, 39, said he was publicly mocked by a coach after a vehicle he was in crashed.

They reportedly held up a picture of a busy street in Pakistan and suggested he should be a better driver.

That’s despite Haq being born in Paisley.

The tearful ex-player added that he had to ‘play twice as well as a white player to stand a chance’ – and that the racism suffered at Cricket Scotland affected his family.

Haq was sent home from the 2015 Cricket World Cup after he tweeted that it was ‘always tougher when you’re in the minority’. 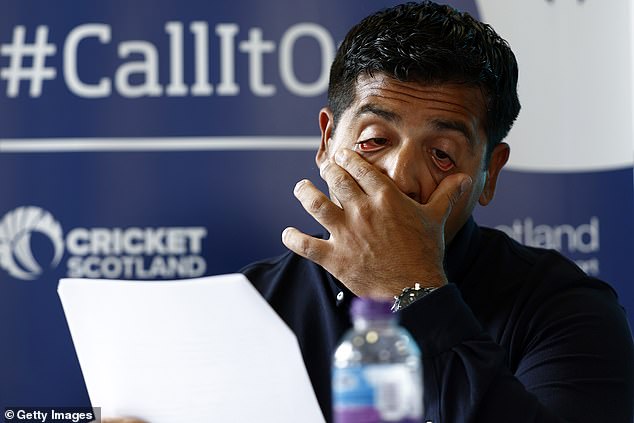 He told the press conference today that this was a ‘factually correct’ statement – but was forced to apologise for it nevertheless.

He compared it with treatment of other, white, players who had been sacked from the national squad while on tour but Cricket Scotland soon made a U-turn and brought them back.

Mr Haq, who never played for Scotland again, said: ‘I was made to say sorry and go public saying sorry when I didn’t commit a crime.’

Fellow ex-player Qasim Sheikh added that his inclusion in the Scotland squad was ‘tokenistic’ and that he had to carry the team’s drinks.

‘This saw me get selected for the World Cup qualifiers playing for Scotland, a moment I was really proud of, but what it turned out to be was tokenistic to me.

‘I carried drinks for the whole tour. It became a running joke among players and I felt humiliated and I felt I was treated as a personal servant at times, even criticised how I would make certain player’s drinks.’

Sheikh also said he first suffered racism within the sport when he was just 15 years old, and how ‘racism just seems to get brushed under the carpet’.

‘Playing for the national team was everything I dreamed of however I don’t feel I was treated equally,’ he said, and added how he was referred to as ‘you lot’ because of his race.

The pair’s sickening testimony came as an inquiry by consultancy Plan4Sport found no fewer than 448 instances of institutional racism.

Managing director Louise Tideswell declared it was clear the ‘governance and leadership practices of Cricket Scotland have been institutionally racist’.

‘The reality is that the leadership of the organisation failed to see the problems and, in failing to do so, enabled a culture of racially aggravated micro-aggressions to develop.’

One referral has already been made to Police Scotland – and more could be on the way.

The governing body will now be placed in ‘special measures’ until at least October 2023, by which time it is expected to develop an action plan and address immediate concerns.

Should it fail to do so, it could have its funding from Sportscotland withdrawn. In the last year, Cricket Scotland has received about £460,000 from the government agency.

Within the report, recurring themes were mapped against 31 indicators of institutional racism, with a whopping 29 failing to meet the standard required and only two partially meeting the standard. 68 individual concerns have been referred for further investigation.

These relate to 31 allegations of racism against 15 different people, two clubs and one Regional Association. In some instances, multiple concerns have been raised against individuals.

Some of these alleged incidents are recent while others were not.

These investigations are expected to be concluded in due course.

Aamer Anwar, the solicitor for Sheikh and Haq, described the Plan4Sport report as the ‘most devastating verdict to be delivered on any sporting institution in the United Kingdom’.

He called for a meeting with the Scottish Government and the current Scotland players as to why they had not spoken up in favour of his clients.

He added: ‘The board’s resignations are welcome, but that is the barest minimum.

‘Cricket Scotland took the cowardly option of resigning 24 hours before publication, meaning there is nobody to answer for their failure of leadership, institutional racism and abuse of the values of integrity, fairness and equality.’