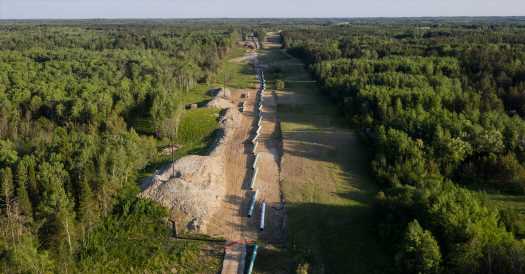 PARK RAPIDS, MINN. — The protesters gathering in the boreal forests of Northern Minnesota have come from across the country — Native American tribes and their supporters, environmentalists and religious leaders — all to halt Line 3, a $9 billion pipeline that would carry hundreds of thousands of barrels of oil through Minnesota’s delicate watersheds and tribal lands.

Some said they had come ready to risk arrest by lying down in the path of construction. Others said they were here to support tribes that have been battling oil and gas pipelines for years, including the highly contentious Dakota Access Pipeline.

Early Monday, dozens of activists used an old fishing boat, bamboo and steel cable to blockade the road to a construction site off Highway 71 north of Park Rapids.. Several hundred others scaled the wall of a nearby work station and occupied the site, some climbing atop diggers and transformer boxes or chaining themselves to construction equipment, before starting to move up the highway as police deputies circled.

“In hope and prayer, we find ourselves. In hope and prayer, here I am,” the protesters chanted to the beat of a drum. Over the weekend and into Monday, some 1,500 people took part in drum circles and prayer gatherings, and surveyed the network of construction sites that dot the woods.

“Taking care of the water is our responsibility, and we take that responsibility seriously,” said Winona LaDuke, executive director and a co-founder of Honor the Earth, a Native environmental advocacy organization that is a lead group opposed to the pipeline. “We’ve been at this fight against Enbridge for seven years already. It’s like it’s like an invasion.”

Behind the scenes, they said, Native lawyers have been urging the Biden administration to intervene, flexing the newfound political clout of tribal nations that now have increasing numbers of members in influential government positions — and are prepared to hold Mr. Biden to his campaign promises on racial equity, particularly for Native Americans.

Approved in the Trump administration’s final days, the project, a new 340-mile portion of a wider pipeline network, would carry 760,000 barrels of tar-sands oil a day from Alberta, Canada, across northern Minnesota, and into Wisconsin to the tip of Lake Superior, the world’s largest freshwater lake.

Enbridge, the Canadian company behind Line 3, restarted work on the pipeline this month after a pause in construction caused by muddy conditions. In April, Enbridge’s chief executive, Al Monaco, said Line 3 was on schedule to be completed by the end of the year.

But Native American tribes see the construction as a violation of their tribal sovereignty, an issue that President Biden explicitly pledged to prioritize during his campaign. 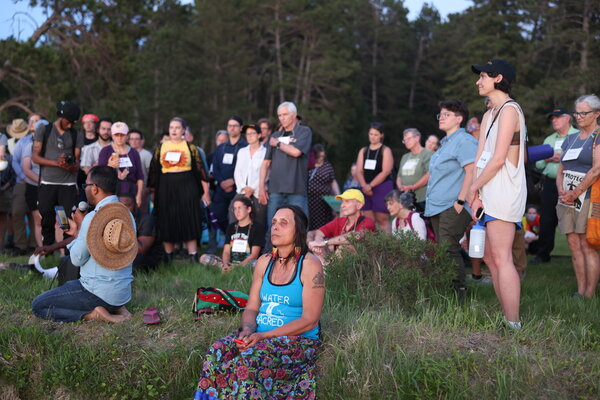 The pipeline would pass through treaty-protected tribal lands, they stress, including watersheds that support wild rice, a staple food and important cultural heritage of the Ojibwe People. And in the event of a spill, the heavy oil traveling through the pipeline could sink to the bottom of rivers and streams, complicating a cleanup, environmental groups warn.

In recent years, protesters have also faced a growing number of local bills, backed by the oil and gas industry, that in many cases criminalizes trespassing and “impeding” on the operation of pipelines and other “critical infrastructure.” The Northern Lights Task Force, local police officers funded by Enbridge under state permits, have arrested more than 70 protesters since construction began on Dec. 1, according to a task force tally.

In his first week as president, Mr. Biden signed an executive order vowing to address climate change, rejoined the Paris climate agreement among the nations of the world, and canceled another pipeline, the Keystone XL, which would also have brought tar-sands oil, one of the dirtiest forms of energy, from Canada. He also recently suspended oil drilling leases in the Arctic National Wildlife Refuge.

At the same time, the Biden administration has defended a huge Trump-era drilling project and has taken other actions that could guarantee the drilling and burning of oil and gas for decades. And the president has so far stayed silent on Line 3, which would add nearly 200 million tons of greenhouse gases to the atmosphere each year during the pipeline’s lifetime, according to the project’s Final Environmental Impact Statement. That’s the equivalent impact of annual emissions from 45 coal-fired power plants, or 38 million cars.

The project brings into sharp relief a question highlighted in a recent report from the International Energy Agency: At a time the world is trying to stave off the worst effects of climate change, just how much new oil and gas infrastructure is needed?

“Particularly from a climate standpoint, the case for a brand-new, massive tar-sands pipeline is extremely thin and frankly nonexistent,” said Moneen Nasmith, an attorney with the environmental legal organization, EarthJustice, which is challenging the pipeline. “Now is the time to do better by tribes, to take climate change seriously, to take environmental considerations seriously.”

“We recognize people have strong feelings about the energy we all use, and they have the right to express their opinions legally and peacefully,” Michael Barnes, a spokesman for Enbridge, said in an email. “We hoped all parties would come to accept the outcome of the thorough, science-based review and multiple approvals of the project. Line 3 has passed every test through six years of regulatory and permitting review,” he said.

So far, protests have had little effect on construction, which began in December and was 60 percent complete, he said. Construction was continuing at the “vast majority” of work sites Monday, he said.

Built in the 1960s, the current crude oil pipeline has been beset with corrosion, leaks and spills, forcing Enbridge in 2008 to reduce its capacity by half, to 390,000 barrels a day. In 2015, Enbridge cited corroding pipes and future oil demand to say it would reroute Line 3, a move that would allow it to restore its original capacity.

Opponents have thrown up a number of legal challenges. A decision is expected this month on one case, filed in Minnesota state court by tribes and environmental groups, which has focused on whether Enbridge carried out an adequate environmental review of the project. Oral arguments also focused on whether there was evidence of enough long-term demand for oil from Line 3.

Two other cases challenge the project’s permits, issued by the Army Corps of Engineers, under the Clean Air Act. Opponents argue that the Army Corps failed to fully consider how an oil spill would affect the Lake Superior watershed.

Native lawyers and lobbyists have also been working their Washington connections. Late last month, Tara Houska, a tribal attorney, former lobbyist and member of the Couchiching First Nation Anishinaabe along the Canadian border, pressed top Biden officials on what she saw as policy hypocrisy: Having canceled Keystone XL, how could the administration then allow Line 3 to go forward?

“This is a huge project with huge climate implications,” Ms. Houska said she told Gina McCarthy, the White House domestic climate adviser, and David Hayes, who advises Mr. Biden on land and water use policy. “You can’t cancel Keystone and then build an almost identical tar sands pipeline,” she said.

A White House spokesman declined to comment on the meeting.

Many Native American voters are also prepared to hold Mr. Biden to his promises to uphold their tribal sovereignty, Ms. Houska said. “I think it’s very critical that a campaign that has a tribal platform follows through on those promises.”

Tribal leaders are hoping that Interior Secretary Deb Haaland, who made history as the first Native American Cabinet member, will also be influential in Mr. Biden’s decision on the Enbridge pipeline.

Ms. Haaland’s public views on oil pipelines are well known: In 2016, Ms. Haaland joined the Standing Rock Sioux protesters in North Dakota who camped out for months in opposition to the Dakota Access oil pipeline. Many of the tribal groups with whom Ms. Haaland protested as an activist are among those now urging the administration to block the Enbridge pipeline.

A spokeswoman for the Interior Department declined to comment on the role that Ms. Haaland might play in determining the fate of Line 3.

Meanwhile, one of the most senior officials with authority to determine whether pipeline permits could be reviewed or rescinded is Jaime Pinkham, the Army Corps of Engineers’ acting Assistant Secretary of Civil Works, who is a member of the Pacific Northwest’s Nez Perce Tribe. In 2016, Mr. Pinkham co-wrote an opinion piece in the Chicago Tribune opposing the construction of the Dakota Access pipeline.

Mr. Pinkham’s staff did not respond to an email and voice mail requesting comment.

“The point has been for a long time to get to at least where we had the ear of those who were making decisions of consequence on tribal sovereignty, and then to get Native people in positions to make the decisions that impact us,” said Julian Brave NoiseCat, a Native activist who played a key role in the campaign urging Mr. Biden to nominate Secretary Haaland. “Hopefully that means that more of these decisions will be made to the benefit and with respect for tribal sovereignty.”