Pack animals: Tyrannosaurs not so solitary after all

Washington: Tyrannosaurs probably hunted in packs, scientists announced after analysing fossils unearthed in Grand Staircase-Escalante National Monument in Utah, a conclusion challenging long-held assumptions that the dinosaurs were solitary predators. The new findings could provide fresh support for the administration of US President Joe Biden as it considers expanding the boundaries of a protected area that his predecessor, Donald Trump, cut in half in 2017.

The surprising discovery in the monument’s Rainbows and Unicorns Quarry – so nicknamed because researchers have unearthed a bounty of key finds there – provides fresh evidence that tyrannosaurs were social predators. The research team evaluated physical and chemical elements to determine that four or five Teratophoneus (pronounced Ter-at-oe-foh-nee-us) died together during a seasonal flood that washed their carcasses into a lake. The bones, which sat largely undisturbed for a lengthy period, were later shifted as a river churned its way through the area before evaporating. 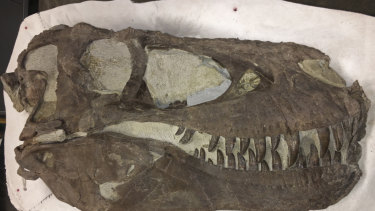 A “Hollywood” dinosaur specimen discovered approximately near the Rainbows and Unicorns Quarry on Grand Sta-Escalante National Monument in Utah.Credit:AP

“A lot of researchers feel like these animals simply didn’t have the brain power to engage in such complex behaviour,” palaeontologist Alan Titus, who discovered the quarry site in 2014, told reporters in an online briefing. But this discovery, along with other recent findings, suggests otherwise, he said. “This must be reflecting some sort of behaviour and not just a freak event happening over and over again.”

The monument, which covers more than 400,000 hectares of federal Bureau of Land Management terrain, provides a nearly complete snapshot of the late Cretaceous period from roughly 95 million to 74 million years ago. Shortly after this period, the impact of volcanic eruptions and an asteroid collision with Earth triggered climate change and a massive extinction.

The bones at the heart of the latest discovery suggest a dinosaur family that ranged from roughly 4 to 22 years of age and was hunting together when all died. “There it is, a very sad day in southern Utah 76.4 million years ago,” said Titus, who works for the BLM Paria River District.

The researchers are still exploring why the tyrannosaurs would have hunted together but say a collective effort helped them compete against large, plant-eating dinosaurs. 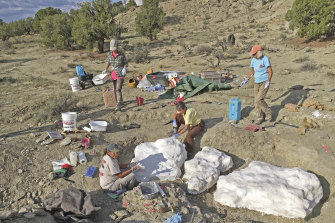 Researchers prepare fossils to be airlifted from the Rainbows and Unicorns Quarry on Grand Staircase-Escalante National Monument to the Paria River District paleontology lab in Kanab, Utah.Credit:AP

“This discovery should be the tipping point for reconsidering how these top carnivores behaved and hunted across the Northern Hemisphere during the Cretaceous,” said Joe Sertich, dinosaur curator at the Denver Museum of Nature & Science and one of the project contributors.

The quarry is the first tyrannosaur mass death site found in the southern United States. The researchers, who published their findings Monday in the scientific journal PeerJ, analysed rare earth elements, stable isotopes and charcoal concentrations to show that the dinosaurs died together.

The location of the discovery lies in the Kaiparowits Unit of the current monument, which remains federally protected. Under Trump’s proclamation, two of the ancient rock layers that once were within its boundaries – the Tropic Shale and Straight Cliffs Formation – were almost entirely removed from protection. 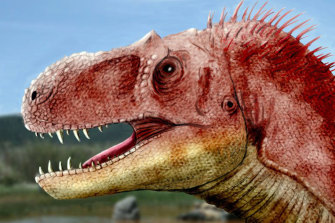 Interior Secretary Deb Haaland, who travelled to Utah this month to survey the two national monuments Trump reduced, spent an hour in Grand Staircase-Escalante, where she met with Titus, who showed her fossils found there. “She was quite inquisitive,” Titus said.

The BLM has continued to protect such remnants of the past even as controversy swirled over the monument’s size. “They’re basically our heritage, our ancient heritage,” Titus said. “They’re part of the story of how North America came to be and how we came to be. And we take that very seriously.”

Haaland has not said whether the administration will restore the original boundaries of either Grand Staircase-Escalante or Bears Ears National Monument, a site that is sacred to several tribes and that Trump cut by nearly 85 per cent.

“How we manage public lands and national monuments is important, not just to the tribes and ranchers and elected leaders and others who I met with this week but to the many generations to come,” she said at the conclusion of her trip.”