THE official coronavirus R rate has dipped slightly in England as infections continue to fall.

As Brits look forward to new freedoms this weekend, Government scientists at Sage say the R rate in England is currently between 0.7 to 1.0. 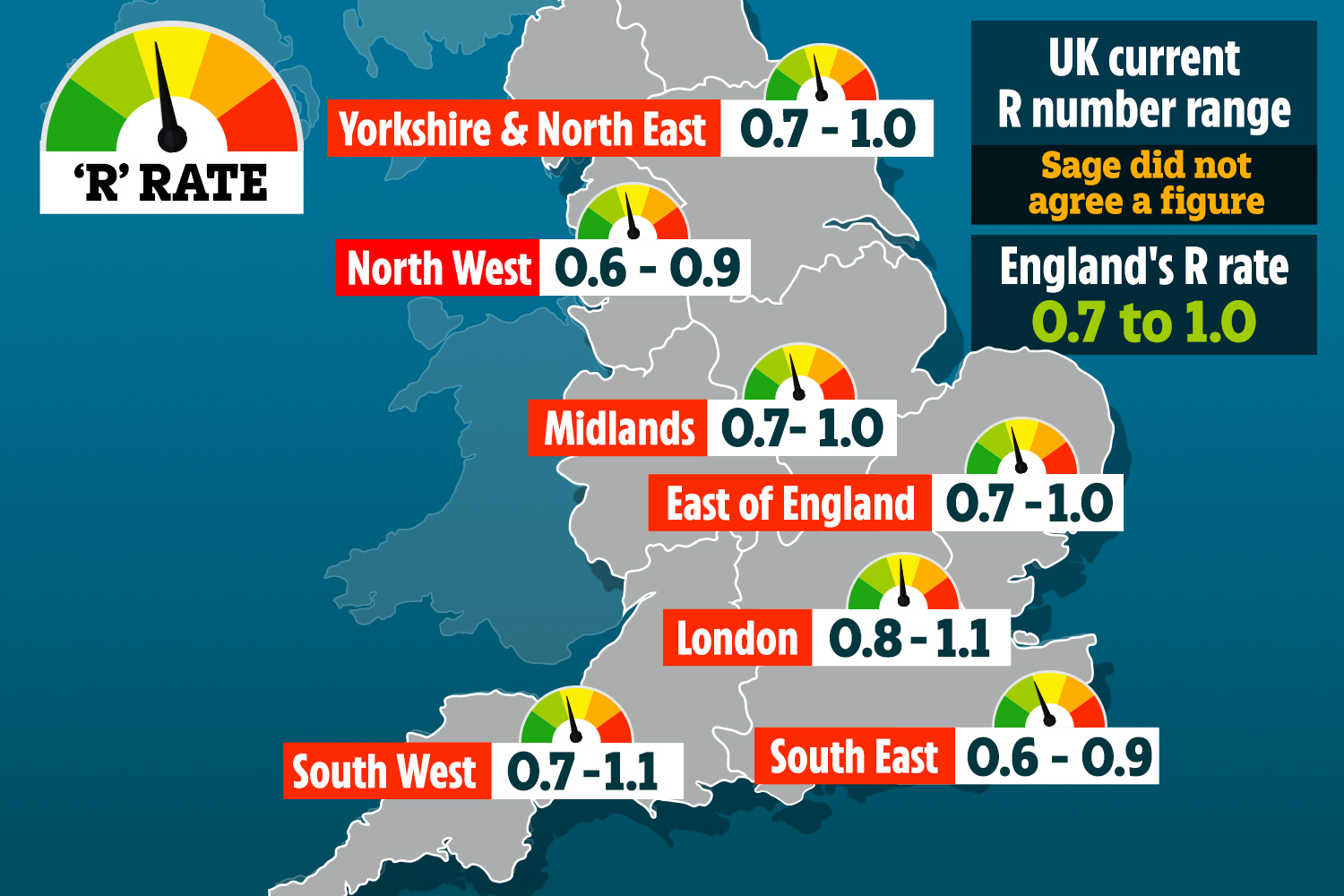 For the previous three weeks, the R rate for England has been estimated to be between 0.8 and 1.

Last week Sage failed to agree on the figure for across the UK for the second time, and have said again they cannot give a reliable number.

The team said it because case numbers are so low, the margin of error becomes bigger.

The R rate has remained relatively constant and below 1 since February 5, having peaked on January 15 at between 1.2 and 1.3.

The value reflects the outbreak with a slight lag, as it takes up to three weeks for changes in the spread of the disease to be clear.

Therefore the estimates today won’t account for any impact of beer gardens, zoos and gyms reopening.

But it could factor in any change caused by the Rule of six, which came into force in England on March 29.

Meanwhile, experts say that cases of the coronavirus are the lowest since September 19.

Around one in 480 people were estimated to have Covid England in the week to April 10, according to the latest estimates from the Office for National Statistics (ONS). 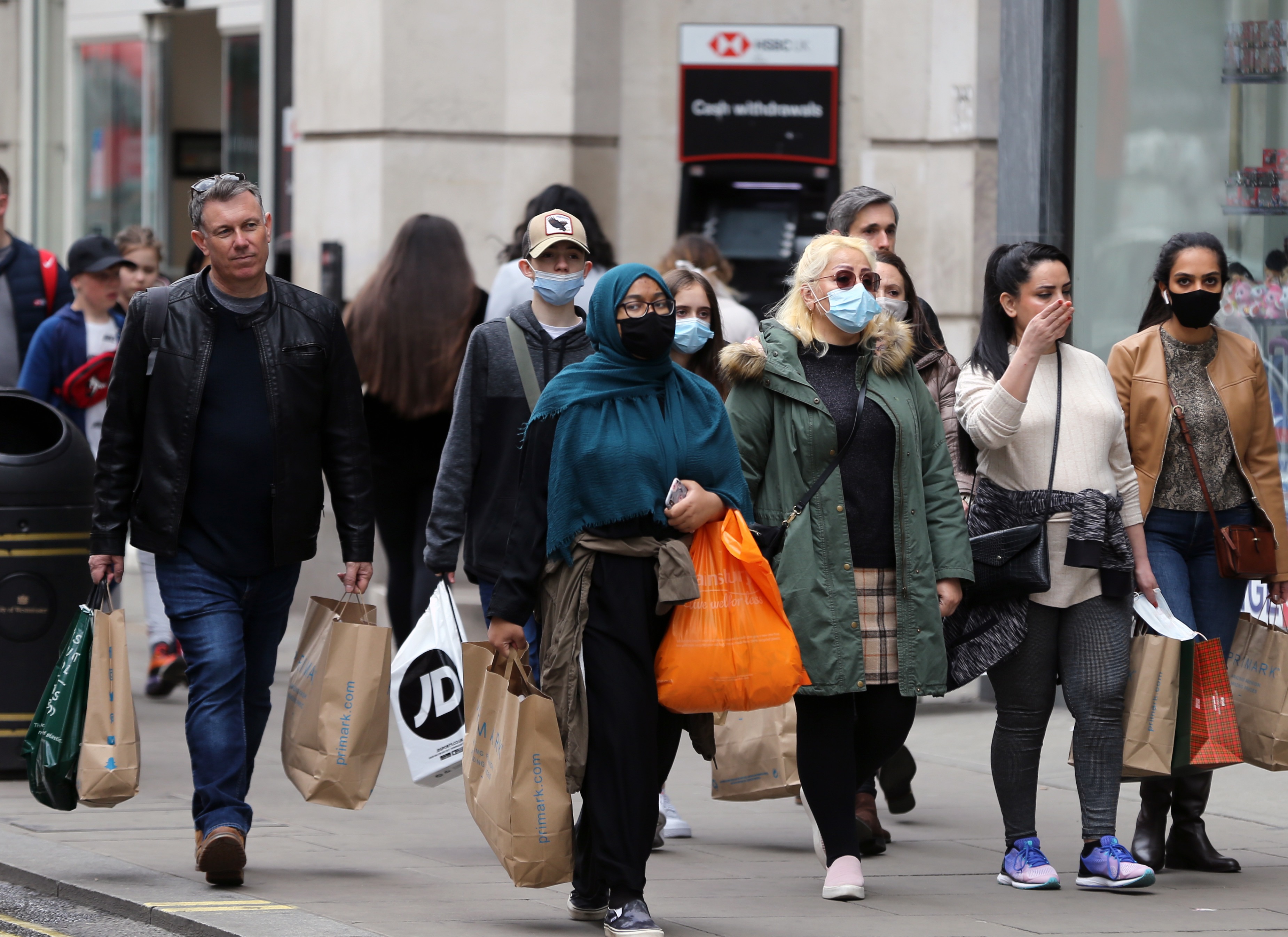 The R represents the number of people an infected person will pass Covid on to, meaning currently, every patient is passing the virus onto less than one other person.

The R number can be suppressed by limiting social contacts which is why lockdowns have been used.

But as society opens back up, it will undoubtedly rise as people socialise with more friends and family, increasing the risk of Covid spread.

However with the triumph of vaccines, cases should remain low overall – but this is not guaranteed.

Looking at the regional values of the R rate and London currently has the highest range between 0.8 and 1.1.

The East of England, the Midlands, and the North East and Yorkshire all currently sit between 0.7 and 1.0.

The ONS data also revealed today that in Wales, around one in 920 people is estimated to have had Covid-19 in the week to April 10 – down from one in 800 in the previous week, and the lowest since the week to September 10.

In Northern Ireland, the estimate is around one in 710 people, down from one in 300 in the previous week.

Predictions for both Northern Ireland and Scotland are the lowest they have ever been since records were started by ONS in October. 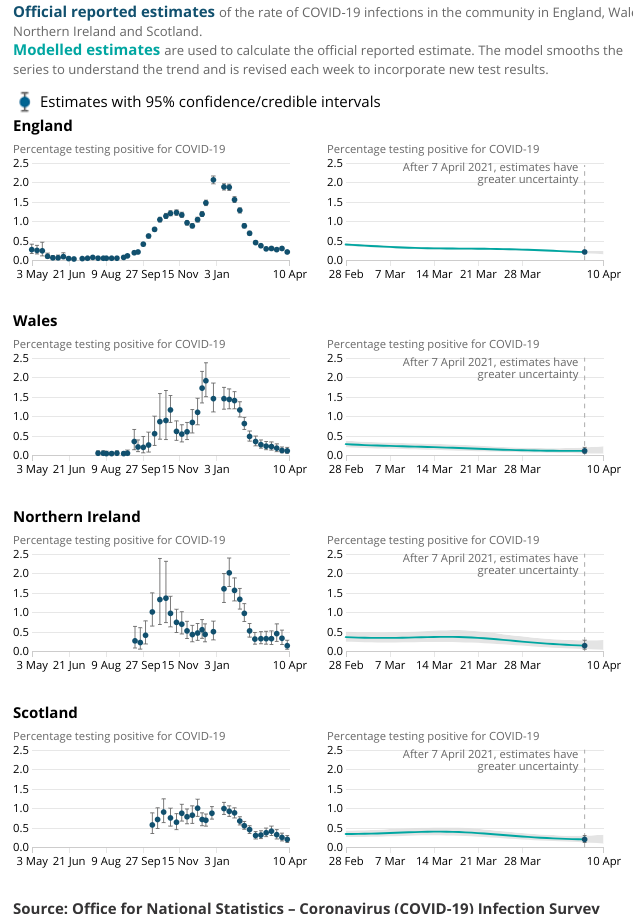 The figures represent cases in private homes across the UK, both symptomatic and asymptomatic – when a person carries the virus with no symptoms.

Another infection survey of only symptomatic cases revealed that currently, around one in every 2,000 people in the UK have Covid with symptoms.

According to the ZOE COVID Symptom Study UK Infection Survey figures, roughly 1,600 people are coming down with symptoms of the virus each day.

The study, led by researchers at King’s College London (KCL) estimated the UK’s R value is 0.8, and as low as 0.3 in the South West and West Midlands.

Tim Spector OBE, lead scientist on app and professor of genetic epidemiology at KCL, said: “As the UK slowly exits lockdown, I’m encouraged to see COVID cases continue to fall with our rates among the lowest in Europe.

“In fact, the UK closely mirrors cases in Israel with its exemplar vaccine programme.

“Based on our data and countries like Israel, I believe the fall in cases since January is mainly thanks to the vaccination programme and less about the strict lockdown the UK has been under since late December.”

His comments come after the Prime Minister Boris Johnson said it was the lockdown in England that had driven cases down the most.

Prof Spector added: “With up to 60 per cent of the population vaccinated and around 5-10 per cent with natural immunity due to infection, we’re starting to see herd immunity take effect.

“This should prevent future large-scale outbreaks. However, we do expect to see smaller, manageable outbreaks in the coming weeks and months among groups which are yet to be vaccinated.”

The argument of “herd immunity”, and whether it has been reached in the UK, is highly contested.