Rishi rises to the occasion! Moment new PM appears to suddenly levitate as he celebrates winning the race to No10… but Twitter users are baffled

This is the moment the newly crowned Prime Minister Rishi Sunak appeared to suddenly levitate as he celebrated winning the race to No10.

Mr Sunak, 42, became Leader of the Conservative Party today after Boris Johnson’s shock withdrawal last night was followed up by his sole rival Penny Mordaunt pulling out earlier after she failed to make the threshold of 100 nominations.

But during the celebrations, the MP for Richmond (Yorkshire) was filmed suddenly appearing to gain an inch or two as he waved to his fellow Tory MPs at the Conservative Party HQ after becoming Britain’s first non-white and Hindu PM on a day which coincided with the religious festival Diwali.

Mr Sunak, who is reportedly 5ft 6in, left Twitter users baffled as he appeared to levitate while the camera was focusing in on him in the crowd.

In the video, the Tory leader is cheered by delighted supporters who he hugs and shakes hands with before departing. 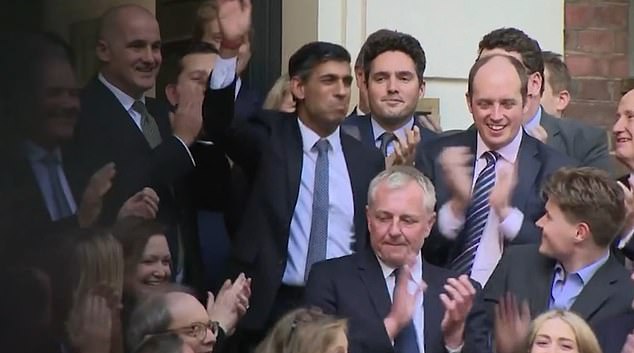 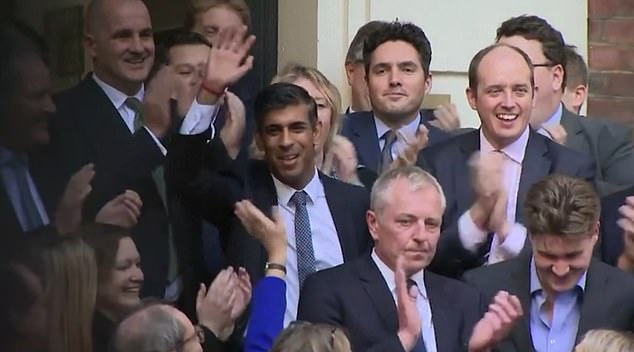 Mr Sunak, who is reportedly 5ft 6in, left Twitter users baffled as he appeared to grow while the camera was focusing in on him in the crowd

Many joked that he had replicated stepping on a mushroom as seen in Super Mario Bros where players are given an immediate boost in height.

Meanwhile others took the opportunity to make witty remarks at the incoming PM. One joked ‘It’s called levelling up’ while another added: ‘well they did promise growth’.

Others however were simply left stunned at how he had managed to grow. One user said: ‘All joking aside, the more you watch that, the more bizarre it seems! He doesn’t appear to step up onto anything, or anyone lift him, serious, how did that happen?’.

Mr Sunak baffled Twitter users who could not work out how he suddenly appeared to levitate. Some joked that it replicated stepping on a mushroom in Super Mario Bros while others referenced the Tory promises of ‘growth’ and ‘levelling up’

Some suggested that he may have been walking backwards up some steps which gave the illusion of levitating while others joked a box had been put in place below his feet.

Height is no bar to leadership though: former PM Winston Churchill, was just 5ft 5in.

Speaking to a camera at the HQ, Mr Sunak said the UK is a ‘great country’ and vowed to work ‘day in and day out’, but pointed to serious economic problems. 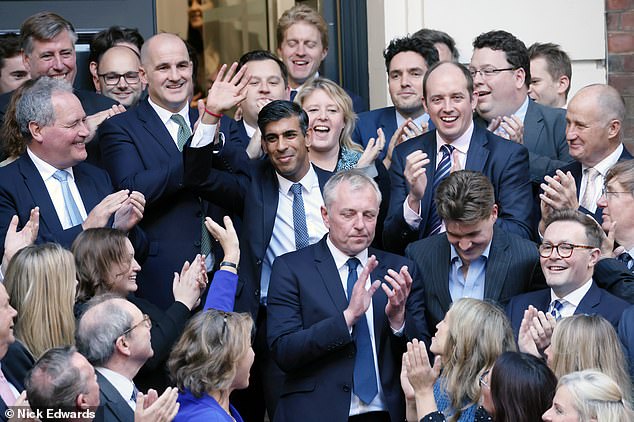 Speaking to a camera inside Conservative HQ after being welcomed by MPs (pictured), Rishi Sunak said the UK is a ‘great country’ and vowed to work ‘day in and day out’, but pointed to serious economic problems

He pledged to run No10 with ‘integrity and humility’ today but warned of ‘profound challenges’ to come after being handed the keys to Downing Street.

The new premier received a rapturous reception when he made a 10-minute private speech to MPs at Parliament, telling his troops that Mr Johnson, Ms Mordaunt and Ms Truss were ‘all good Conservative colleagues and friends’, adding: ‘We’re united behind the policy and now cannot afford the indulgence of division over personality.

Mr Sunak is expected to be formally installed as PM by King Charles tomorrow.