This is the horrifying moment a school bus packed with 50 children burst into flames as children as young as nine screamed and shouted to get off.

The driver had no idea the underside of the single-decker bus was up in flames until motorists flashed their lights to alert him.

The footage shows students running off a bus in Dorchester, Dorset and running for shelter in case the vehicle exploded.

One person was seen using a fire extinguisher in an attempt to put the blaze out before firefighters arrived 10 minutes later. 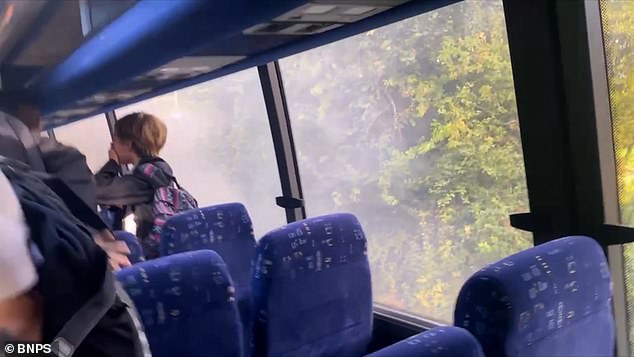 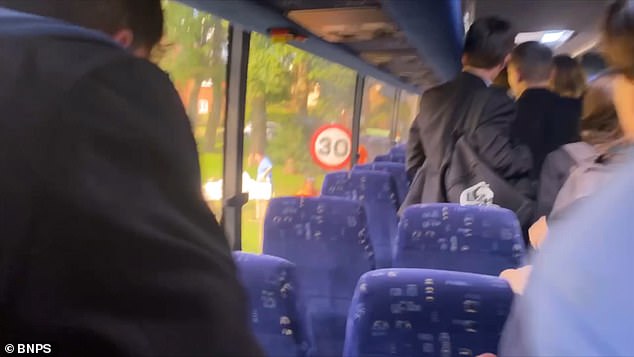 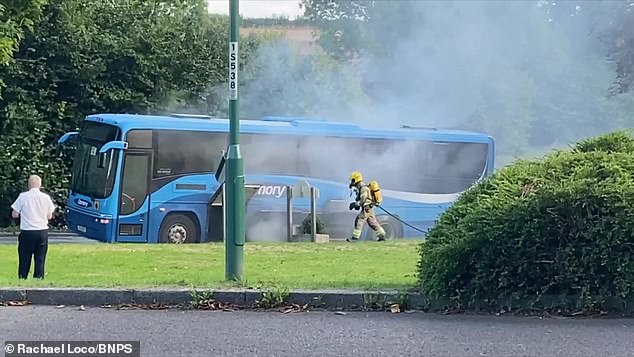 Fire crews tackling the blaze on the bus. It stopped at Charlton Down near Dorchester and the fire service was on the scene within ten minutes

The bus, operated by Damory Coaches, was taking children home from the Thomas Hardye School and Dorchester Middle School when the fire broke out.

All of the students safely evacuated the bus with help from members of the public.

It stopped at Charlton Down near Dorchester and the fire service was on the scene within ten minutes.

Parents spoke of their outrage amid claims the same vehicle had broken down just days ago and had been spotted ‘smoking’.

Parent of an eight-year-old boy on the bus Rachael Loco said: ‘My son was sat at the back of the bus and it was his friend who started shouting that they needed to get off the bus.

‘They could see the smoke and once the other kids knew what was happening they all started screaming and shouting.

‘None of them knew how to use the back exit so they had to go out of the front where they could see the smoke and fire.

‘They said that drivers behind the bus had been flashing to get it to stop and locals were quick to help, one even ran over with a fire extinguisher. 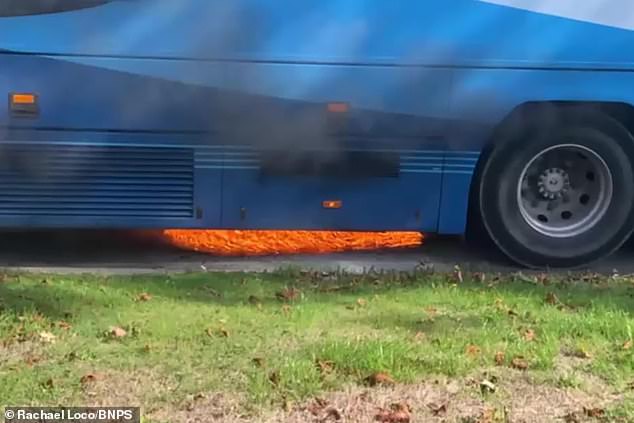 The underside of the bus in Dorchester, Dorset, was up in flames. Reports suggest the driver was unaware of the blaze until motorists flashed their lights to alert him 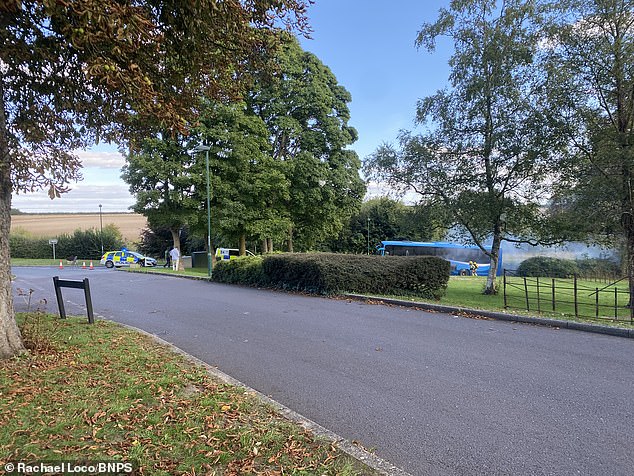 Emergency services including police and firefighters were at the scene. All 50 school children managed to escape the bus

‘My son said that the bus had been smoking a couple of days before when they got to school and the morning of the fire it broke down.

‘I just keep thinking what if it had blown up?

‘I picked up my neighbour’s children too and they were all traumatised afterwards and really jittery.

‘To say that I’m upset would be an understatement, I just keep thinking how different the outcome could have been.’

Another parent Laura Foot said: ‘When I got there loads of the children were in tears and they all looked shocked.

‘My daughter now doesn’t want to go back on the bus.

‘I want to know what evacuation protocols the drivers and children are taught as my daughter was petrified stuck at the back of the bus, not knowing how to get off.’

Damory Coaches general manager Alex Chutter said: ‘I can confirm there was a fire on one of our coaches, transporting pupils from Thomas Hardye School and Dorchester Middle School. Nobody on board was injured.

‘The safety of our drivers and passengers is our first priority, and we are carrying out an immediate investigation to establish the circumstances behind this incident.

‘We arranged a replacement coach to transport those on-board to their onward destination and apologise for any inconvenience caused.’

The Dorset & Wiltshire Fire and Rescue Service said that two crews were called at 4pm yesterday (Thurs) and the bus had a fire in its engine compartment.