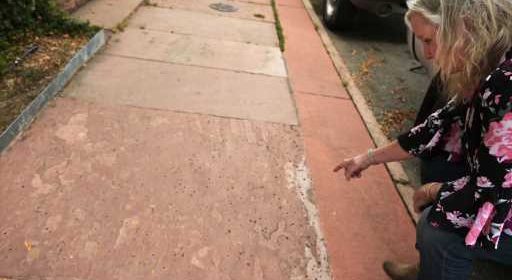 That’s hard to say in a more than 160-year-old city with 78 recognized statistical neighborhoods, many with unique quirks that go beyond a standard street grid.

The backers of the Denver Deserves Sidewalks initiative, a measure headed to city voters in November that would charge property owners annual fees to fund a widescale sidewalk installation, replacement and repair program, have their definition of “typical.”

If adopted, the fee program — in essence, a property tax — would replace the city’s much-maligned current approach where each property owner is solely responsible for paying for any work that must be done on sidewalks that run along their property lines. The measure will be labeled Initiated Ordinance 307 when ballots are mailed out next month.

A typical single-family home lot in Denver has 50 linear feet of sidewalk running alongside it, says Jill Locantore. Locantore heads the Denver Streets Partnership, the organization leading the sidewalk measure campaign with backing from other groups including the Downtown Denver Partnership, Bicycle Colorado and consumer advocacy organization, the Colorado Public Interest Research Group.

That linear feet measurement is key. As outlined in the ordinance language available on the city’s election division website, the fees property owners would pay would be charged by the foot on an annual basis, the total charges varying by street type.

“That actually comes from the city, believe it or not,” Locantore said of the 50 feet estimation. “The city has been talking about a potential sidewalk fee for 20 years.”

Locantore referenced a document from 2002 in which city public works officials discussed the potential for a fee — $1 per linear foot at that time — for a sidewalk program in residential areas. That report, referenced and built upon in a 2015 update, estimated average residential property lot lengths at 60 feet with the range running from 25 to 100 feet. The 2015 update upped the cost per foot to $1.25 per foot, adding up to $75 per year for what was then a “typical” 60-foot lot. The city did not follow through and now multi-modal transportation and environmental advocates like Locantore are tired of waiting.

“Lot sizes in Denver, along with cities across the country have been decreasing over the years, so we scaled back the 60 feet ‘typical’ example from 2002 to 50 feet,” Locantore said of her campaign’s baseline number.

There are plenty of atypical properties around the city and people who are either opposed to or skeptical of the sidewalk measure are pointing to inequities they say the measure will create even neighbor to neighbor.

District 2 Denver City Councilman Kevin Flynn did the calculations for his home in the far southwest corner of the city. Living on a cul-de-sac, he is one of the lucky ones. His house has about 35 linear feet of sidewalk so his annual fee would be below $75 a year. He is not even sure if he would have to pay. In some parts of his district, sidewalks are part of the wastewater system and should be covered by existing fees, he said.

There are many other homeowners in his district and elsewhere in the city who would not be so lucky, particularly corner lots and those homes that fall on a “peninsula” where their back fence also skirts a street, giving them sidewalk obligations on three sides, Flynn said.

Calculating fees for a handful of these outliers with the help of Denver’s platting and street classification maps, Flynn found some homes that could face annual fees over $1,000 and commercial properties that could be paying much more than that.

He also found neighboring homes in his district where one property owner could be paying $450 more per year than the people next door because their corner lot runs along an arterial street for which the per-foot fee would be $3.58.

The best way for a homeowner to figure out their costs ahead of voting on the measure is to determine how much sidewalk they are responsible for, what type of street or streets that sidewalk runs along and then do the math based on the initiative’s street type fee chart.

“I intentionally looked around to see what the more serious impacts would be because if it was just $100 a year for everybody that’s one thing,” Flynn said. “There are some inequities I wish had been addressed before the ballot language was solidified.”

Concerns Flynn has includes neighborhoods intentionally designed without sidewalks, like the Lakeridge enclave in his district.

The initiative has a carveout for people living in neighborhoods the city’s research has deemed vulnerable to gentrification, including East Colfax, Elyria-Swansea, Montbello and Westwood. Homeowners there would get a 20% discount.

But Flynn feels other neighborhoods, like Harvey Park and College View in his district, have many low-income families that are ill-equipped to handle the new fees and they would not be eligible for the discounts. Meanwhile, people living in lofts in multi-family buildings downtown would pay minimal fees despite living in neighborhoods with the widest and most heavily trafficked sidewalks.

Speer neighborhood resident Peggy Sue Andre falls into a category that she and Flynn find particularly unfair. Andre’s property was one of roughly 1,100 that the city sent an inspector to during a slow-moving sidewalk assessment program that ran from 2018 until 2020 before work was interrupted by the pandemic.

Andre was ordered by the city to repair the 120-year-old sidewalk in front of her home. She did that — with the help of a city-approved contractor and some recycled flagstone slabs — at a cost of $800, she estimated.  Andre invested in an industrial-grade, rubber sealant to lock out moisture and ants. She thinks her sidewalk is in good shape to last another 100 years.

She does not feel like she should be on the hook for an annual sidewalk fee.

“One, I disagree with this tax period,” Andre said. “Second, those of us who have repaired our walks should be exempt. There should be language in the statute. This would be, in essence, double taxation.”

Locantore counters the equity arguments with this: the system the city has in place now is fundamentally unfair. City citations and demands for people to pay for their own sidewalk repairs and replacements pop up capriciously and when they do the costs can be painfully high.

“Every sidewalk is going to need repair again at some point, even if it was replaced yesterday,” she said. “This fee will pay for those repairs and it will never be the property owner’s responsibility again.”

Locantore noted that commercial property owners will also be paying fees, oftentimes much higher than residential fees because of property sizes and street types. She expects the city’s renters to also contribute via their landlords passing the new costs to them in higher rents.

As for the issue of households in more suburban-style, spread-out neighborhoods paying more than condo buildings downtown, that is a function of urban design, Locantore said.

“It’s just inherently more expensive to provide infrastructure to lower-density, single-family homes because you just have fewer people to share the cost,” she said. “It is fiscally responsible for cities to encourage density so we can provide infrastructure in a sustainable, affordable way and this fee is structured to reflect that fundamental reality.”

The initiative has one wrinkle that could be utilized by people like Andre. Homeowners can defer their payments until the sale of their home, Locantore said. It could turn into a hefty sum that would become a point of negotiation at the closing table but it would allow people who just shelled out for a sidewalk or plan to move in the near future to avoid the annual fee.

The city’s Department of Transportation and Infrastructure estimates there are 300 miles of missing sidewalks in Denver, spokeswoman Nancy Kuhn. In a network with 2,300 miles of existing sidewalks, that’s more than 11% that don’t exist.

Beyond the places where the sidewalk ends, there are 830 miles of walks that the city deems “narrow,” Kuhn said. That could make them inaccessible for parents pushing strollers, people using wheelchairs and others.

The city can’t say just how many combined miles of sidewalks are damaged or in disrepair.

“We’re doing a high-level assessment now to gain a better understanding of that,” Kuhn said. “We do not have the results yet to share.”

Under the current system — homeowners paying for everything — 50 feet worth of sidewalk in a residential neighborhood comes with a hefty bill.

“That’s just for sidewalk. Not any curb or gutter or anything like that,” said Gubser, project manager for Parker-based contractor The Concrete Company. “Plus permits and permits are running a couple of hundred bucks easy.”

The Concrete Company is also on the city’s list of approved sidewalk repair and replacement contractors. Its crew can knock out a 50-foot job in a day, Gubser said. He noted that they come across properties in Denver where the sidewalk is basically gravel.

Being a small business, the Concrete Company does not have payment plans. The cost of the project has to be paid upfront so the company can pay for labor and materials, Gubser said.

Knowing the costs, Gubser is skeptical of a citywide sidewalk program funded through annual fees.

“How much taxes are they going to hit people for and for how long?” he said. “Is it just a new tax forever on top of their property tax? That gets old too.”