An independent panel has recommended the Melbourne Press Club reinstate an award given to journalist Sam McClure for his reporting on a controversial AFL training camp, arguing that the decision to strip him of the honour was flawed.

The report and its recommendation to reinstate McClure’s award will be presented to the Melbourne Press Club board for consideration on Wednesday. 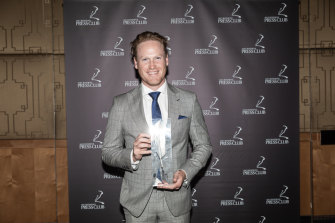 McClure, a sports and investigative journalist at The Age, was in February stripped of a Quill award he won in 2020 for his story on the Adelaide Crows’ 2018 pre-season AFL training camp.

The move by the press club board followed a legal settlement between The Age and camp organisers in which the masthead agreed to publish an apology acknowledging the venture was run in good faith. The Age apologised if the reporting had caused organisers hurt and offence and removed the article from its website.

The decision to revoke an award is highly unusual, and it was believed to be the first time in two decades that a Quill had been repealed.

Following the decision, The Age complained about a lack of process in the board’s deliberations, including the fact it had not been informed of the review or given an opportunity to respond before the board’s decision. McClure was also not asked for his side of the story during the board’s process.

Following an extraordinary general meeting on February 15, the board announced it would review the decision to annul the award following feedback from members and key stakeholders and would appoint an independent panel to oversee the process.

The panel, chaired by Matthew Collins, AM QC, found McClure and The Age should have been given the chance to plead their case, and the decision should have been delayed until more board members could be present to discuss the matter.

However, it found board members were entitled to stay for the vote even if they had a perceived conflict of interest because the media industry was small and many journalists had a personal or working relationship with one another, a source familiar with the review told The Age.

Press club sources said five board members including MPC president and Age journalist Nick McKenzie were absent and two further members recused themselves due to conflicts of interest when the annulment decision was made.

The demand that the board review the award was made by board member Tom Salom, editorial business manager at News Corp Australia, publisher of the Herald Sun, who did not recuse himself from deliberations.

After McClure was stripped of the award, it was given to the runner-up – Herald Sun reporter Michael Warner.

The review found the decision to annul the award was based on the assumption the article was unavailable, the masthead had conceded serious errors were made, and McClure had apologised, which was incorrect. It determined this could have been avoided if McClure and The Age had been afforded natural justice.

The board will need to decide whether Warner retains his award and whether the pair should be listed as joint winners.

Age editor Gay Alcorn welcomed the panel’s recommendation and its criticism of the board’s decision to provide a fair process in reviewing the award.

“The rescinding of McClure’s award was a terrible decision made in haste,” Alcorn said.

“We would hope the board accepts the panel’s recommendations without delay, and we expect the full report to be publicly released.”

With Tammy Mills and Roy Ward