A former aide for Margaret Thatcher has called the New York Times a ‘left-wing propaganda machine’ for using a former Russia Today star in an ‘opinion’ video on Liz Truss’ appointment as the British Prime Minister and what it means.

The video from fictional broadcast journalist Jonathan Pie, formerly of the Kremlin-backed TV network, claims conservatives have destroyed everything in Britain, including the weather, and mocks Truss as the next leader.

‘Unfortunately, Boris’ main achievement in office was to set the bar so low that anyone can now become Prime Minister – even Liz Truss,’ Pie says during the clip published in the Opinion section of the website.

It is one of the many videos the Times has run in the last six months of Pie ranting about Boris Johnson and blaming conservatives for the issues facing Britain.

‘It’s the kind of video of Kremlin would put out about Britain,’ he added. ‘It’s a deeply unpleasant propaganda video and bears no relation to reality.

‘This video is full of outright lies combined with some real nastiness and unpleasantness. It’s a hatchet job video basically that paints a completely false picture of the United Kingdom.’

Gardiner said the video is full of ‘deep-seated unpleasantness’ about Truss and a direct attack on Margaret Thatcher. Pie says the Iron Lady ‘hated’ the working class, a claim Gardiner calls ‘complete nonsense’. 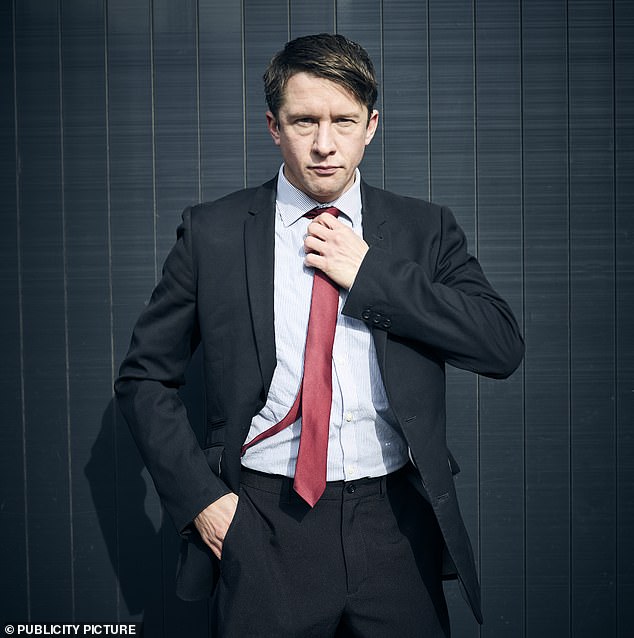 ‘The New York Times is a newspaper in steep decline and it’s become a left-wing propaganda vehicle,’ Gardiner told DailyMail.com.

English actor and comedian Tom Walker created the character Pie to be a satirical version of a journalist. He was hired by the Gray Lady for a video under their ‘opinion’ banner to ridicule conservatives and the replacement for Boris Johnson.

The Times has been widely criticized for running the video – and not just by Gardiner.

Sunday Times correspondent Josh Glancy referenced Pie saying you ‘can’t get in or out of the country because of airline staff shortages and queues at the border’, and wrote on Twitter: ‘This is categorically untrue. Does fact-checking not apply @nytopinion when it’s a banterous British comedian being snide about the UK? 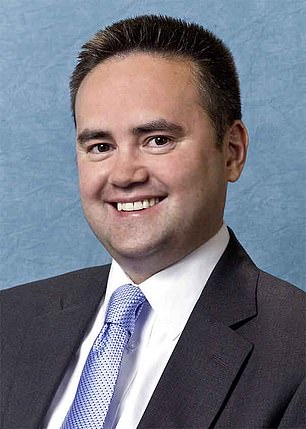 ‘Trying to imagine @thetimes comment pages publishing videos of a third rate US comedian doing a skit about January 6 and the erosion of American democracy.

‘Britain is in a rough spot and British newspaper standards often fall short of US standards. But publishing this kind of garbage is just inexcusable for the NYT, the world’s most influential and self-serious newspaper.’

‘Delicious though harmful,’ wrote Katrina vanden Heuvel, editor and publisher of the progressive magazine The Nation.

Walker, as his Pie character, starts off the video by joking that he won’t say ‘gas prices’ for the American media outlet because it is ‘petrol’ and it’s a ‘liquid’.

Pie is then asked about the state of the nation in Britain. He says: ‘Well I mean it’s just s***. Everything is s***.’

A columnist for Britain’s The Times Iain Martin tweeted of the media: ‘World’s worst newspaper.’

Pie goes on to say in the satirical comedy video how prices are rising so high in the United Kingdom that families are struggling to afford to eat.

‘Our trains aren’t running, our airports are a nightmare, you can’t get out of our country because of staff shortages and queues at border patrol,’ he said in the straight-to-camera shot with some cut aways to real footage.

‘Our rubbish is piling up, our health system is on life support, even the bloody weather doesn’t work.’

Specifically he slammed Johnson for remaining in power until a successor was chosen just to still take a summer vacation – and then making ‘front-page news just for showing up to work.’

Some criticized the work from The New York Times as being indiscernible from Russian propaganda.

One Twitter user wrote: ‘Thought this was enemy propaganda for a minute. We’re having a poor crop of politicians, just like the US. We’re not remotely falling apart at the seams.’

‘For god’s sake, NYT,’ wrote freelance journalist Andrew Connelly. ‘You could go to literally any pub and get infinitely better, more entertaining and accurate analysis of the UK than this mirthless, lazy, ex-Russian state media schtick.’ 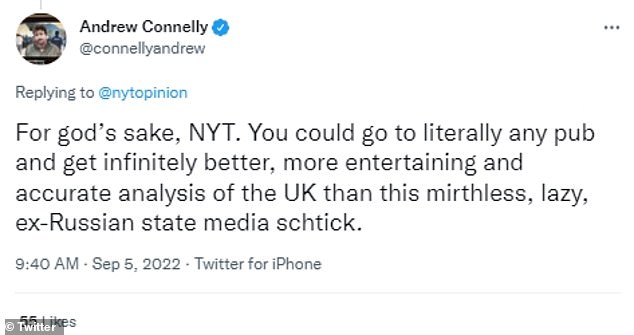 Another user said the Times should change their name to Russia Today.

‘Your hatred of the UK is so irrational you’ll hire an ex propagandist for Russia Today to besmirch this country,’ one Twitter user wrote.

Walker previously has done work for Russia Today, now more commonly referred to as RT – but he insists he has cut all ties with the controversial network.

RT is a state-operated Russian television network funded by Moscow. It operates on free-to-air channels to audiences outside Russia in multiple languages, including English, Spanish and Arabic.

From his Johnathan Pie account on Twitter, Walker defended himself from a 2016 criticism that he’s a Putin shill.

‘I never worked for RT,’ he insisted, ‘they used to license my content which they never censored but I no longer have any ties with RT. ok?’

Other users said the New York Times is above Pie’s comedic work.

‘In this cost of living crisis it’s good of you to give us a quick fire way to cut bills by cancelling my NYT subscription,’ journalist Benjamin Butterworth tweeted.