Lukashenko humiliated as Belarusian student displays ‘save me’ sign

Belarusian President Lukashenko was left humiliated by a student after he raised a “save me” sign while the leader was holding a propaganda speech that lasted over four hours. Following the move, other students in the auditorium are seen giggling as the sign appears on the screen right behind the Belarusian President.

In the video, the Belarusian student is seen raising the sign while another student was answering some questions coming from the leader.

While the second student was on camera and displayed on the screen behind the leader, the brave youngster is seen turning towards the camera and showing his “save me” sign.

Once shown, the student turned back towards his initial position.

The sign is seen appearing on the screen right behind Belarus President Alexander Lukashenko. 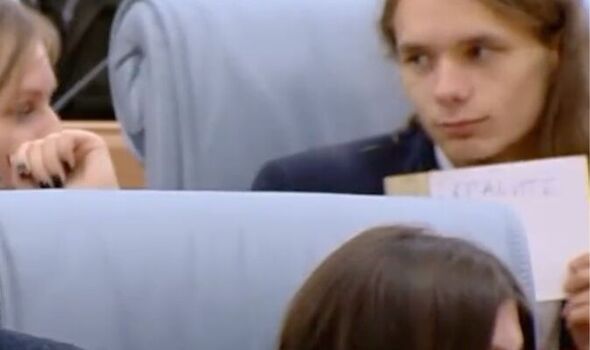 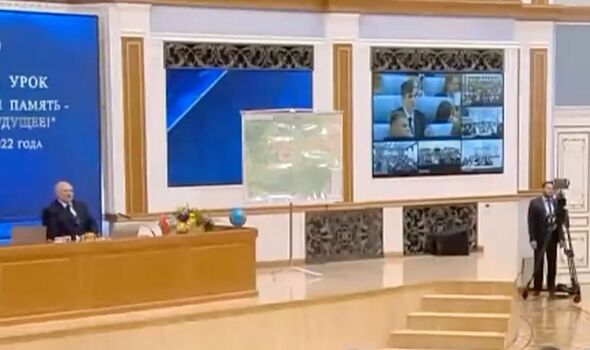 The move happened in the middle of the speech held by the Belarusian leader at the beginning of the student’s academic year, which lasted over four hours.

Belarusian politician and journalist Franak Viačorka shared the video and commented: “Lukashenka addressed young Belarusians on the occasion of September 1, the beginning of the school year.

“His speech lasted 4 hours — a bunch of miserable propaganda cliches. Youngsters in the auditorium were fed up. A guy showed a “Save me” sign during the live stream”.

In another clip, which showed another student answering questions from the leader, Mr Viačorka wrote: “This Lukashenka’s lecture showed that despite all attempts to brainwash the youth, it didn’t work.

“These students were born & raised during his rule. And they are laughing at the old mad dictator. The spirit of 2020 is still there, waiting for the moment to surface again”.

Mr Viačorka also shared footage that captured the moment a school girl was detailed after she showed a peace sign at the September 1 celebration in Novapolatsk, Belarus.

He commented: “A school girl was detained for showing a peace sign at the Sept.1 celebration in Novapolatsk, Belarus. Military men were performing a fight, & a brave girl came out of the crowd with her hands raised, gesturing [peace sign]. She was immediately detained. The crowd applauded her courage”. 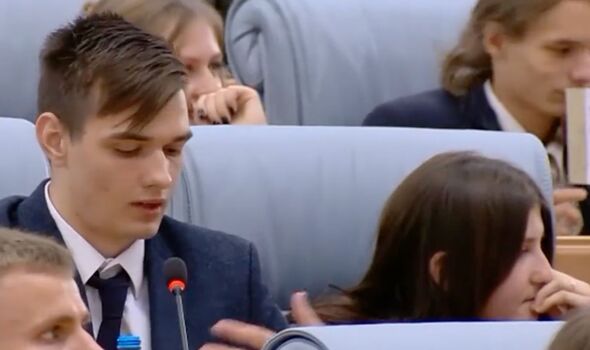 Speaking in a national address, he explained that the military drills could be aimed at Ukraine.

He said: “This particular exercise will for the first time cover liberating territory captured by the enemy, and reaching the border in a counter-offensive.

“It’s possible that by ‘lost territory’ they could mean Ukrainian borderlands in Volyn, Rivne, and Zhytomyr oblasts”.

Since the beginning of the war in Ukraine, Belarus’s President Lukashenko has emerged as one of Putin’s greatest allies.

Despite not getting directly involved in the war, in the weeks before the invasion over 30,000 Russian soldiers were sent to Belarus, the same which blitzed straight into Kyiv right at the beginning of the war in February.

READ NEXT:
Boris outrage at comments about buying a kettle – here’s what he said
Liz Truss urged to declare energy independence
Homeowner left in tears after ‘men broke into house to install meter’
Migrants deported days after arriving in the UK
‘Festival of Brexit’ FARCE: £120m project falls flat