The White House promises a big celebration today for the signature accomplishment of President Biden’s term — the so-called Inflation Reduction Act. Thousands are expected to watch as Biden touts the law as one of the most consequential pieces of legislation in American history, according to a White House official.

But a question overhanging Tuesday’s party is how voters will think about the law as they go to the polls in November’s midterm elections in the weeks and months ahead.

Pollsters are just beginning to answer that question, and perceptions of the law faced perhaps another hurdle Tuesday with new data showing inflation softening but nonetheless coming in worse than expected. The August Consumer Price Index report showed an 8.3% increase over last year after economists had expected prices to rise just 8.1%.

The sprawling bill will devote hundreds of billions of dollars over the coming decade towards the fight against climate change, reducing the cost of prescription drugs, and cutting the deficit. It will also alter the U.S. tax code’s treatment of big corporations.

Yahoo Finance analyzed the consumer sentiment in recent weeks and found that while a majority of Americans don’t buy Democratic claims that the bill will indeed reduce inflation, they nonetheless appear to like much of the bill anyway.

Here are some of the major takeaways from pollsters’ findings.

On one front, voters agree with many experts that perhaps the bill is misnamed.

Both the Penn Wharton Budget Model and the Congressional Budget Office analyzed the bill and predict little to no impact on inflation. Other findings suggest it will only modestly help the fight against inflation.

And voters so far agree. A recent survey from Morning Consult/Politico found that only about 1 in 4 voters believe the bill will reduce inflation. A larger number of voters (34%) think it will make inflation worse.

The split is common in the polling. An Emerson College poll from Aug. 26 found that 34% of respondents believe the law will reduce inflation, with 32% saying it will increase it.

Another poll, from CBS News conducted Aug. 24-26, found 37% of respondents predicting the law would help inflation while 39% think it will hurt. Twenty-four percent predict “not much effect.”

The CBS poll also found that people are paying attention with a sizable majority (71%) reporting that they had heard “a lot” or “some” about the new law.

…But they like most of the provisions in it

According to the White House, today’s event will include lawmakers, governors, climate leaders, health care activists, and more.

They are clearly showing up to support the aspects of the law that affect them. The good news for the White House is that Americans also support most of the law’s goals. 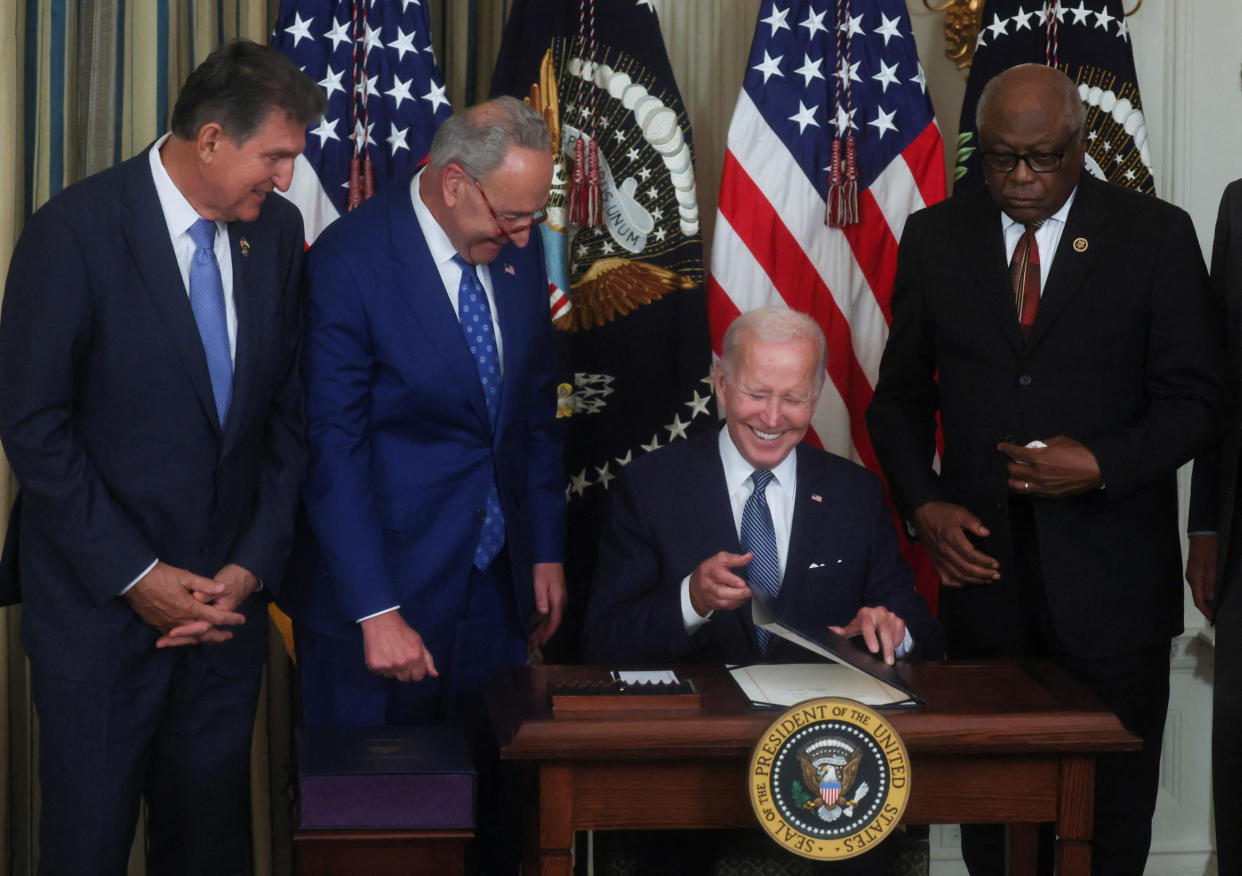 The Morning Consult/Politico survey found similar results with support for wide swaths of the bill but a key exception again being the $80 billion set aside to increase IRS enforcement. Only 40% of respondents supported the idea, which experts say will chase down tax cheats and bring in $180 billion over the coming decade.

Even a presentation from Navigator Research, a progressive-leaning polling operation, found similar issues at the top of and bottom of the preference list. Policies to rein in health costs and drug prices were widely popular while increased IRS enforcement was less so.

Republicans have homed in on the IRS provisions as a centerpiece of their ongoing opposition to the bill, which many GOP lawmakers say they want to repeal entirely.

An overall mood of growing optimism

Perhaps most consequentially for the White House, Americans feel more optimistic about the economy overall with Biden’s approval ratings on the economy rising alongside his overall scores.

But that appears driven less by the new law rather than other factors like easing gas prices.

The University of Michigan Consumer Sentiment Index, for example, recently reported August numbers that showed a 13% jump from July and optimism reporting a 59% jump when it comes to feelings about the economy in the year ahead.

An Investor’s Business Daily poll released this week also found a significant jump in Biden’s approval rating among young people, driven in part by some of the climate-focused provisions in the law. His recent decision to forgive up to $20,000 in college loans is another key factor in shoring up his support among young people. 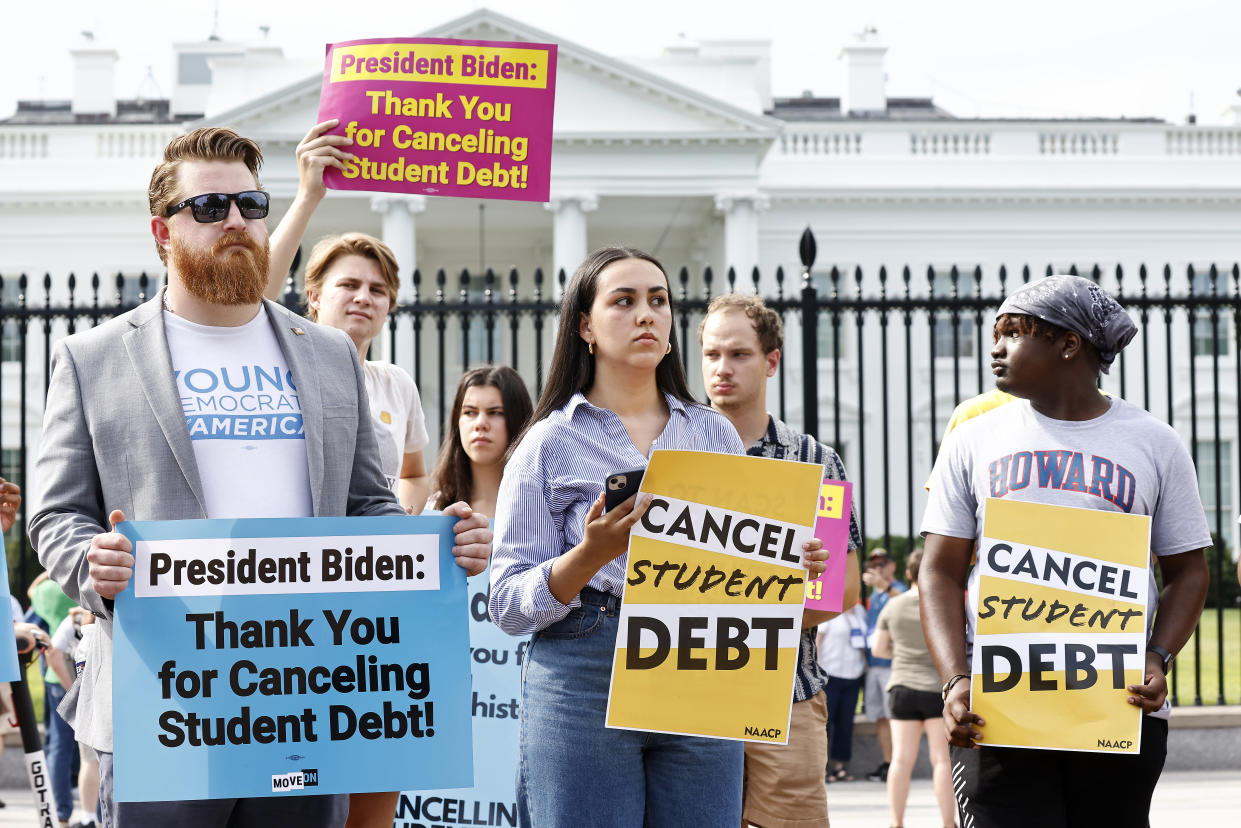 An Economist/YouGov poll released last week found Biden with an overall approval rating of 41% (versus 51% who disapprove). Those results largely tracked his approval rating on jobs and the economy. The poll found 42% approve of Biden’s handling of that issue with 48% disapproving.

But a notable finding was when pollsters asked: “​​Do you think the United States’ economy has been strengthened or weakened by Joe Biden’s decisions as president?” Only 34% of national adults responded that Biden had strengthened the economy, which is down from 49% in April 2021.

Ben Werschkul is a Washington correspondent for Yahoo Finance.