In Tulsa, a Burmese Cooking Tradition Takes the Spotlight

The food of the Zomi people of Myanmar isn’t easy to find in America, even in this city so welcoming to refugees. But this weekend it will move front and center.

Zomi cuisine will headline a conference this weekend in Tulsa, Okla., that celebrates the Zomi people, an ethnic minority from Myanmar and India. Credit…Shane Brown for The New York Times

TULSA, Okla. — The electrifying flavors of bawngsa kan — beef fried with generous amounts of tamarind, ginger and chiles — are easy to love. But finding the dish in an American restaurant is a challenge.

This is a food of the Zomi people, an ethnic minority group with roots primarily in Myanmar (formerly Burma) and India. Many are refugees who escaped authoritarian rule and persecution for their Christian faith in their home country.

Some 7,000 to 9,000 Zomi people live in Tulsa — the largest Zomi population in the United States, according to Hau Suan Khai, the chairman of Zomi Innkuan Oklahoma, a local community organization.

Yet even in the restaurants of Tulsa, it can take some detective work to track down Zomi dishes, which are often mere footnotes on the menus of Zomi-owned restaurants that specialize in other cuisines.

This weekend, though, Zomi food won’t be tucked away on a menu — it’ll be the headliner. A conference called Zomi Khawmpi, held every other year, is expected to draw 5,000 to 7,000 Zomi people from across the United States to the Mabee Center in Tulsa to play sports, compete in a pageant and eat their traditional foods. More than a dozen outdoor stalls will sell Zomi dishes to the public on Friday and Saturday.

Zomi food, with its hearty soups and ingredients like corn and potatoes, was born in the cool mountain climates of the Chin State in northwestern Myanmar and the Mizoram and Manipur states of northeastern India. Spices are used minimally. Tamarind, ginger and garlic are primary seasonings.

But for many Zomi people here, introducing other diners to their food is a secondary goal of the conference. As minorities both in Myanmar and the United States, they see the event as a means of ensuring the survival of their culture and cuisine.

Mr. Haunung, the owner of Asian Star, said he was proud of the conference’s emphasis on meetings to discuss how to help Zomi refugees. Tens of thousands of them still live in refugee camps in Malaysia, Thailand and India, where they often lack proper health care and education.

“It is important to show our next generation our traditional foods,” said Cing Sian Piang, 36, who will be selling mehkha kan, or bitter melon stir-fried with chiles. “That is the most important thing for me — just to not lose the identity.” 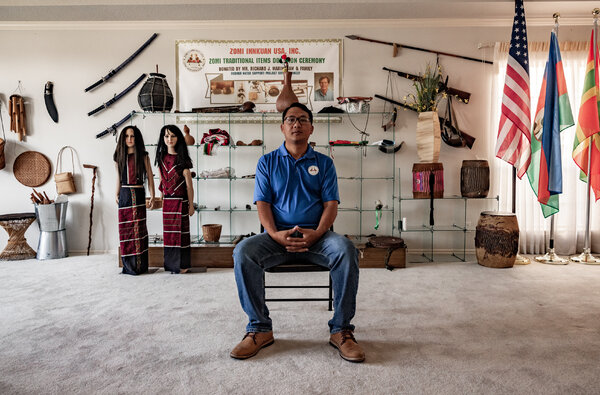 The conference comes at a time when Tulsa’s restaurant scene has grown increasingly diverse and gained national recognition. Five local chefs were nominated for James Beard Foundation awards this year.

The connection between the Zomi people and Tulsa began with religion.  The first arrivals came in the 1970s to study at Oral Roberts University, an interdenominational Christian school. In the years following, the military-controlled government in Myanmar, where the majority of people are Buddhist, forced Zomi people into labor and looted their homes and churches. Oklahoma, with its large Christian population, became a safe haven. The number of Zomi people in Tulsa grew rapidly throughout the 1990s and early 2000s, many of them resettled by Roman Catholic charities.

In 2017, Mayor G.T. Bynum introduced the New Tulsans Initiative, which connects Tulsa’s 45,000 immigrants with education, employment and financial resources. “Oklahoma is far-right in so many aspects,” he said in a recent interview, but Tulsans are generally supportive of immigration. Mr. Bynum attributed this to the city’s Christian missionary spirit, and its founders, the Muscogee Nation. “We were actually founded by refugees,” he said, adding that the people of that nation “were driven out of their homeland on the Trail of Tears.”

The Zomi Khawmpi conference began in 2010 as a way for Zomi people in different parts of the country to meet one another. This week’s will be the first in four years — the 2020 conference was canceled because of the pandemic — so organizers expect their largest crowd yet.

Food is a major point of pride for Zomi people, a means of showing the multitude of cultures within a small country like Myanmar, said Tual Khan Suan, the board chairman of Zomi Innkuan USA, the national group organizing the conference. “It identifies our people as different from the Burmese people,” he said.

Many Zomi people cook traditional food at home. Yet Zomi restaurateurs can be reluctant to serve it because the cuisine is still unfamiliar to many Americans.

The conference, then, presents a rare opportunity for Zomi people to share their food, free of inhibitions, said Cing Lian Vung, 38, a food vendor. “The shop owners know if they don’t mix Zomi dishes with other cuisines like Chinese or Korean or sushi,” they won’t sell well, she said.

At the conference, she can cook the way she does at home. “We have a right to show our identity and our culture, including the food,” she said.

Nuami Lam Tung, 20, a student at Oral Roberts University who will attend the conference, said she hoped to find sabuti, a corn and beef porridge that her mother often makes in the winter. “If we were in Myanmar,” she said, “we wouldn’t be this passionate.”

That passion isn’t shared by everyone.

“Zomi food, it is not luxury food,” said Samuel Lian, 28, a children’s pastor who came to the United States as a teenager. The ingredients are limited, he said. The seasonings are simple.

“Many people, like the younger generations, prefer other types of food. I mean, I rarely eat the gatam,” preserved white beans, “or the corn soup, which is a very big part of the culture.”

Another local pastor, Dam Suan Mung, 65, believes Zomi cooking doesn’t need to be preserved. “If there is a choice of better food, why not choose that one?” he said. “Why should we stay with our Zomi food?”

Food, after all, is only one facet of a culture. At Kai, the co-owner Vung Cing displays a framed picture of a hornbill, the national emblem of the Zomi people. Photographs of Myanmar and the red, yellow and green Zomi flag decorate the walls of Zogam Cafe. A cultural center, Zomi Innpi, opened in Tulsa four years ago, exhibiting traditional artifacts like musical instruments and clothing. And Tulsa’s Jenks public school district stocks Zomi-language books in its libraries.

But Ms. Piang, a food vendor at this weekend’s event, has no plans to give up on her people’s culinary traditions.

One day, she explained, she’ll be too old to prepare meals for herself. Her daughter may not know how to cook. And she’ll have to find somewhere to eat vaimim cim.