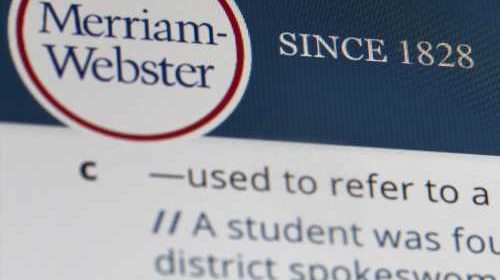 Finding out that shrinkflation, adorkable, subvariant and even pumpkin spice are now officially in the dictionary might make you exclaim “Yeet!”

ICYMI, those are five of the 370 words and phrases that Merriam-Webster added to its dictionary this month, the publisher announced Wednesday. Oh yeah, ICYMI, short for “in case you missed it,” was also added.

“Some of these words will amuse or inspire, others may provoke debate. Our job is to capture the language as it is used,” Peter Sokolowski, Merriam-Webster’s editor at large, said in a statement. “Words offer a window into our ever-changing language and culture, and are only added to the dictionary when there is clear and sustained evidence of use.”

Worldwide inflation has made shrinkflation a household word. It is defined by the Springfield, Massachusetts publisher as “the practice of reducing a product’s amount or volume per unit while continuing to offer it at the same price.” Think, going to the grocery store and finding that orange juice is no longer available in 64 fluid ounce (1.9 liter) cartons, just 59 ounce.

Pumpkin spice — that polarizing blend of cinnamon, nutmeg, ginger, cloves and allspice that’s used to flavor, well, just about everything every fall these days — has been around for years but is finally in the dictionary.

Many of the words are slang or used informally on social media. Adorkable, a mashup of dorky and adorable, means “socially awkward or quirky in a way that is endearing.” Yeet is either “used to express surprise, approval, or excited enthusiasm” or as a verb to mean “to throw especially with force and without regard for the thing being thrown,” according to Merriam-Webster’s definition.

The worldwide coronavirus pandemic has pushed terms once heard almost exclusively in medical circles onto everyone’s tongue, including subvariant, booster dose, and emergency use authorization, which are all new dictionary entries.

Many new words are drawn from popular culture, including the verb MacGyver, inspired by the television character who can make or repair just about anything with ordinary items within reach.

If all the new words are overwhelming, try listening to the calming dawn chorus, defined as: “the singing of wild birds that closely precedes and follows sunrise especially in spring and summer.”