A former senior National Australia Bank staffer has told a court she took $80,000 in cash on a flight from Sydney to Melbourne after receiving the money from a businesswoman accused of defrauding the bank of millions.

Rosemary Rogers, a former chief of staff to the bank’s chief executives, has told the NSW District Court trial of Sydney businesswoman Helen Rosamond that she approved inflated invoices from Rosamond’s company Human Group to NAB as part of a fraudulent scheme. 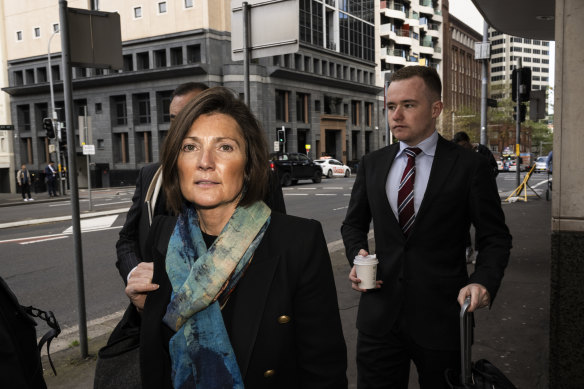 Helen Rosamond outside the NSW District Court this week.Credit:Louise Kennerley

The court has heard allegations the invoices covered Rosamond’s personal expenses, including $228,747 for an interior designer to furnish her Potts Point home, as well as gifts for Rogers.

Rogers, who was chief of staff to NAB chief executives between 2009 and 2017, has said she received a house deposit, a BMW, a boat and luxury holidays, among other gifts, and she understood NAB ultimately picked up the tab for those expenses.

She gave evidence on Wednesday that she told Rosamond at one stage that she was having “cash flow issues” and the businesswoman subsequently handed over a sum of cash in an envelope. 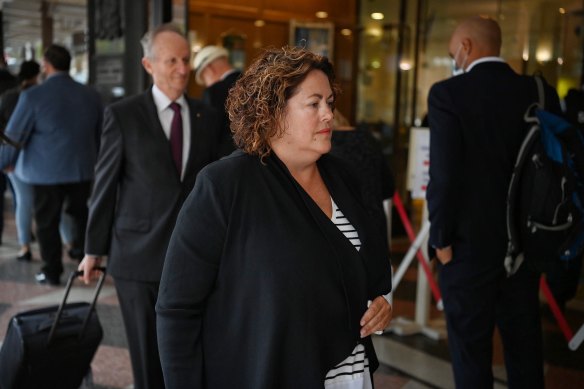 The court heard on Friday the alleged sum of cash was about $80,000. Rosamond’s barrister, Dr Anton Hughes, put it to Rogers that “Ms Rosamond did not give you cash in an envelope at any time. Do you agree or disagree?”

Rogers said she believed the money, in “fifties and hundreds”, was handed over in an A4 envelope at a lunch with Rosamond in Sydney before Rogers flew home to Melbourne.

She told the court she took the money home in carry-on luggage, including through airport security scanners.

“You weren’t concerned that taking a large amount of cash through the security scanners might bring you to someone’s attention?” Hughes asked.

“I didn’t really think about it, and I had a fair bit of alcohol over that lunch,” Rogers replied.

“I don’t recall how big it was … I can’t remember it being that large,” Rogers said. She told Hughes she “couldn’t tell you exactly” how many notes must have been in the package.

Rogers agreed that she had told investigators in December 2017 that she didn’t know anything about cash payments, but she told the court she “wasn’t truthful” at that time. She rejected a suggestion from Hughes that she had in fact told the truth in 2017.

Rosamond, 47, is standing trial on charges relating to her alleged role in defrauding NAB of $15 million. She has pleaded not guilty to 60 counts of giving a corrupt benefit and 32 counts of dishonestly obtaining, or attempting to dishonestly obtain, a financial advantage by deception.

The jury has previously heard Rogers received a prison sentence in 2020 after pleading guilty to 27 counts of corruptly receiving a benefit and five of obtaining a financial advantage by deception.

Rogers received a discounted sentence in light of her early guilty plea and her agreement to give evidence.

The court has previously heard Rosamond’s event management Human Group organised retreats for the bank’s executive leadership team among other events. Rogers was authorised to approve payments of up to $20 million.

During cross-examination on Friday, Hughes put it to Rogers that she had told Rosamond on a number of occasions that NAB had approved specific expenses, including a Bayliner boat and a BMW for Rogers.

Asked if she recalled telling Rosamond in February 2014 that then-chief executive Cameron Clyne had approved the boat purchase “as part of his retirement plan and CEO transition”, Rogers said no.

She also said she did not recall telling Rosamond in October that year that the BMW had been approved as a company expense and that she had been told “it’s best to go through you [Rosamond], as by the time the NAB paperwork is completed … it would take ages”.

The trial continues on Tuesday.