‘I wish you were like Bluey’s dad. He’s much funnier than you’

“I wish you were like Bluey’s dad. He’s much funnier than you.”

Oh, the brutality of your own daughter. The killing blow, delivered wide-eyed, direct to the vulnerable bits and only days before Father’s Day. If I’m not funny, am I even Dad? 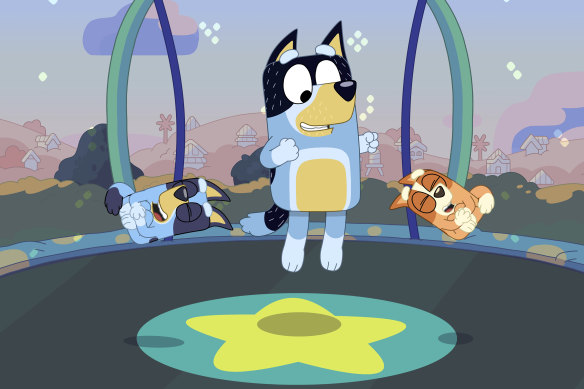 Bandit plays on the trampoline with Bluey and Bingo.

This is, to be honest, part of what I was looking forward to about fatherhood: the chance to trot out the world’s worst jokes, day after day. I had images of myself in the future, in New Balance sneakers, a T-shirt reading “I’m not a regular dad, I’m a cool dad” and unkempt hair, busting out pun after pun. Driving past a cemetery: See that, kids? Dead centre of town. Or: Did you hear about the new restaurant in space? Great food but no atmosphere. You feel like a sausage? You don’t look one.

Yes, I am Dad, destroyer of social occasions.

At a recent dinner with fellow school parents, I dared a dad joke in adult company. “When does a joke become a dad joke?” I asked, grinning in anticipation. “When it becomes apparent. Get it?”

One dad fixed me with unblinking eyes and said: “Please don’t do that.” Do what, I asked, mystified. “Make puns.” He had to be joking. Surely. Who could hate puns?

But no. It turns out his father was a monstrous maker of bad jokes. Day in, day out, they kept coming despite desperate pleas from his children and long-suffering partner. The dad joke hustle was real. Can’t stop, won’t stop.

Now, as an adult, my fellow dad was burnt out. There was no pleasure in dad jokes. No puns permitted. He was determined not to pass on that trauma.

I felt for him. What were his options? Proper adult talk with the kids, all the time? Impossible. You can’t survive that way.

During lockdown, I couldn’t bear to watch Bluey alongside the kids. The problem had a name: Bandit Heeler, the protagonist’s father. Yes, his jokes were superior – think of “The Claw” episode, where he quips: “Magic Claw has no children. His days are free and easy.”

But it was more than that. I was being out-parented by a cartoon dog. Bandit was everything I couldn’t live up to. Available. Mental space for play. Aware of his own shortcomings. Non-stressed. Even when he got things wrong, he found ways of making it better. Bandit’s an all-round good guy. So why did he rankle?

Then I realised. The makers of Bluey had a master plan: get the lead singer of cult ’90s band Custard to voice the dad, and use him to lead the dads of Australia out of the past and into an enlightened future of best-practice fatherhood. I don’t want to get conspiratorial, but Bluey is heavily laced with dad-improving messages. I had the distinct sense I was being trained. Led by the nose towards healthier dadhood. Shown better ways of expressing myself beyond jokes. Bandit was role-modelling. And by all the dad power invested in me, I hated it.

I found myself longing for the days of deadbeat cartoon dads. Homer Simpson set a low bar. The Family Guy dad? Pathetic. That useless dad in Rick and Morty? Pshaw. Puny. They weren’t trying to improve me. Their only lesson was that if you brought the gags, you could be an otherwise useless little appendage at the end of a family.

But if my jokes were flat, what was left? Did I even have a key point of parenting difference? Would my daughter, in years hence, tell her mates she had a good dad? The okay-est dad? Or some guy who just tied up her rollerskate laces and extracted her, bleary-eyed and reluctant, from bed to be pressed into yet another day of school – all while insisting on making jokes as his coping mechanism?

I guess I’ll find out in about 15 years. But until then, I’ll be judged by the calibre of my Father’s Day presents. If it’s socks and jocks, that means I was a generic dad who forgot to develop a personality. Airport novel: phoned-it-in-dad. “Kiss the cook” apron: pun punishment. Electric skateboard: she wants me dead.

But maybe I’ll be lucky. She might get me a joke book, annotated with savagely beautiful little notes like “try this one, Dad, it’s almost funny”. If I get that, I’ll know I did OK.

On that day, and not a day earlier, I’ll be able to stand up straight, shoulders back and look myself in the mirror. Yes, like Jordan Peterson before the benzo addiction. Then I’ll allow myself a very brief nod of approval. Dad? Yes. At last, that’s me.

The Opinion newsletter is a weekly wrap of views that will challenge, champion and inform your own. Sign up here.