GDP grew just 0.1 per cent in October amid 'stagflation' fears

Economy was stalling even BEFORE the latest Covid crackdown as GDP grew just 0.1 per cent in October – fuelling ‘stagflation’ fears

Rishi Sunak warned of ‘bumps in the road’ today as grim figures showed the economy stalling even before the latest coronavirus crackdown.

GDP rose by just 0.1 per cent in October, lower than the 0.4 per cent analysts had expected. UK plc is still 0.5 per cent smaller than pre-pandemic levels.

The weak figures underline the pain being caused for business by global supply chain chaos that has been sending prices spiralling.

The measures imposed in a bid to control the Omicron variant are set to deal another blow to activity.

The Bank of England has warned that inflation could top 5 per cent early next year, more than double its target. However, the poor GDP performance could set back expectations of an interest rate rise. 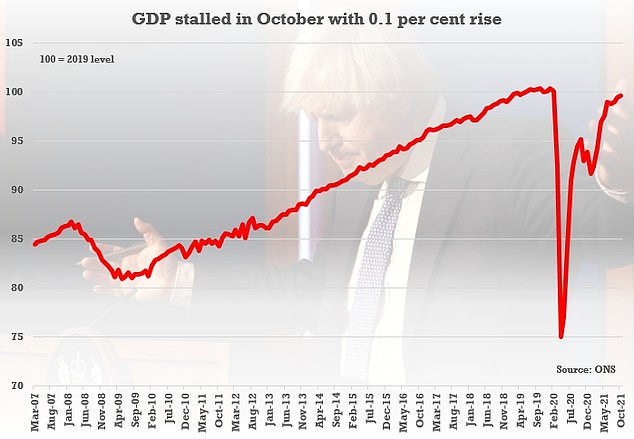 GDP rose by just 0.1 per cent in October, lower than analysts had expected. UK plc is still 0.5 per cent smaller than pre-pandemic levels

‘Taken as a whole, the dominant services sector reached its pre-pandemic level for the first time in twenty months.

‘These gains were offset by a drop in restaurants, which fell back after a strong summer, and reduced oil extraction and gas use.

The ONS said growth slowed as the construction sector notched up its largest drop in business since April 2020.

Chancellor Rishi Sunak said: ‘We’ve always acknowledged there could be bumps on our road to recovery, but the early actions we have taken, our ongoing £400bn economic support package and our vaccine programme mean we are well placed to keep our economy on track.

‘We have still been recovering quicker than expected, with more employees on payrolls than ever before and redundancies remaining low.’ 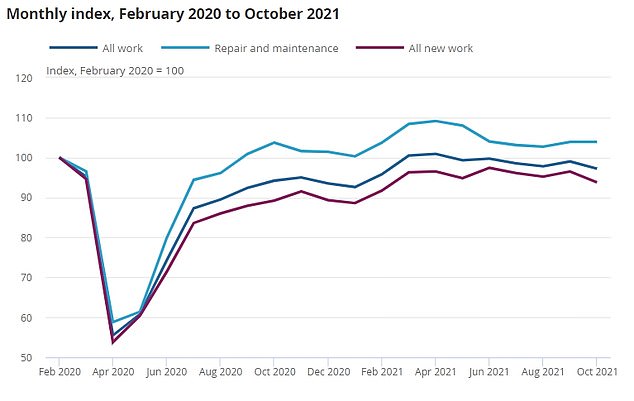