Kigali: Rwanda’s leading political opposition figure Victoire Ingabire says the Commonwealth has betrayed its own values, after she was blocked from attending the Heads of Government summit in Kigali, and President Paul Kagame used his platform as summit host to launch an attack on the world’s press for reporting her views.

Kagame, and the controversial head of the Commonwealth Secretariat, the Labour peer Baroness Patricia Scotland, who was narrowly reappointed, both launched tirades against the media when asked about their records by a BBC journalist during their end-of-summit news conference. 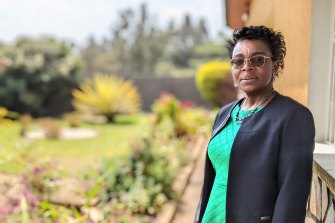 Rwanda’s leading opposition figure Victoire Ingabire at her home in Kigali, where she lives under surveillance.Credit:Latika Bourke

But Ingabire, who was jailed when she returned home from exile to contest the 2010 presidential elections against Kagame said human rights conditions in Rwanda had only worsened since it joined the Commonwealth in 2009.

“Some countries said we’ll help Rwanda to change, but 12 years later Rwanda did not change, Rwanda is not practising any core values of the Commonwealth and it hosted the CHOGM and has chair-in-office for the next years,” she said, speaking exclusively to The Sydney Morning Herald and The Age from her home in Kigali where she lives under a form of house arrest and constant government surveillance.

“Now I’m asking why this Commonwealth has these values if nobody has to practise them?

“These values have no meaning and my question is what benefit there is for normal citizens of countries who are members of the Commonwealth? Nothing, nothing,” she said.

Africa’s Court of Human and Peoples’ Rights found that Ingabire’s right to freedom of expression and right to defence had been violated and in 2018 ordered Rwanda to pay her tens of millions in Rwandan francs in reparations but Rwanda refuses to recognise the ruling.

Ingabire applied to attend CHOGM but was knocked back. Around 5000 people are estimated to have attended.

The Secretariat did not respond to requests for comment.

“What kind of organisation can do something like that? An organisation that talks about democracy, rule of law, freedom of speech but you cannot participate,” Ingabire said.

Ingabire was pardoned from her 15-year jail after eight years in 2018 but lives under constant government surveillance.

She says a climate of reporting neighbours exists throughout Rwanda and that one of the only people she trusts is a woman she met in prison who was jailed for having abortion.

“You cannot trust anyone.”

When this masthead visited her home, she pointed out at white car parked on top of one of Kigali’s famous hills overlooking her home from where she said she and her visitors were constantly monitored. 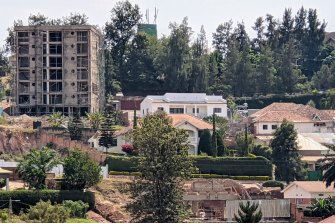 This white car is permanently parked on a hill overlooking the home of Rwanda’s leading opposition figure Victoire Ingabire in Kigali. Credit:Latika Bourke

Despite being pardoned she has been denied permission to leave the country several times and has not seen her sick husband in the Netherlands or her son since she returned home 12 years ago.

Four of her associates have been assassinated and four more disappeared. State-sponsored disappearances are a trademark of Kagame’s regime and had previously come under criticism by the Australian government, United Nations and a string of human rights organisations.

“Of course I worry for my own life, you never know what can happen, but I know that I have to go ahead, I can’t stop,” she said.

When questioned by a BBC reporter about his government’s record on human rights at the end-of-summit news conference, Kagame launched into a 26-minute tirade, saying he didn’t need “any lessons from BBC or anyone” and criticised the media for interviewing Ingabire.

“Take an example who is always written about and people who have been here, even during this CHOGM, you are visiting this woman called Ingabire — Victorie — whom BBC and others [are always presenting] as the face of opposition, that’s fine,” he said.

He claimed that no-one in Rwandan prison was being incarcerated unfairly and that there are people who are not in prison but should be, including Ingabire.

“This woman was released from prison before she served her full sentence,” he said.

“Some people decide to make her an angel for freedom and democracy, where does it come from? She’s out there, she’s not in prison but this I’m saying she should actually be in prison if we had [not] forgiven her.

Scotland praised Kagame for his stewardship of the country since the genocide and did not offer any criticisms of his human rights record.

“Where Rwanda had been in 1994 and you see where Rwanda is now, it is breathtaking,” she said.

When questioned by the BBC about her refusal to release an Ernst & Young report examining the Secretariat’s finances, she too bristled.

“It is deeply, deeply disappointing that the BBC who have such a remarkable reputation should have failed adequately to assure themselves of the facts,” she said.

Rwanda’s hosting of the summit has thrown the Commonwealth’s commitment to human rights into the spotlight, with the former French colonies Gabon and Togo, admitted to the group.

But Scotland said no country was perfect and the pair were welcome into the Commonwealth.

“There is not one country I can think of who can honestly say that they are without error, in need of improvement or opportunities to change,” she said.