There are many, many things to be concerned about in ESPN's recent report on Washington Commanders owner Dan Snyder, but one nugget in particular left head coach Ron Rivera steaming after his team's win over the Chicago Bears on Thursday.

After the game, Rivera ranted to reporters about negative coverage of the team and specifically denied the ESPN report that Snyder, not Rivera, had pushed to acquired embattled quarterback Carson Wentz last offseason.

Once finished, Rivera stormed out of the conference room.

"What's important is these guys, OK? For the last couples of weeks, honestly — I'm going to speak my mind for a second — it's been hard. It really has. You lose four games in a row and everybody wants to get on you. And they played their asses off. They have. They played their asses for everybody. They come out and they show up. They work hard, they don't complain. OK? They hear all this stuff and they got to deal with it. I get that and I respect them for it, because they're resilient.

"Everybody keeps wanting to say I didn't want anything to do with Carson. Well, bulls***. I'm the f***ing guy that pulled out the sheets of paper, looked at the analytics, watched the tape when we were in Indianapolis. And that's what pisses me off. Because the young man doesn't deserve to have that all the time. I'm sorry, I'm done."

The Commanders traded for Wentz plus a second- and seventh-round draft pick from the Indianapolis Colts in exchange for a second-rounder and two third-rounders. The move was widely questioned at the time, as the former second-overall pick looked nowhere near his former Pro Bowl form while with the Colts. 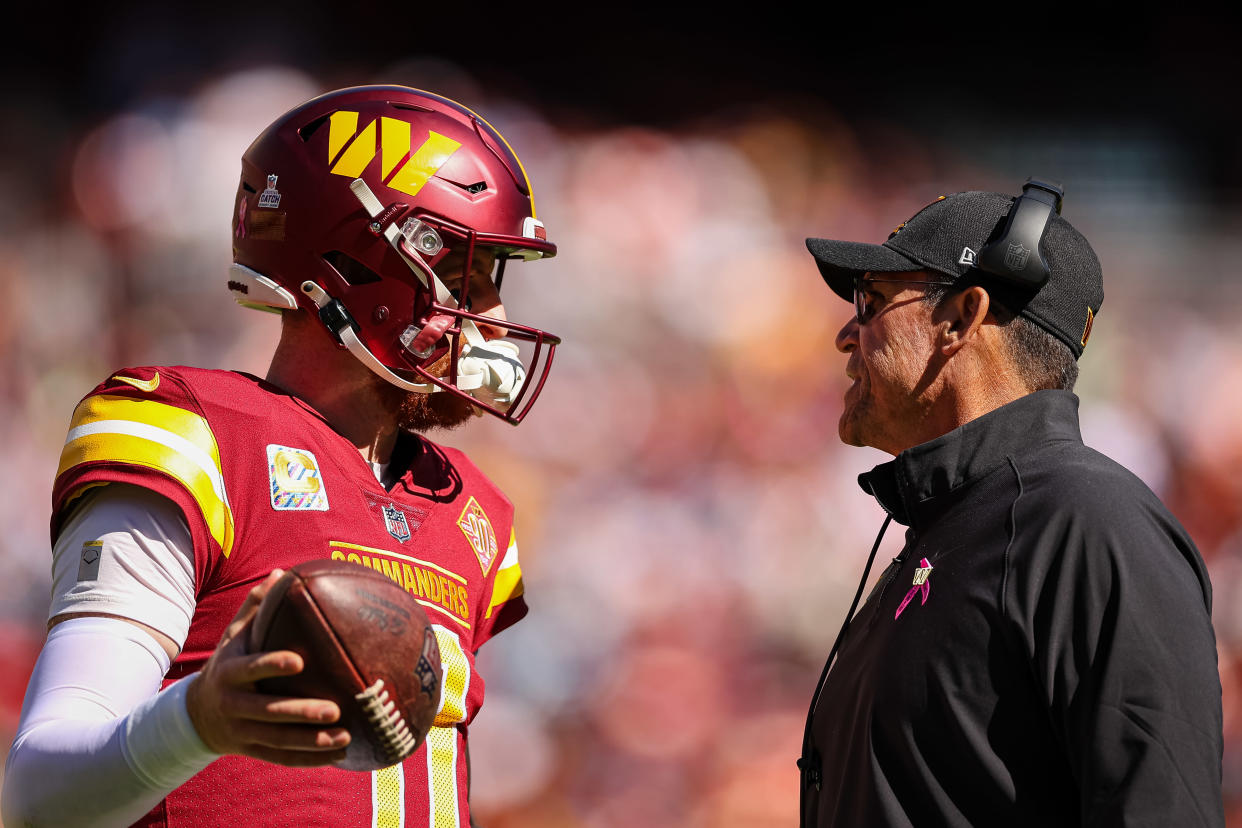 Wentz has so far posted a 64.1 completion percentage with 1,489 passing yards with 10 touchdowns in six interceptions. Despite the win Thursday, it had been a rough game for the passer: 12-of-22 with 99 passing yards.

According to ESPN, the move was purely born of Snyder's desire for a marquee quarterback in D.C. The article, which noted a denial from the team and Rivera, painted neither Snyder nor Wentz in a good light:

Sources familiar with the deal say that it was Snyder who pushed for Wentz — and Commanders football staffers have told people around the league as much. "It was 100% a Dan move," says a source with knowledge of the inner workings of the deal. But in the team's statement to ESPN, Rivera insisted that he had brought the idea of acquiring Wentz to Dan and Tanya, who supported it. "They love this game and this team," Rivera said.

Hearing that Snyder hopes a marquee quarterback will chase away all his problems, an owner laughed: "Carson Wentz?"

A report claiming Snyder pushed to acquire Wentz should be the least of the billionaire's problems — it basically alleges he is threatening the NFL with blackmail on other owners so he can keep his team despite rampant sexual misconduct allegations — but the shot at Wentz clearly bothered Rivera.

Workplace misconduct allegations and more Snyder ugliness have hung over the Washington franchise since Rivera was hired, but it must be different when the latest report concerns his own players.