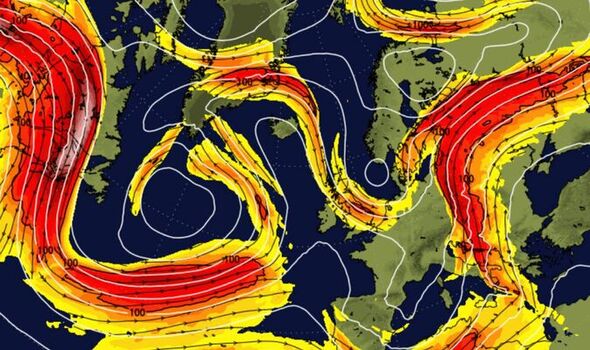 The Arctic deluge powered by freezing northerly winds ahead of the weekend will drive out milder temperatures forecast over the next 48 hours.

After nudging mid-teens today and Wednesday, thermometers will nosedive below freezing as bitter gusts threaten a Polar windchill.

The topsy-turvy weather, driven in part by a meandering jet stream, threatens to hold out until Easter.

“There will be snow and, in some places, especially over high ground of the Grampians and the highlands of Scotland it could really pile up.

“It is also going to turn cold again, and this pattern of flip-flopping between mild, cold and wet is likely to continue until Easter.”

In the meantime, Britons should have brollies and raincoats to hand for a dousing of April showers.

A warm front laden with moisture from the Atlantic will sweep the nation before the freeze sets in.

Mr Dale said: “Most people will have a mild day on Tuesday and Wednesday as a warm front comes it, but this will come with rain.

“However, it will turn cold again later in the week and while not everywhere will get snow, we are expecting a return to universal frosts.

“The change in weather is largely the result of the jet stream, which at the moment is in a snaking, meandering phase over the UK.

“The jet stream controls the polar front, so when it moves southwards later in the week, this allows the cold to follow through behind it.”

James Madden, forecaster for Exacta Weather, added: “There will be an ongoing risk of showers, and this could continue on and off through the start of April and possibly until mid-month.”

Forecasters largely agree winter is about to ‘fight back’ with parts of the country at risk of ‘impactful’ snowfall.

Some regions are braced for flurries sooner than Thursday, with government snow alerts in force over Scotland today.

The Met Office warns up to four inches could settle in the most at risk regions through Tuesday.

Heavy rain will gradually turn to snow which could settle over high ground leading to travel disruption.

A Met Office spokesman said: “Persistent rain over northern Scotland will increasingly turn to snow over high ground during Tuesday morning, then to lower levels by the afternoon.

“This is likely to bring some temporary accumulations in places to sea-level, with two to five centimetres above 100-200m in places and perhaps 1centimeters above 300m.

“There is some uncertainty by Tuesday night but snow is likely to clear northwards and turn back to rain leading to some snow melt.”

Netweather forecaster Jo Farrow said: “A cold front slides across Northern Ireland and Southern Scotland, then northwest England and north Wales by [this] evening with snow over the hill tops.

“The rain and snow continue over central and northern mainland Scotland into Wednesday morning.

“Further south, there will be brighter skies, some sharp showers on a brisk westerly wind and a marked change midweek through the UK to colder air as the wind veers to the north and the frost returns.”

Snowfall later this week will depend on to what extend mild, moist air from the Atlantic clashes with the polar incursion.

While Scotland and northern Britain are most at risk, nowhere is ‘immune’ from snowfall, according to Weathertrending’s John Hammond.

He said: “Temperatures will drop during the second half of the week.

“There are question marks over further frontal systems moving in off the Atlantic pushing into that cold air which raises the possibility of some rain turning to snow.

“Nobody is immune, but at this time of year it is high ground in the more northern areas which are more likely to see the more impactful snow.”