Sao Paulo: Brazil’s environmental authority has granted an initial permit to allow a major highway to be paved through the centre of the Amazon rainforest, the minister of infrastructure said, in a move that threatens to increase deforestation.

Right-wing President Jair Bolsonaro on the campaign trail had pledged to repave the BR-319 road, that would connect the capital of the Amazon state, Manaus, year-round to the Porto Velho in the state of Rondonia.

The road was originally constructed by the military dictatorship in the 1970s but rapidly fell into disrepair in the harsh conditions of the rainforest. Much of the route is an impassable stretch of mud during the roughly six-month rainy season. 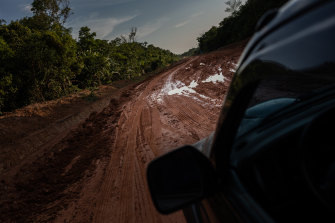 After 160km, BR-319 begins to devolve into what’s known as the “middle stretch”: 400km of crevices and mud-slicked sections so formidable that they cause vehicles to spin out. Credit:Raphael Alves/The Washington Post

Paving the road would allow illegal loggers and land grabbers to more easily access remote and relatively untouched areas of the forest, environmental experts said. A study estimated the project would result in a five-fold rise in deforestation by 2030, the equivalent of an area more than twice the size of Tasmania.

Bolsonaro’s weakening of environmental protections has already spurred soaring deforestation, with clearances of the Brazilian Amazon hitting a 15-year high in 2021.

Infrastructure Minister Marcelo Sampaio announced the permit on Twitter, posting an image of the licence from environmental agency Ibama. The agency did not immediately respond to a request for comment.

“In an alignment of engineering and respect for the environment, we are going to take the society of Amazonas state out of isolation,” he wrote. 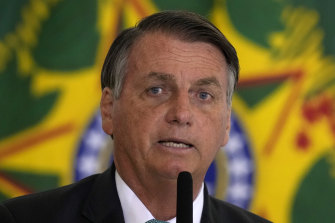 Sampaio did not immediately respond to questions about environmental concerns.

The initial licence will allow the government to contract companies to pave the largest middle section of the road that is in worst condition. Contractors will draw up plans but would need another permit to begin construction.

This first licence would stipulate many conditions in the plans that must be met to start construction, said Marco Aurelio Lessa Villela, a former environmental analyst at Ibama.

“There must be an enormous list of things … that would be necessary for a road in that place not to be a tragedy, Villela said.

Still, an initial licence means there is a good chance the road could move forward, he said.

Bolsonaro celebrated the decision in his weekly live internet address.

“I hope soon there’s one more licence on the way and our [Transportation Department] can start bidding and work for paving BR-319,” the president said.