There are thousands of them in the city; stuck to street signs and tucked inside elevators. Tiny signs that are vital to part of our population but go unnoticed by most.

Braille messages are found on all street signs in the CBD, at bus stops and on a selection of maps, park signs and public art, giving instructions and accessibility to the visually impaired. 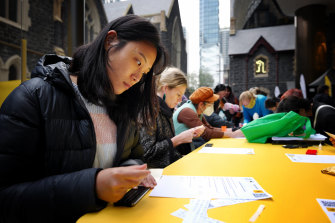 Typically small and placed just below visual signs, the braille messages carry a range of announcements, from simple road instructions to the numbers on elevator buttons.

The signs are typically regulated by braille organisations but a “braille-bombing event” run as part of Melbourne Knowledge Week has shown people how to make their own signs to add to the city’s collection.

Participants learned to braille their own name before making labels to mimic printed signs around the Melbourne Knowledge Week event, such as names of exhibits and the groups presenting.

They were also given pre-made braille to take away with them, offering positive messages to vision impaired people, such as: “Love braille”, “Love reading”, “Braille since 1829” and “Read on”.

“It’s like writing a tweet, counting all your characters but doing it backwards and in the mirror,” braille-bombing participant Amanda Kwong said. “It’s been a bit of a brain challenge but really an eye-opening experience.”

Jordie Howell, chair of the Australian Braille Authority, is visually impaired and said she used braille in every aspect of her life.

“I label items in the pantry or cosmetics … I use it for braille music. I’m a classical soprano at the church and I couldn’t sing in the busy choir that I do without the braille music in front of me,” she said. 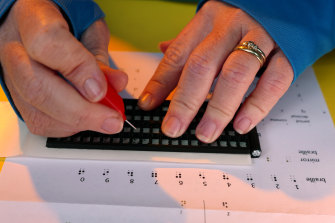 Kwong went to the event with friend Rhiannon Rowbotham after hearing about it through a running group for the vision-impaired, Achilles Melbourne, where they volunteer.

Achilles Melbourne partners runners who have low vision or are blind with sighted runners, who point out obstacles during twice-weekly meetings at the Tan.

Rowbotham said the running group inspired her to go to the braille bombing event. She said both were important to promote inclusion.

“I think that going forward, to make society accessible for everyone, it’s important that we all learn these skills, so it’s nice to have a fun and interesting introduction,” she said.

Leona Holloway, the organiser of the event and a researcher for the inclusive technologies group at Monash University, said the event aimed to spread awareness of the use of braille and install more braille signs throughout the city.

“The intention of the tour is to get more braille out there on the street for people to be able to use and also just to raise awareness of braille. It’s actually quite easy to produce and read.”

Your essential guide to the best things to see and do in and around the city. Sign up to our Culture Fix newsletter here.