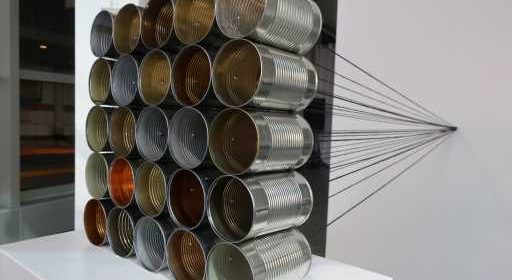 We tend to think of our personal data in terms of numbers: our phone numbers and pins, the digits on our Social Security cards and credit card accounts. We’ve been reminded repeatedly about their vulnerability and have learned to do what we can to protect information when we share it online, over the phone or at ATMs.

But Ben Coleman is a sound artist, keen to things like noises, vibrations and speech, and he wants to alert us to another threat to our privacy that comes in the form of audio surveillance. The world, as his new installation at downtown’s Understudy project space reminds us, has turned into a giant microphone with the ability to listen in nearly all the time, and to use the things we say to learn about us, and our interests and desires, and to turn that into profits.

The situation is absurd, really, and so is Coleman’s creative response, which he has titled “Eavesdroppings.” The piece is a machine of sorts that invites us to interact and consider the dark possibilities of every utterance, order or inquiry we make through our electronic devices.

It is a fearful contraption, loud and obnoxious at times, but it is also very funny. Coleman doesn’t give us much hope for plugging up the big ear that surrounds us, but he does offer a moment to relish the ridiculousness of it all.

And so, naturally, “Eavesdroppings” opens by greeting us with a creepy doll. Her name is Cayla and she is there to point out that it’s not just Siri or Alexa that have the potential to use our info.

Cayla is a legend in listening surveillance lore, an 18-inch tall, blond-haired baby doll with a fixed perkiness that possessed the capability of chatting with children using speech recognition technology. Turns out, bright-eyed Cayla might have been taking the innocent discourse of kids and mining it for advertiser data.

She was popular for a few years but was discontinued as a product in 2017, after an international outcry. “She was banned in Germany,” Coleman points out. “Parents were forced to destroy her with a hammer or face a 2,000 Euro fine.”

My Friend Cayla is no longer available on shelves, but Coleman found one on the internet. Then he researched open-source data sets online to find the code that was actually used for Cayla’s voice.

Then he gave her a new speech to make for his show. Exhibition viewers hear it when they enter the gallery and answer a toy telephone that is activated by motion sensors. Cayla confesses all about her shady past.

From there, the exhibition, and the racket it makes, ratchets up, as Coleman illustrates both the bigger problem and its inevitability. Though he does offer a few nonsensical solutions.

Want to outsmart your nosy iPhone or Galaxy? The answer is old-school. Simply take two empty tin cans and tie them together with a string and chat up your pals.

Want to muffle the ability of sonic spies to understand what you are saying? Just turn on a leaf blower while you talk.

“Eavesdroppings” suggests both, though its method of offering pre-tech options to consider is pretty high-tech itself.

Coleman has set up an entire bank of tin-can phones and assembled them into a grid. Visitors stand before them as they rattle off scores of random and unrelated lines of conversation. The artist again scoured the internet for his materials. Each snippet comes  from a data set of actual conversations recorded by workers around the world, which are used by tech companies to increase their ability to recognize speech patterns and fine-tune their listening capabilities.

It’s a cacophony of sound that underscores just how much of this work is going on. It is a bit confusing and considerably overwhelming.

Coleman does bring some coherence to the conversations by eventually pulling together snippets that talk about leaf blowers. When the dialogue about the lawn tools reaches a certain point, it triggers an actual trio of leaf blowers that begin throwing air, and a dampening white noise, about the room.

The blowers are pointed at a mountain of paper, thousands of tiny, thin strips, each just big enough to hold a typed-out sentence. The sentences were culled from the data sets, and Coleman cut each of them out by hand. They float around the room like snow.

In that way, “Eavesdroppings” is a flurry of ideas that surround its viewers. In one regard, it is complicated itself since it is powered by Coleman’s computer programming that makes everything work together.

But it is also kind of simple in what it says: We are all being listened to, and there is not much we can do about it, unless we are willing to abandon the conveniences we have all gotten used to, from music-on-demand to talking cars to smart speakers. Who wants to give up all that, even if it is uncomfortable to see ads for products pop up on your Facebook feed just moments after you were talking about the exact same items with friends?

“Eavesdroppings” is less hopeless than it is enlightening, and it is entertaining enough to get us through the challenges it presents.

Coleman, currently a resident at Denver’s RedLine Art Center, also composes music and makes videos and has a light touch, and his piece is impressively constructed. He doesn’t waste our time; the work is a fast, 15-minute adventure.

Like a lot of the fare at Understudy, it comes off as a quick, meaningful hit; artful and useful, urgent and amusing, and seductive.

Subscribe to our weekly newsletter, In The Know, to get entertainment news sent straight to your inbox.