Barriers removed and litter collected as the clean up operation begins

The clean-up operation has begun following the funeral of Queen Elizabeth II, as crowd control barriers were removed and council workers cleared litter.

In Westminster, central London, street cleansing vehicles and council workers were seen as teams swung into action to clean up litter and remove sand that had been spread on roads.

The clean-up also began along the Long Walk at Windsor Castle as workers picked up litter and crowd control barriers started to be removed following the committal service.

Images also showed a worker collecting thrown flowers after the procession of the Queen’s coffin through Hounslow.

After the committal service at St George’s Chapel, crowds started to disperse and workers descended on the Long Walk to begin the clean-up operation.

Up to two million people are thought to have lined the funeral procession route on the national Bank Holiday, created especially for the public to be able to say a final farewell to the Queen, who died on September 8, aged 96. 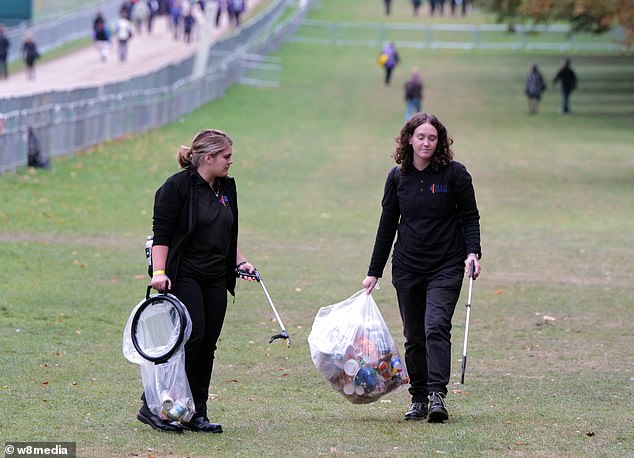 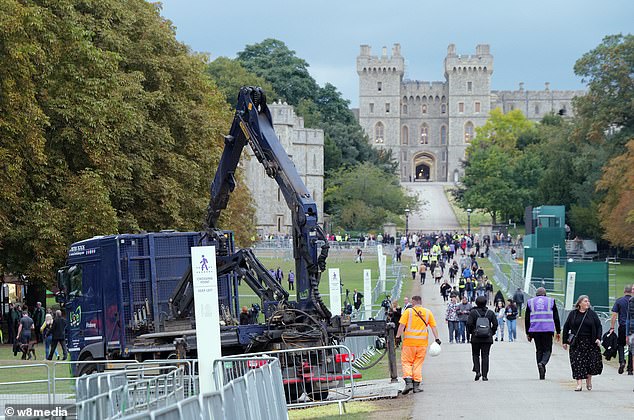 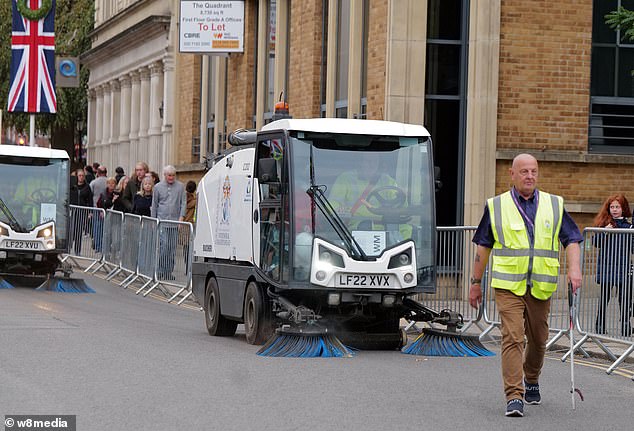 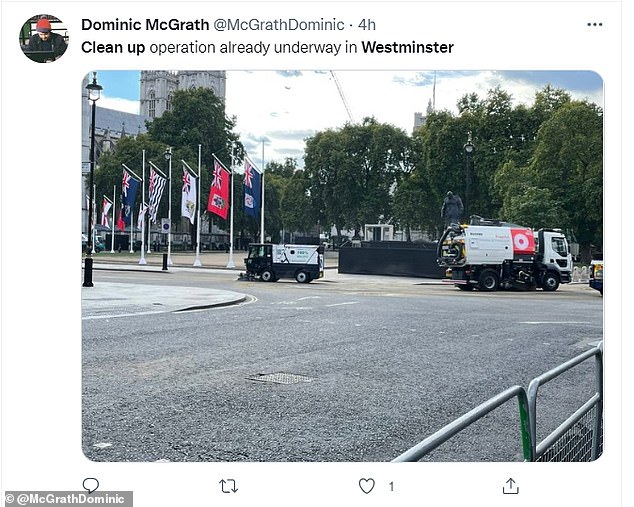 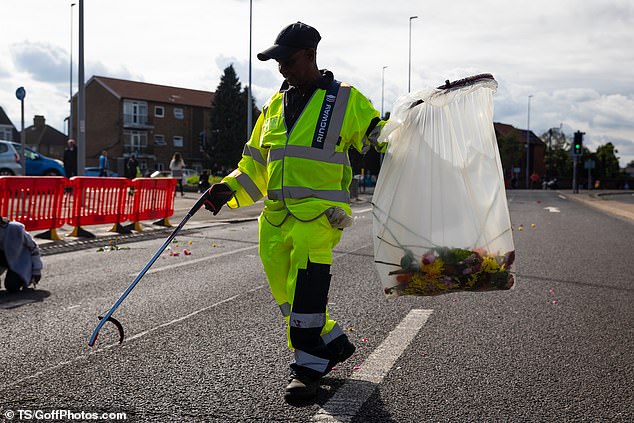 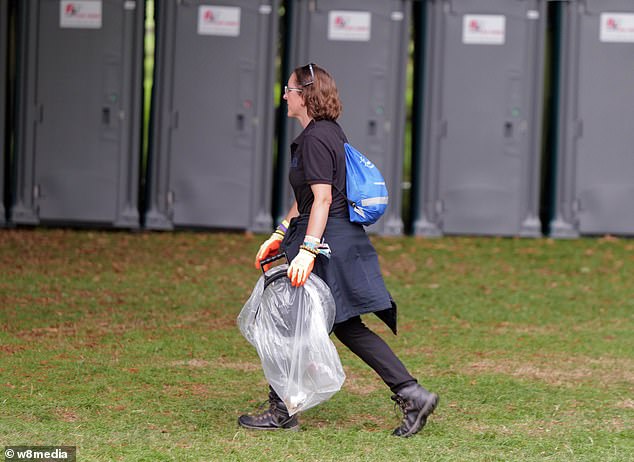 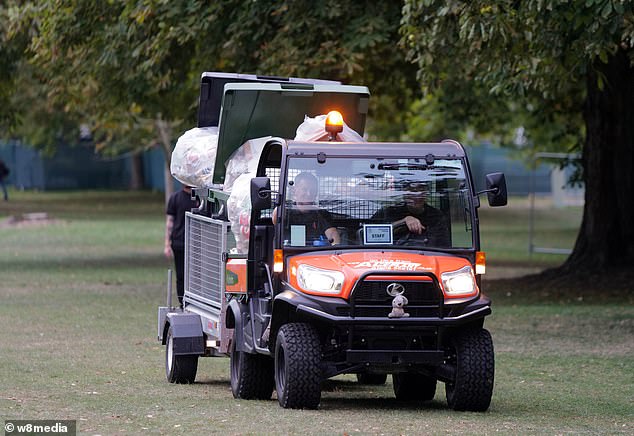 Filled bins were seen across London and Windsor after large crowds descended on the areas to see the Queen’s lying in state and funeral.

Garbage removal vans started to clear the rubbish as bags were driven away amid the clean up.

And in Southwark, where the queue for the Queen’s lying in state in Westminster Hall began miles away, council officials said they had completed a full inspection of the line’s route through the borough and cleared any litter.

Southwark Council said that, after a brief pause for the funeral, staff would continue to work with Government officials and the events company involved ‘to make sure that Southwark Park in particular is fully open and returned to its former splendour’.

In the park alone, many staff worked 24 extra hours over the four days of the lying in state to keep the green space clean, the council said.

An estimated seven tonnes of additional litter was gathered and removed over the same period. 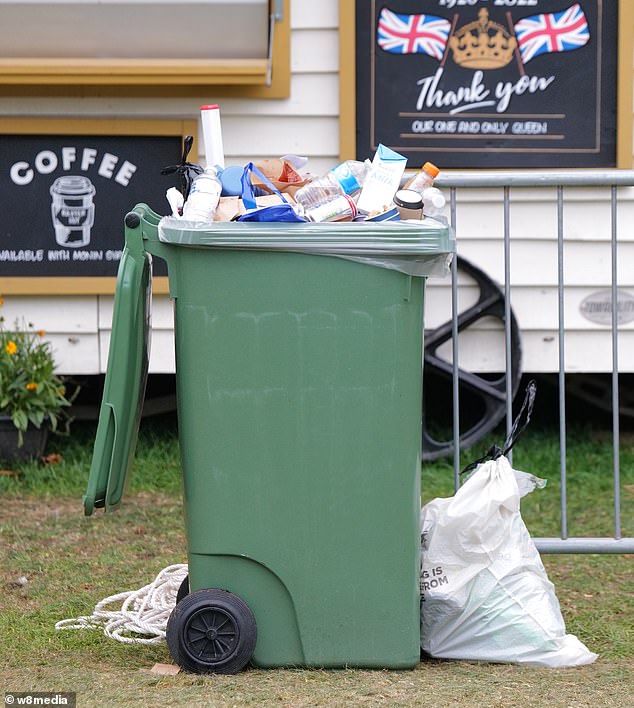 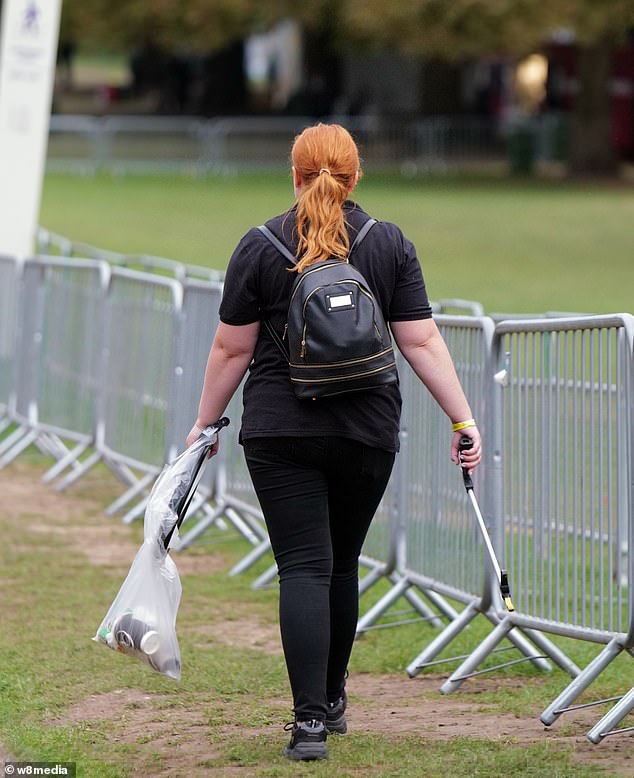 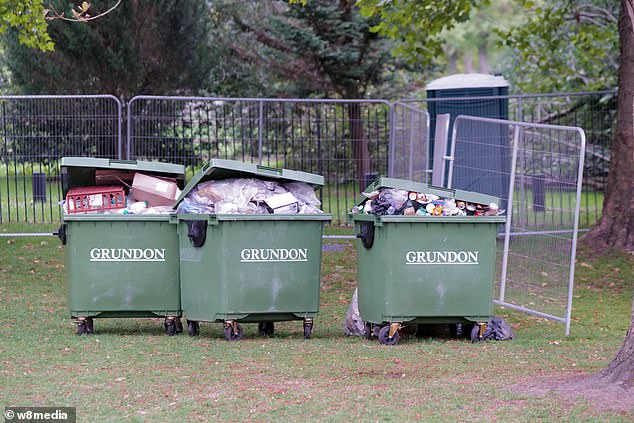 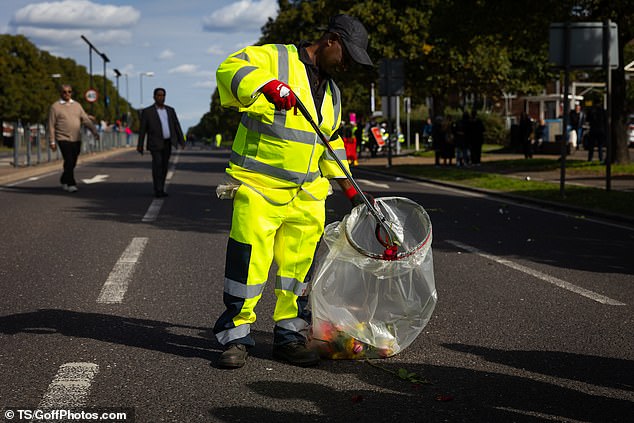 In Hounslow, a worker collected flowers that had been thrown as the Queen’s coffin passed through

Catherine Rose, cabinet member for parks, streets and clean air at the council, said: ‘Southwark has been proud, on behalf of its residents and local government as a whole, to play its role during this historic time in our nation’s history.

‘We’ve carried out extra street cleansing and waste collections to keep the queue clean and tidy, and ensure all mourners had a safe and pleasant experience.’

She added: ‘We know that for thousands of mourners, their memory of Southwark Park is the starting point to their personal journeys of reflection and paying their respects.

‘We welcome them to return at any point in the future.’

Westminster City Council said it had deployed additional teams to ensure the areas affected by the funeral were kept clean and presentable and to return central London to normal following a period of mourning. 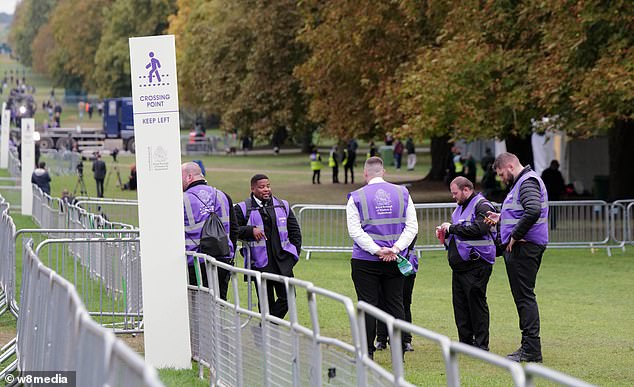 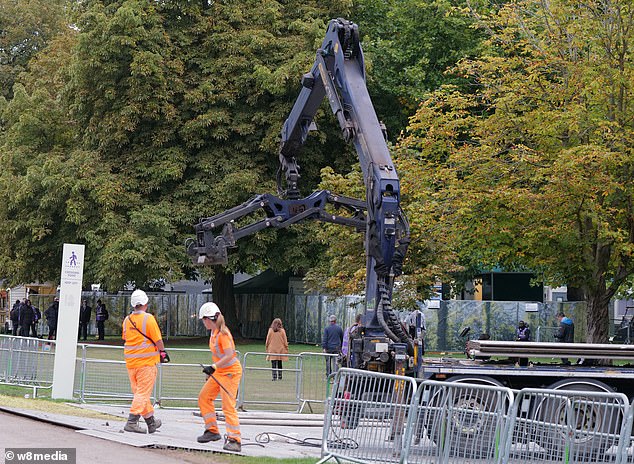 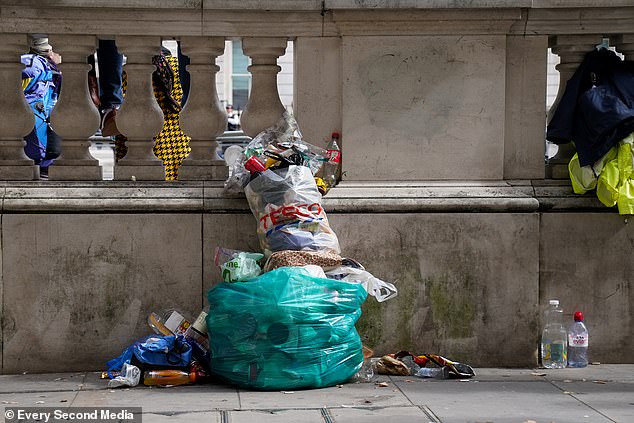 As a mark of respect, vehicles have been dressed in black ribbons and council workers have worn black bows while on duty, the council said.

In the days before the funeral, 25-35 additional people were deployed daily to provide additional cleaning around the Strand, Hyde Park, Marble Arch, Park Lane, Vauxhall Bridge, Marylebone and Mayfair.

Following the funeral, staff are being deployed into affected areas as soon as possible, starting at Parliament Square, with more than 150 people and 19 vehicles in 11 teams to help clear litter and remove the sand on roads, to prepare for central London reopening.

A council spokesperson said: ‘Westminster City Council is well equipped to deal with the city at full capacity. Preparations have been in place to handle the influx of visitors wishing to pay their respects to Her Majesty the Queen. 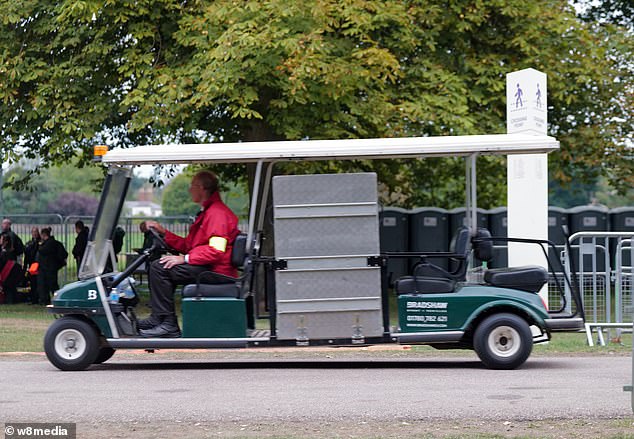 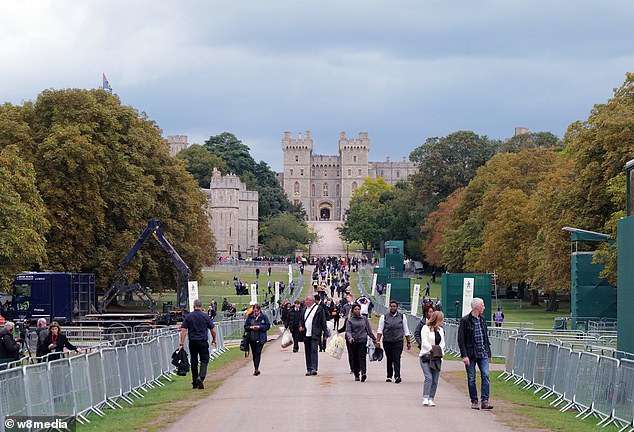 As mourners dispersed from the Long Walk in Windsor (pictured), council workers started cleaning up 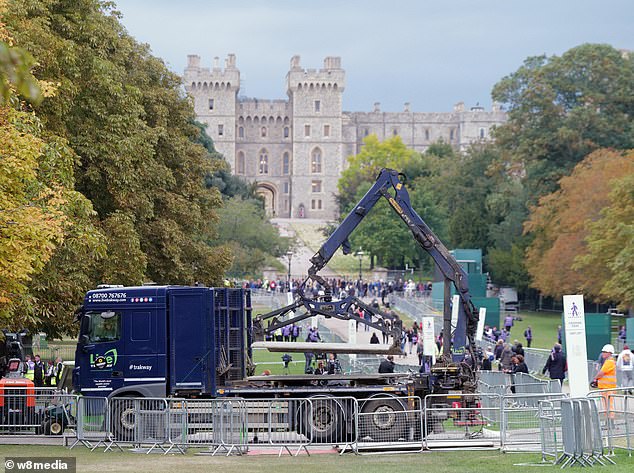 Vehicles were brought in to remove crowd control barriers in Windsor

‘Our cleansing teams have been working incredibly hard to ensure that our city remains a clean environment for all.

‘We will continue to work with partners to ensure that cleansing operations run as smoothly as possible, making visitors and residents feel comfortable.’

Whitehall and Parliament Square remained busy on Monday with sightseers and TV crews, and while workers were steadily removing crowd-control barriers, some of the major roads remained closed.

The clean-up operation was still under way by 5pm, with Parliament Square being scrubbed clean and some workers still sweeping the pavements.