Adnan Syed's murder conviction has been overturned by Baltimore court

Adnan Syed is FREED from prison after 23 years for murder of ex-girlfriend: Baltimore court vacates conviction after hit podcast Serial cast doubt on his guilt

Adnan Syed’s murder conviction has been vacated after he served 23 years in prison for the murder of his girlfriend Hae Min Lee following a ruling on Monday in a Baltimore courtroom.

Following an hours long hearing in Baltimore’s Circuit Court, Syed’s 2000 conviction for the 1999 murder was vacated.

He is being released to home detention as the judge ordered a new trial. Circuit Court Judge Melissa M. Phinn said that her decision was ‘in the interest of justice.’ As the judge’s ruling was read out, the courtroom erupted in applause.

Syed, 41, was serving a life sentence plus 40 years after he was convicted in 2000 of strangling Lee and burying her body in a shallow grave in Baltimore’s Leakin Park. Syed and Lee were high-school classmates who had dated.

Though he was 17 at the time of the murder, Syed was tried as an adult. He has perpetually maintained his innocence.

Syed will now face a new trial in the case. At the time of writing, the trial date has not been set.

After the judge’s ruling was read out, Syed sat smiling at the trial table with his attorney, Erica Suter, who was crying, according to the Baltimore Banner’s Justin Fenton.

As he stepped out of Baltimore’s Circuit Court, he was met with more applause. He did not make a statement. Syed wore a shirt and tie along with a knit hat and clutched a blue Georgetown University folder as he made his exit to freedom.

State’s Attorney Marilyn Mosby told the media that her office were not yet declaring Syed an ‘innocent man.’ She did reiterate the need for a new trial in which Syed has proper legal representation.

Mosby stopped short of saying that her office will drop the charges against Syed. According to Maryland law, her office has 30 days in which to charge him again with the murder of Hae Min Lee. 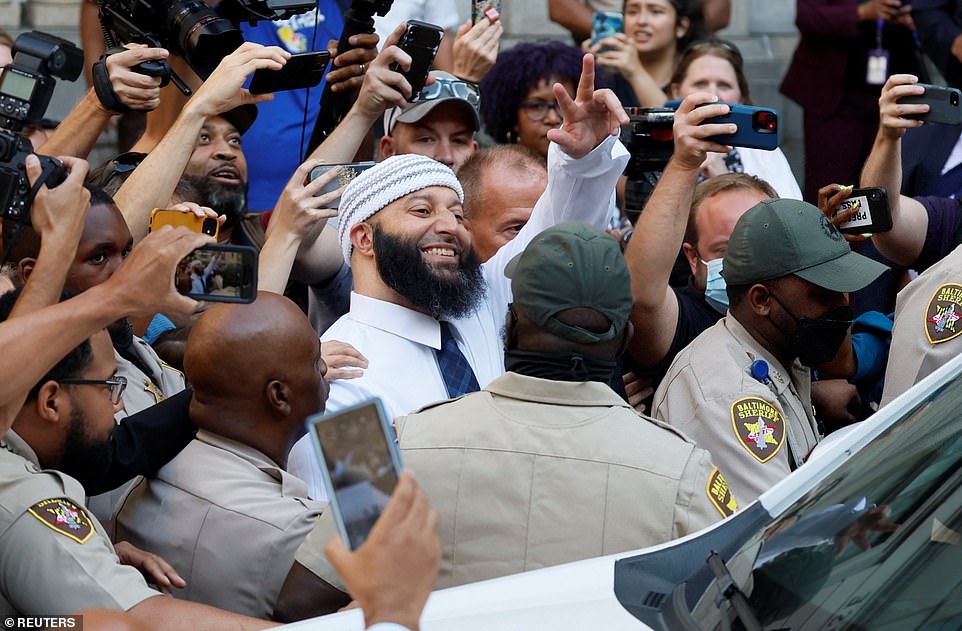 Syed is greeted by supporters outside of the courtroom, according to authorities he will face a new trial in the case 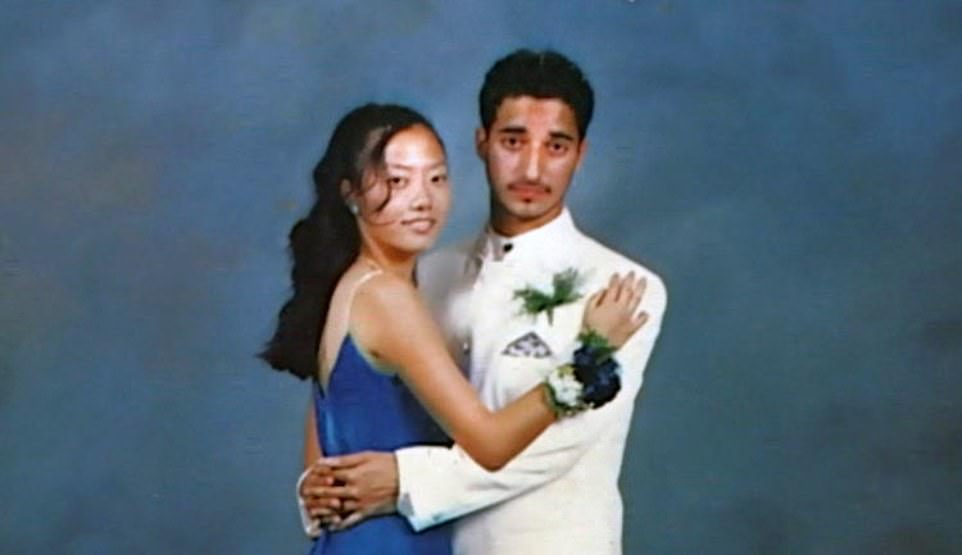 Syed was convicted of strangling Lee (with him above at prom). The two were high school classmates who had dated 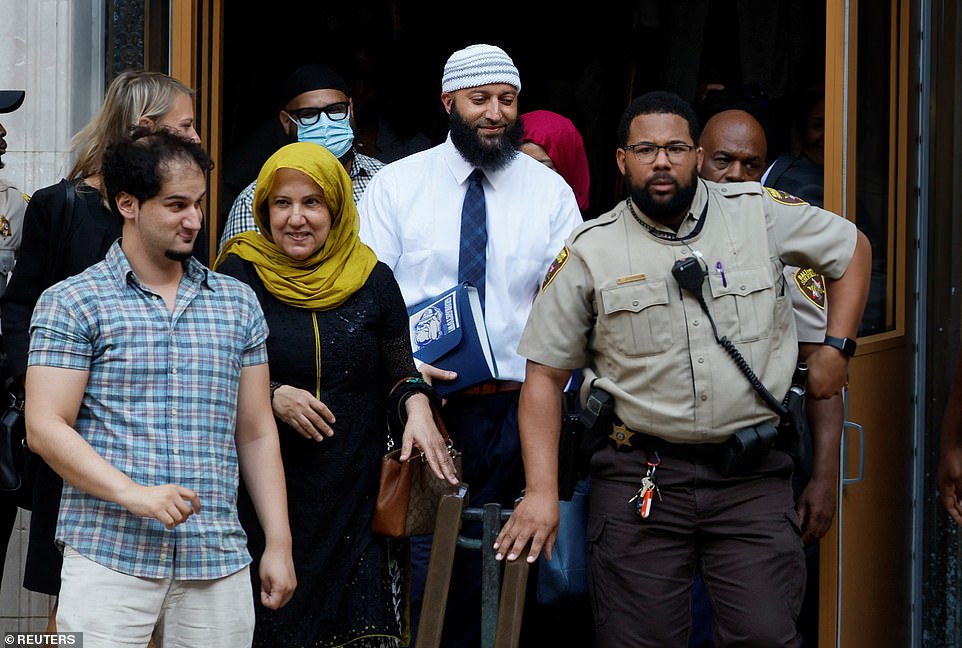 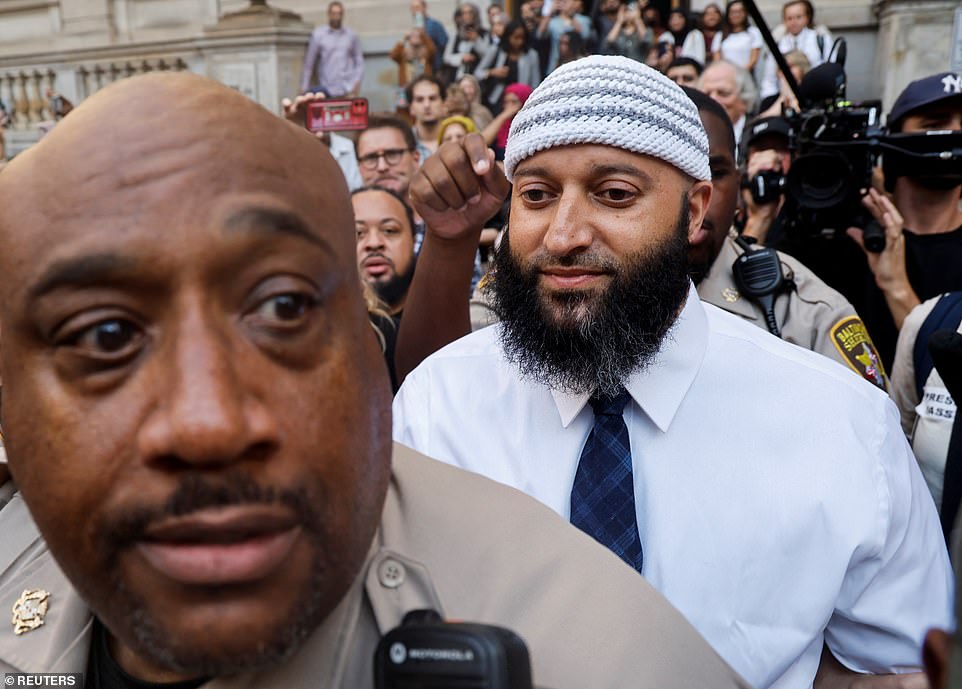 As he stepped out of Baltimore’s Circuit Court, Syed was met with applause but he did not make a statement 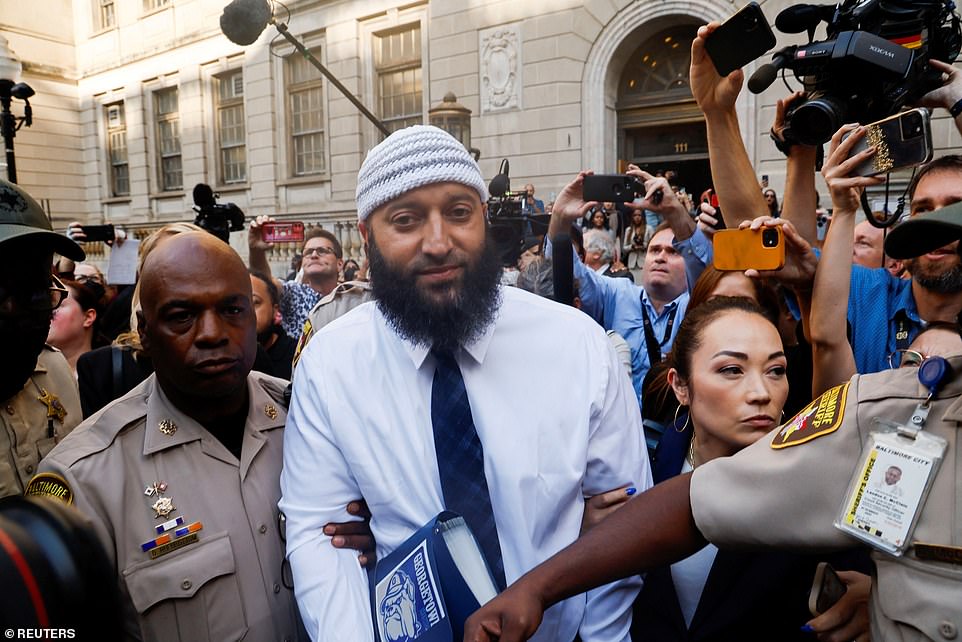 After the judge’s ruling was read out, Syed sat smiling at the trial table with his attorney, Erica Suter 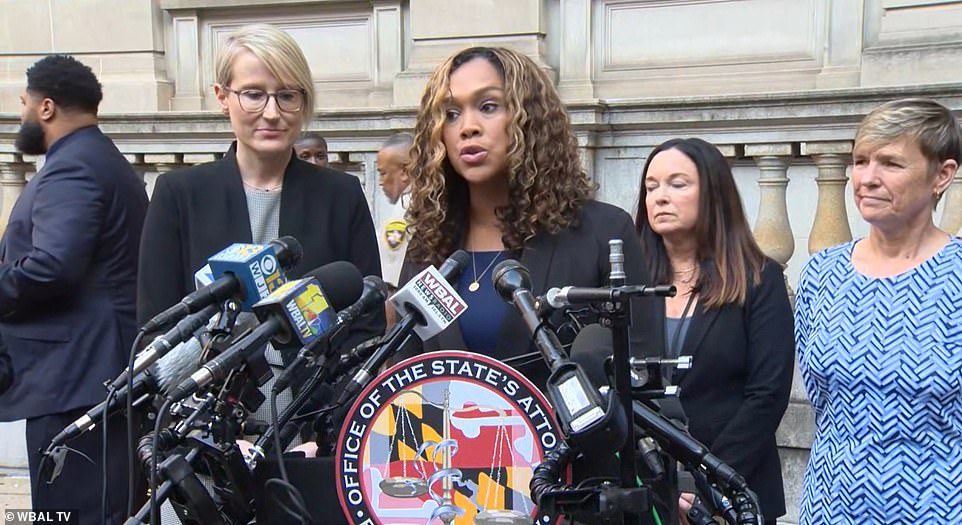 Prior to the decision to vacate the murder conviction, a lawyer representing Lee’s family, Steven Kelly, launched a blistering attack on State’s Attorney’s office, calling the hastily arranged hearing ‘outrageous.’ Kelly said that the family did not have an appropriate amount of time to prepare for the hearing.

Among the reasons for the outrage was the fact Lee’s brother, Young, wanted to attend the hearing but couldn’t due to work.

Young did address the court saying: ‘My heart is kind of pounding right now… I personally wanted to be there in person. I’ve been living with this for like 20 plus years. Everyday when I think it’s over… or it’s ended, it always comes back. It’s killing me. It’s really tough.’

He also spoke about how difficult it is to know that despite always thinking the right person was in prison for his sister’s murder, now there are other suspects who are roaming free.

Young Lee added: ‘This is not a podcast. This is real life. This is a 20 plus year nightmare.’

Syed appeared in court wearing a shirt and tie, he had his handcuffs removed prior to his appearance in the courtroom. 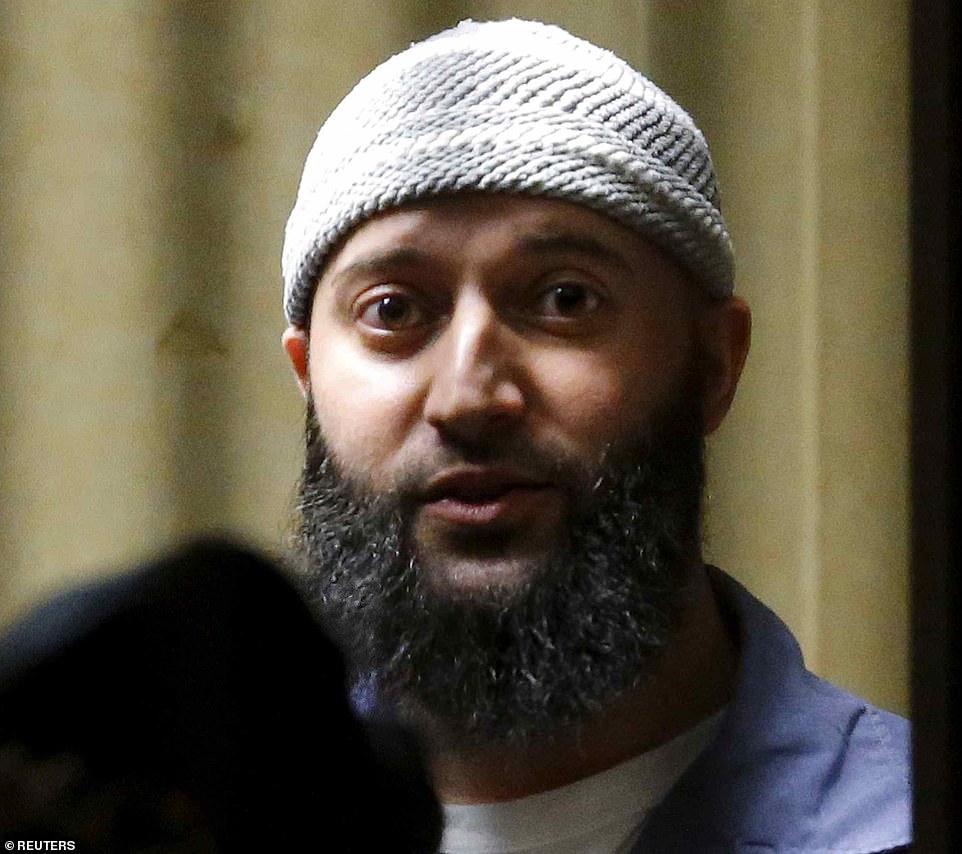 Prosecutors in Baltimore wereasking for Adnan Syed, pictured here in 2016, to be re-tried for the 1999 murder of Hae Min Lee 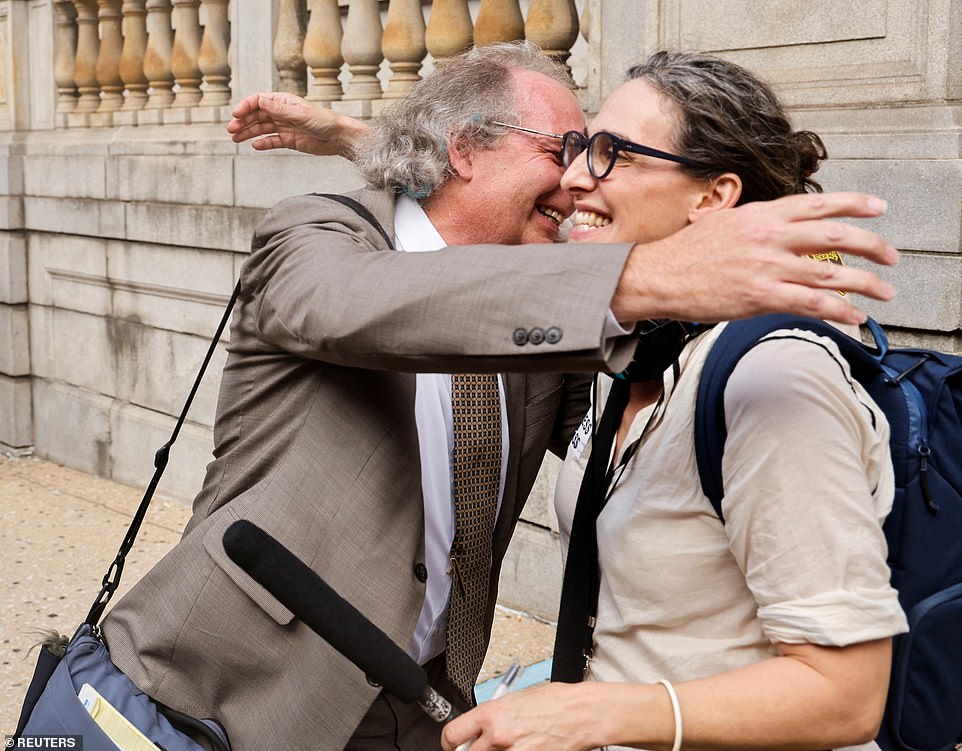 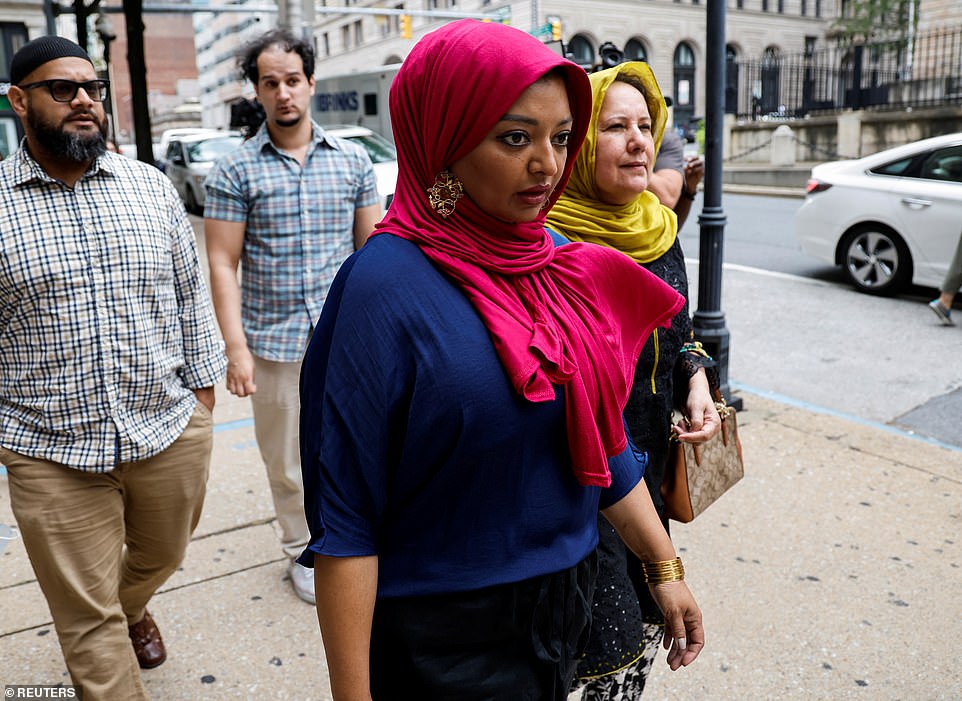 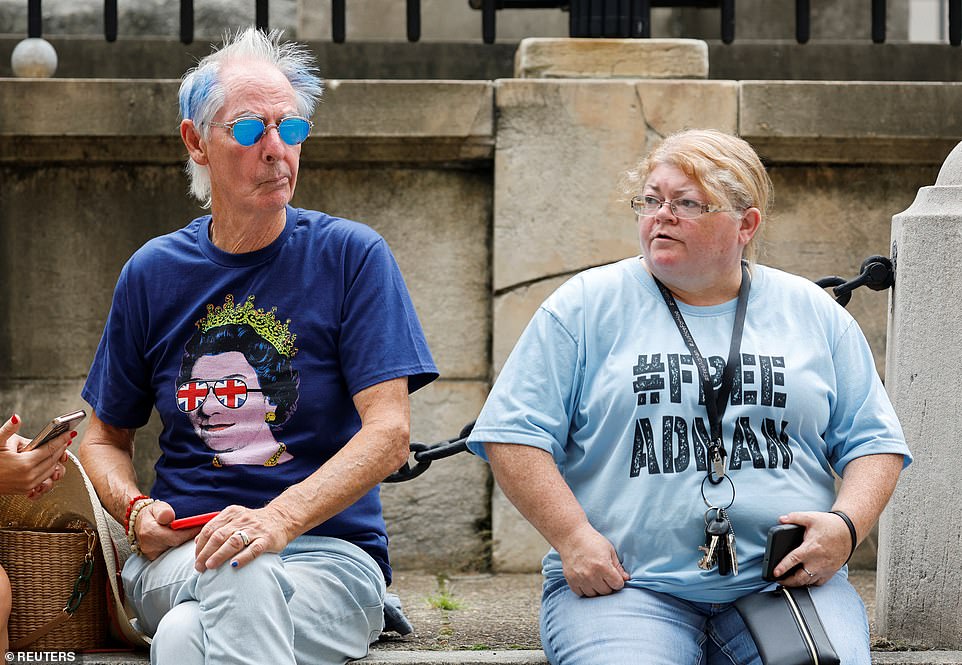 Mickey Tait, clad in a shirt featuring Britain’s Queen Elizabeth, sits next to Catina Carter, wearing a T-shirt with the name Adnan Syed whose case was chronicled in the hit podcast “Serial,” as they wait outside the courthouse for developments in the hearing today

One of the speakers in the courtroom was Becky Feldman, chief of the State’s Attorney’s Office’s Sentencing Review Unit.

Feldman has been investigating Syed’s case since June 2022.

Among her findings was that another possible suspect had previously threatened to murder Lee, despite prosecutors knowing about this, the information was never passed on Syed’s defense.

One of the alternative suspects had a history of violence against women including a conviction for several rapes.

Feldman made reference to AT&T publicly stating that the cellphone data that was used to put Syed at Lee’s burial site around the time of the murder was not reliable.

She went on take aim at the state’s witness in the Syed case, his former friend Jay Wilds who testified against him. Feldman said: ‘He gave two different accounts to police about where saw the victim’s body.’

In a report on her findings, Feldman said: ‘It is in the interests of justice and fairness that these convictions be vacated and that the defendant, at a minimum, be afforded a new trial.’

Syed’s lawyer, Erica Suter, began her remarks by saying: ‘My client is innocent.’ She added: ‘Mr. Syed’s conviction was built on a flawed investigation.’ 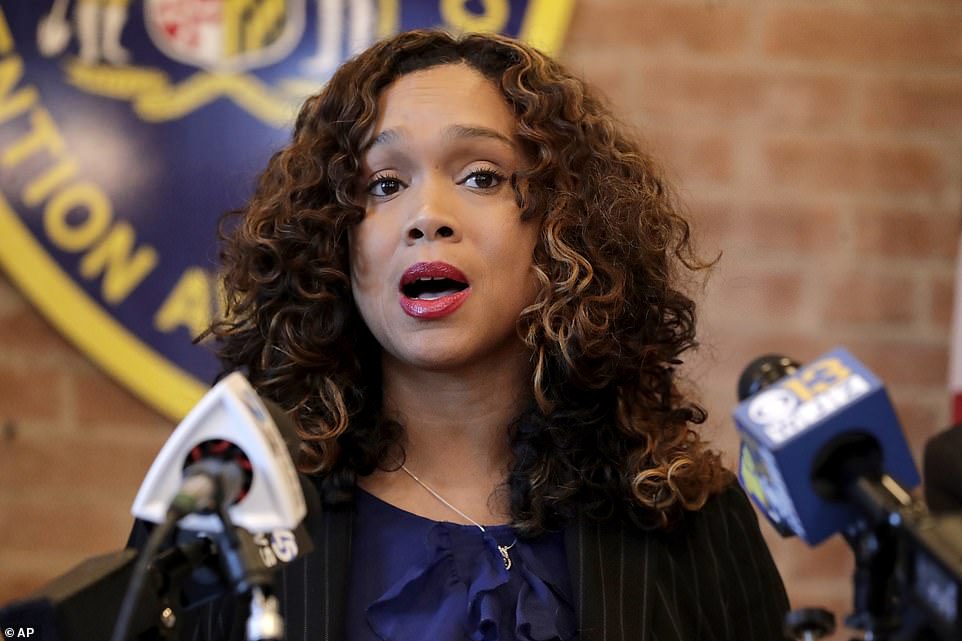 The motion to vacate Syed’s conviction came on Wednesday, the state’s attorney for Baltimore City said that new evidence cast doubt on Syed’s conviction, asking for his guilty verdict to be vacated and a new trial date set.

The office of State’s Attorney Marilyn Mosby also recommended in the motion that Syed, who is currently serving life behind bars, be released without bond pending retrial.

The motion says that prosecutors are not asserting that Syed is innocent in the case, but that ‘the State no longer has confidence in the integrity of the conviction’.

Monday was supposed to see the start of Mosby’s federal trial on perjury and mortgage fraud charges. That trial will now not start until March 2023. The delay is not related to the Syed case.

If follows a year-long investigation by prosecutors and defenders that uncovered new information concerning the possible involvement of two alternative suspects.

Prosecutors said that the two suspects were known to the initial investigators in 1999, but were not properly ruled out.

The motion, which was first reported by the Wall Street Journal, did not name the two alternative suspects, citing the integrity of the investigation. 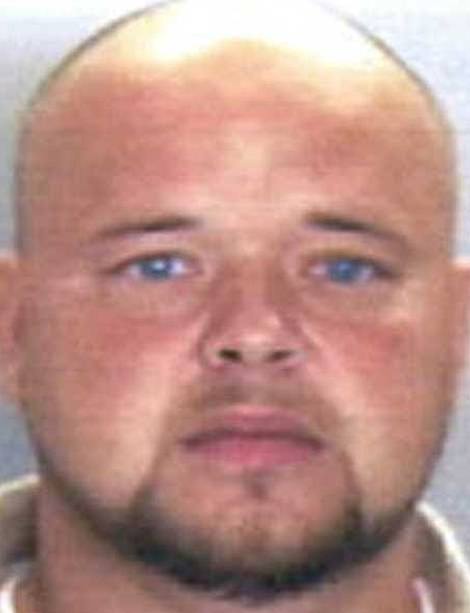 Though it’s unclear who the alternate suspects are, one named floated by the Serial podcast was Ronald Lee Moore, who had left prison days before Lee’s death and committed other crimes similar to her killing.

Moore committed suicide in 2008 while jailed for unrelated crimes, and police said he was a suspect in a series of burglaries, unsolved sexual assaults and homicide cases in Maryland in 1999.

The filing also says that prosecutors at trial failed to hand over key information to the defense team as required, in what is known as a Brady violation.

The withheld information included a witness statement about threats against Lee uttered by one of the other suspects, including the threat to kill her.

Prosecutors also called into doubt the validity of cell phone records and data that were presented in the original trial as key evidence for the state. 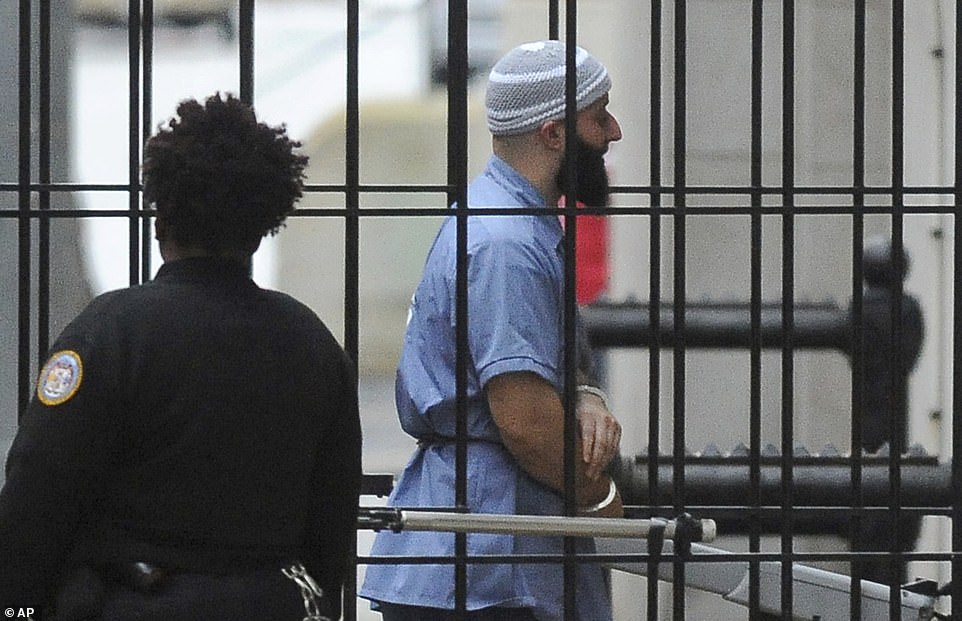 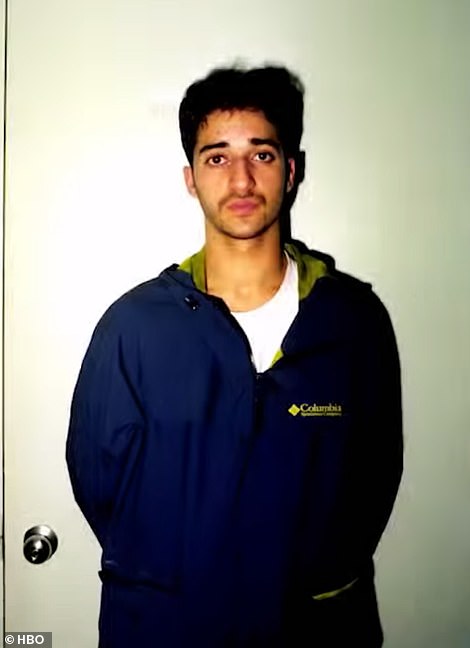 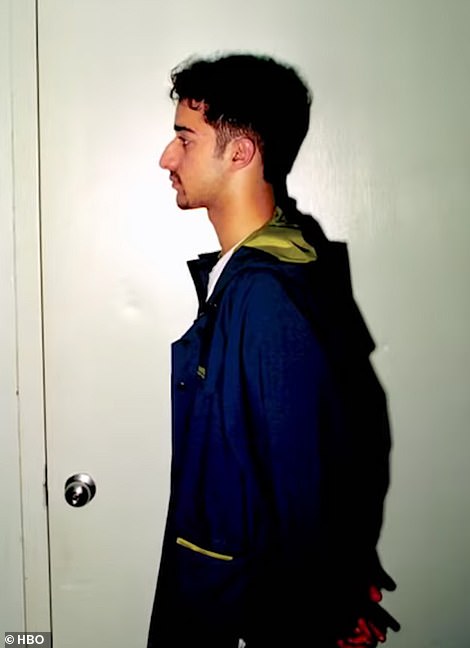 Though he was 17 at the time of the murder, Syed was tried as an adult. He has perpetually maintained his innocence

‘Given the stunning lack of reliable evidence implicating Mr. Syed, coupled with increasing evidence pointing to other suspects, this unjust conviction cannot stand,’ said Syed’s attorney Erica Suter, of the public offender’s office, in a statement.

‘Mr. Syed is grateful that this information has finally seen the light of day and looks forward to his day in court,’ added Suter, who is also Director of the Innocence Project Clinic.

In its debut 2014 season, the ‘Serial’ podcast broke podcast-streaming records and shined a spotlight on the case that led to renewed court proceedings.

Lee’s family, who believe Syed is guilty of her murder, have slammed the podcast saying it compelled them to ‘relive a nightmare we thought was behind us.’

In March of this year, a judge order that evidence from the case, including the victim’s rape kit, be tested for DNA using technology that was not available at the time of the murder.

It’s unclear whether the results of that testing played into the motion filed on Wednesday.

It follows a series of legal twists and turns in the case. 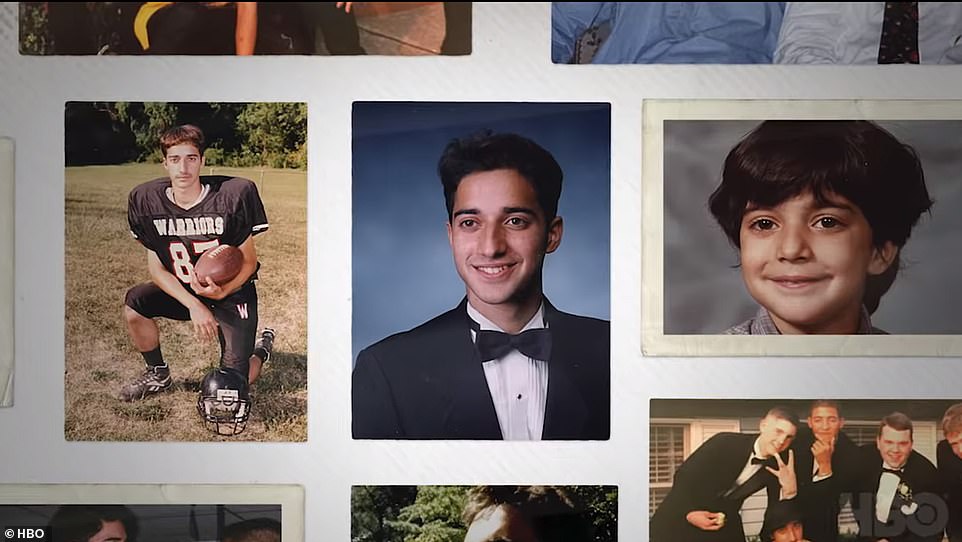 Syed, now 40, is serving a life sentence plus 40 years after he was convicted in 2000 of strangling Lee and burying her body in a shallow grave 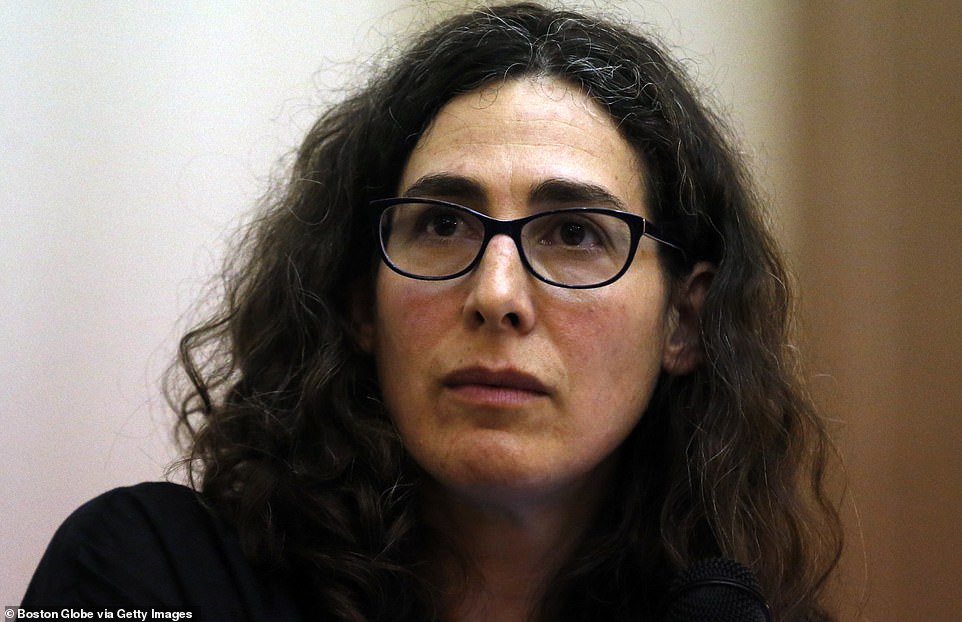 Sarah Koenig, producer and host of the podcast Serial, is seen in 2015

Two courts previously rejected Syed’s requests for a new trial based on claims of ineffective counsel.

His lawyer during his first trial, Cristina Gutierrez, failed to contact an alibi witness, Asia McClain, who said she saw Syed at a library at the time prosecutors say he strangled Lee in 1999. Gutierrez has since died.

But in 2018, the Maryland Court of Appeals denied Syed a new trial in a 4-3 ruling, even though it agreed his trial lawyer’s work was lacking.

The state high court said there was little chance the outcome would have been different had Gutierrez done what she should have.

Then in 2019, the US Supreme Court rejected Syed’s bid for a new trial.

Maryland Attorney General Brian Frosh in a statement at the time said the evidence against Syed ‘was overwhelming.’

‘We remain confident in the verdict that was delivered by the jury and are pleased that justice for Hae Min Lee has been done,’ he said.