A man charged with four counts of assaulting police in the midst of violent anti-lockdown demonstrations has been granted bail after his lawyer told a court he doesn’t want to be involved in protests anymore.

On Thursday Elwood man Ulric Wharerau was charged with 20 offences over allegations he assaulted and resisted police, intentionally caused injury, committed assault with a weapon and rioted during the demonstrations in Melbourne’s inner-east on September 18.

Police lines were overrun in Hawthorn in September.Credit:David Estcourt

The 52-year-old was identified after Prime Taskforce detectives poured over footage provided by Seven News that captured many demonstrators hurling projectiles and abuse at authorities before surging through the police line, screaming and being soaked in capsicum spray as they went.

Mr Wharerau, a former bus driver who refused to get vaccinated and has since been laid off, appeared in the Melbourne Magistrates Court via videolink from Moorabbin police station and said little throughout Friday afternoon’s bail application.

Defence lawyer Katie Powell told magistrate Susan Wakeling that her client had no intention of continuing to protest.

“He instructed that he’s very much aware that the protests that occurred on September 18 escalated, they were clearly not peaceful, and it is something he has instructed that he has no wish to be involved with any such protest,” she said.

Police allege that Mr Wharerau had three clashes with police throughout the day of the anti-lockdown Worldwide Freedom Rally demonstration that snaked through the suburbs of Richmond, Hawthorn and Kew.

Senior Constable Sean Armstrong said that three officers were standing in the police line on Burnley Street in Richmond when they first saw Mr Wharerau standing a few metres away carrying a glass bottle, which they told him to put down.

“The accused has approached the front of the group of protesters, adjusted his black face mask to cover his mouth, and using a baseball pitcher-like throw has discharged the glass bottle directly at [the officer’s] head,” he said.

The bottle struck an officer on the right side of his eye socket, ricocheted, and struck a second officer on the jaw. Mr Wharerau then disappeared into the crowd.

In the second alleged incident, Mr Wharerau appeared from behind bushes on Bridge Road in Richmond and threw a handful of rocks at a junior officer who formed part of the cordon. The officer was not injured, and Mr Wharerau again disappeared following the alleged attack.

The third alleged incident occurred in Kew when the crowd charged at officers and the police line was broken.

Senior Constable Armstrong said Mr Wharerau was moving towards police, and they asked him to “please stop”, which he ignored. They then deployed capsicum spray “directly to the accused’s face” before he continued to rush and collided directly with the police officer. 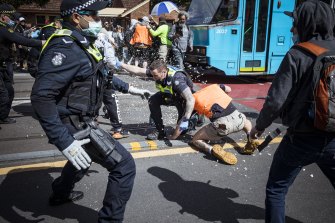 “This was described as a hip-and-shoulder style bump,” Senior Constable Armstrong said.

Last month police officers expressed anger and dismay at what they say were major tactical and communications errors from police command that led to several injuries during the violent protests. Victoria Police is now conducting a review.

About 2000 police had been deployed as part of the daily operation but only a small number were present when the protest turned violent. The rest, including specialist units with shields, riot gear and non-lethal weapons, remained in the CBD and Richmond. About 235 demonstrators were arrested. 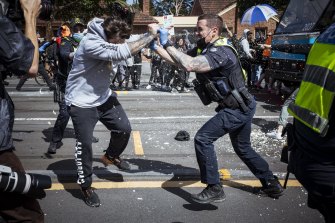 Ms Wakeling granted Mr Wharerau bail with the special condition that he not breach Chief Health Officer directions. He will return to court in February next year.