Doug Emhoff defends Kamala Harris over criticisms: 'To be first … is hard'

Second gentleman Doug Emhoff defended Vice President Kamala Harris over her low approval ratings and downplayed frequent criticism against her while accompanying her on her first European trip since taking office.

“One of the things I’ve learned from being married to Kamala Harris is that to be first in so many things is hard,” Emhoff said at a forum on gender equality in Paris, according to the Washington Examiner. “She said once that breaking barriers involves breaking, and when you break something sometimes you get cut, and when you get cut, sometimes you bleed. … But it’s worth it.”

Harris is the first woman and first South Asian and Black person to serve as U.S. vice president.

Since taking office Harris has taken a tremendous amount of criticism – over her role as U.S.-Mexico border czar, taking only one trip to the southern border, to an apparent attempt at a French accent while speaking with Parisian scientists this week.

Is she using a FRENCH ACCENT?!”  Abigail Marone, press secretary for Sen. Josh Hawley, R-Mo., wrote on Twitter. “I love this episode of Veep.” 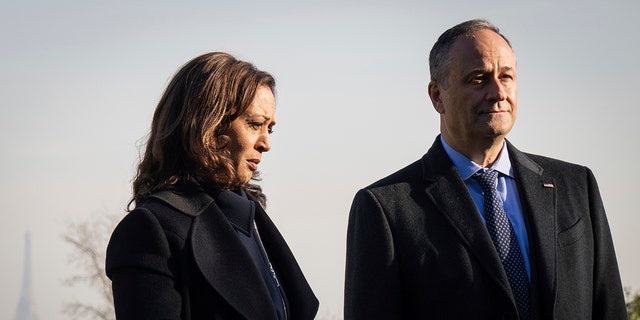 Harris also met with French President Emmanuel Macron during the five-day trip to help mend relations with America’s historic ally following a blundered submarine deal with Australia that left France out in the cold regarding its own deal, the Examiner reported. President Biden met with Macron late last month.

“I think we share this belief that we are at the beginning of a new era, which presents us with many challenges, but also many opportunities,” Harris said, according to USA Today. “Building on the great conversation that you and President Biden had, I look forward to the next few days. We’ll work together and renew the focus that we’ve always had on a partnership.”

A recent USA Today/Suffolk University poll showed Harris having a 28% approval rating among Americans, which is 10 points lower than Biden’s.