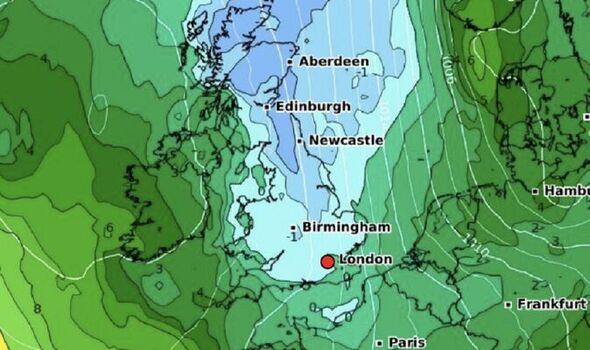 A bitter Arctic plunge will sweep into Britain this weekend as parts of the nation wrap up for -3C winds. The hottest summer in history will feel like a distant memory as polar air drives temperatures down more than 10C from the start of the week.

A near 2,000-mile dome of high pressure will build across Britain steering winds in northerly winds while keeping milder Atlantic breezes at bay.

Jim Dale, meteorologist for British Weather Services, said: “The remains of will Hurricane Danielle move away and allow high pressure to build to the west of the UK.

“This will encourage northerly winds to come in, and this is going to affect temperatures by the end of the week.

“Temperatures are going to drop quite rapidly, and most places will lose a few degrees in the daytime while dropping to single figures overnight.

“It will start to feel colder towards the end of the week before this dome of high-pressure stalls across the UK allowing cold air to move across the UK.” 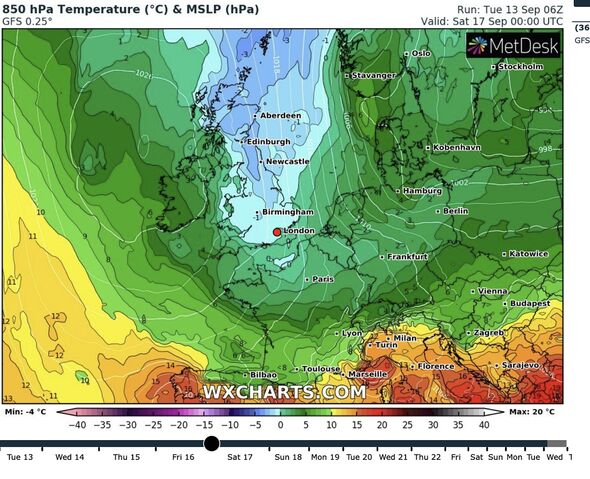 The change in weather pattern will also bring clear, cloudless skies leading to ‘radiation’ cooling and a touch of ground frost, he said.

This will also trigger an air-temperature ‘inversion’–an atmospheric anomaly caused when temperatures rise with distance from the earth’s surface, rather than fall–bringing calm, dry and settled weather, he added.

He said: “With clear skies, heat from the ground will radiate rapidly overnight forming a cold air layer over the Earth’s surface, which is called an inversion.

“This will bring very settled weather, and in the glens of Scotland and exposed regions we could see a touch of frost by the end of the week.

“For most places, it is going to turn cooler and even a touch colder overnight, bringing chilly, dewy mornings and very little in the way of rain.”

Weather charts for the end of the week show the entire country falling under a chilly plume of northerly airflow. 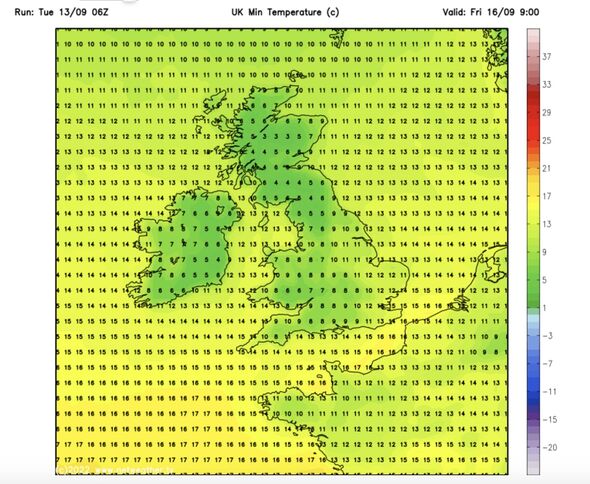 An enormous lid of high pressure between Iceland and Spain, stretching across Britain, will drive the first autumn chill.

High pressure during the summer, as seen during the recent heatwaves, allows hot weather to build, but has a reverse effect during the winter.

Met Office meteorologist Alex Burkill said: “High pressure will build from the west turning things a little bit more unsettled and dragging in cooler air from the north, so we will see temperatures dropping.

“It will be cooler than recent nights, but milder in the south under the cloud, and there will be some heavy bursts of rain on Wednesday morning.

“There is a lot of dry and at times sunny weather to be had, with the risk of a few showers towards northern parts of Scotland and Northern Ireland.” 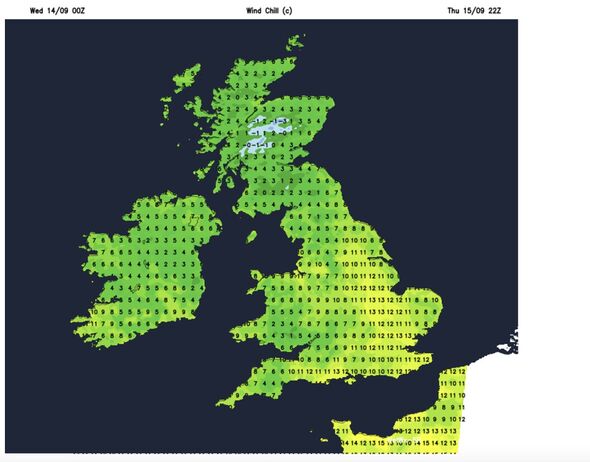 Despite the dry outlook, bookies are slashing odds on the rain with Ladbrokes offering 4-1 on this week bringing the wettest day of the year.

Spokesman Alex Apati of Ladbrokes said: “Things look likely to get a whole lot wetter before they get better if the latest odds are anything to go by.”

Weather models show temperatures dropping widely to single figures by the end of the week.

Windchill charts show chilly gusts making parts of Scotland feel like -3C by Thursday, while the remnants of tropical breezes keep it milder. 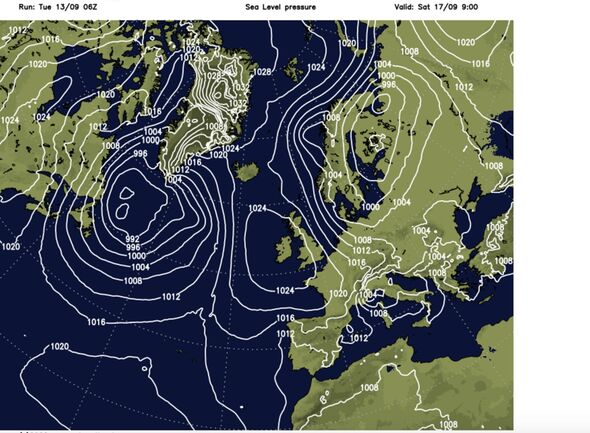 Temperatures will fall later in the week after a final burst of warmth in the south on Wednesday, he added.

“As we look through the rest of the week, with high pressure dominating from the west things are going to turn settled.

“Temperatures are going to drop due to a northerly flow.”