Angry cyclist, 55, beat up his 61-year-old podiatrist neighbour in ‘frenzied attack’ after long-running feud over scuffing walls of communal landing with his mountain bike

A cyclist who launched a ‘frenzied attack’ on his neighbour after he was confronted about leaving scuff marks from his bike on a communal stairwell has been handed a community order.

Nicholas Rowntree, 55, had previous run-ins with Barry Schulz, who manages the block of seaside flats where they live in Poole, Dorset.

Bournemouth Crown Court heard Rowntree often left tyre marks on the stairwell and other damage due to his ‘bad handling’ of his mountain bike.

His actions led to other residents of the Grade II-listed building to chip in and pay to redecorate the communal space three times because of it.

Matters came to a head in April 2020 when Mr Schulz, 61, heard Rowntree come down the stairs with his bike and asked him about the marks.

Rowntree reacted furiously and repeatedly punched Mr Schulz, who was left bruised and bloodied with a cut lip and two black eyes.

After being convicted of assault by magistrates in Poole, Rowntree lost his appeal at Bournemouth Crown Court and has been handed a community order of 150 hours of unpaid work, £330 prosecution costs and a victim surcharge.

Nicholas Rowntree, 55, was convicted of assault after beating up his neighbour Barry Scholz in Poole, Dorset, in April 2020. Rowntree attempted to appeal the verdict, but was upheld by a judge and two magistrates at Bournemouth Crown Court 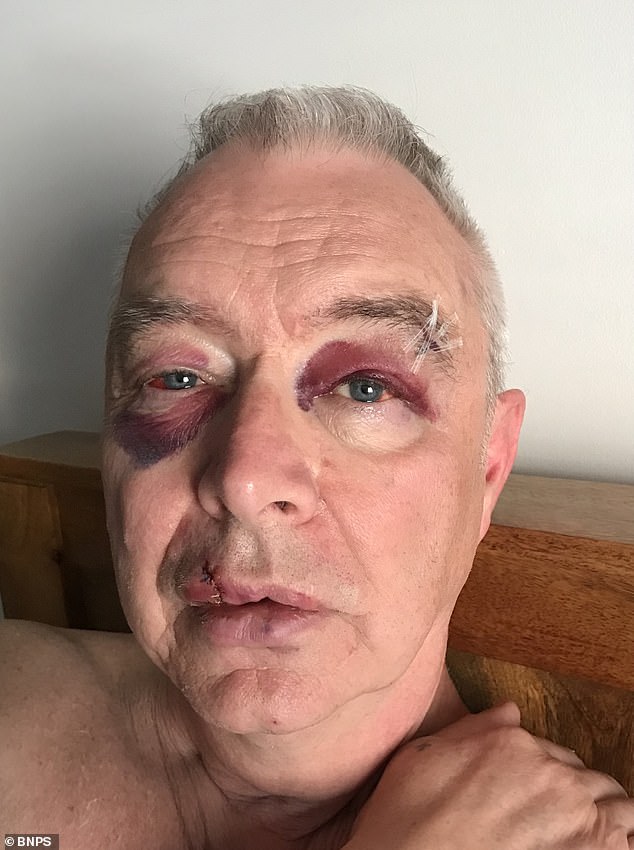 Mr Schulz, 61, was left bruised with a cut lip and two black eyes after Rowntree launched a ‘frenzied attack’ upon being confronted about leaving marks from his mountain bike on the communal stairwell

Mr Schulz, a surgical podiatrist and former army staff sergeant, told the court how he had opened his front door and spoke to his neighbour about damaging the freshly-painted walls.

Rowntree, who has a previous conviction for using his bike to assault a council officer, lost his temper and punched Mr Schulz ‘at least six times’ to the head and face.

He was left battered and bruised and his blood spattered the newly-decorated hallway after the attack.

Mr Schulz said: ‘I was sat in my flat and heard a loud noise. I looked through my peephole and saw (Rowntree) was on the landing with his mountain bike.

‘He takes his bike down on its back wheel but he often loses control and causes damage and marks the wall.

‘I went out to speak to him about the amount of money we had just spent redecorating.

‘I said something like, “why do you keep damaging the landing? We all have to pay for this”. 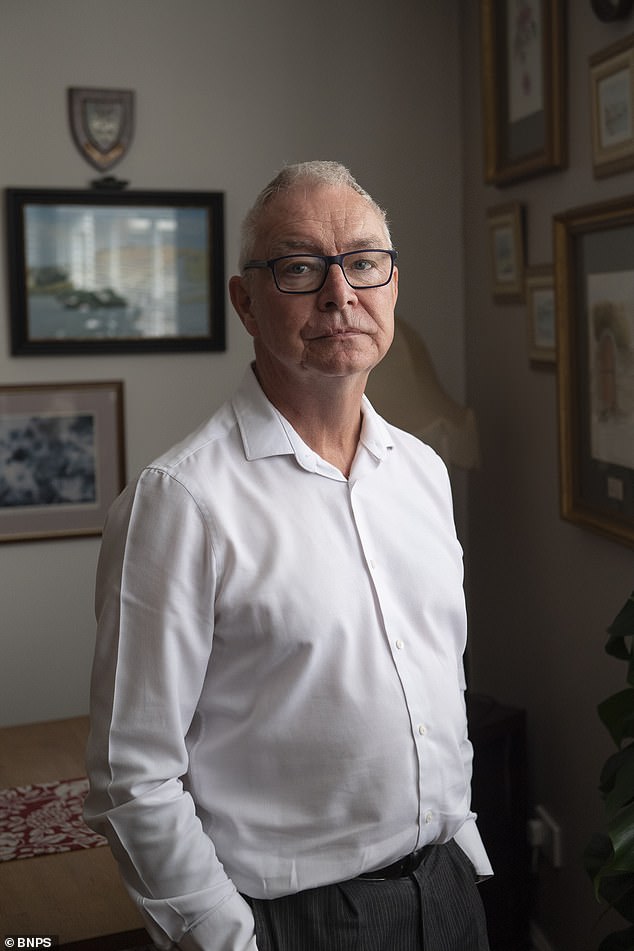 Barry Schulz, 61, a surgical podiatrist and former army staff sergeant, told Bournemouth Crown Court how he had opened his front door and spoke to his neighbour about damaging the freshly-painted walls before being attacked

‘Then he beat me up. It was a frenzied attack to my head and face. It was very sudden and completely unexpected.

‘The first punch completely got the better of me, it was remarkable how quickly it all happened. I remember I just flew backwards.

‘It was a flurry of punches. I tried to put my hands out in front of me, but to no avail.’

Mr Schulz and his wife Michelle moved into the building in Poole’s Old Town in 2018 and he took on the role of director of the building’s management company, handling the finances and any repairs.

He had served 22 years in the army with the Royal Tank Regiment before retiring in 2002 and becoming a podiatrist working with vulnerable patients for the NHS and local council.

But a court heard there had been ‘bad blood’ between him and Rowntree for some time building up to the attack.

Rowntree denied being the aggressor and claimed he had acted in self-defence.

He said Mr Schulz had been banging on his door and goading him to fight saying ‘come on out, fight me you coward’, which Mr Schulz denied.

Rowntree said he had been going down the stairs with his bike and Mr Schulz had kicked him in the back, causing him to fall and land on top of his bike. 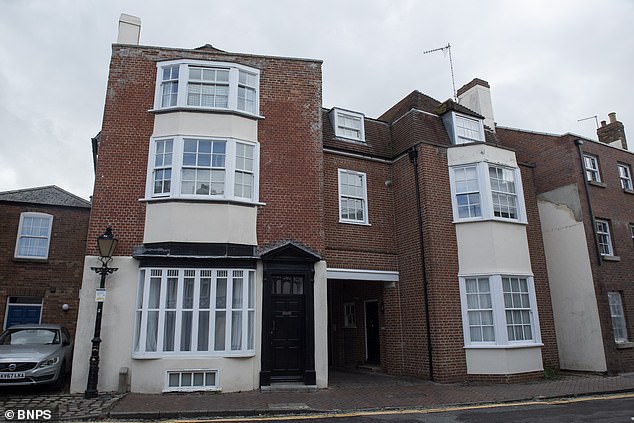 Residents of the Grade II-listed building in Poole, Dorset, chipped in and paid to redecorate the communal space three times after it was damaged by Rowntree’s bike

Mr Schulz is then said to have ‘come at him’ with clenched fists and he had pushed him away, pushing Mr Schulz’s own fists into his face and that had caused the injuries.

Rowntree left before the police arrived and said it was because he did not want to make a complaint as he is trying to sell his flat and did not want anything to affect that.

But magistrates in Poole rejected his version of events and found him guilty of assault.

Rowntree appealed the conviction at Bournemouth Crown Court only for Judge Robert Pawson and two magistrates to uphold it.

Judge Pawson said: ‘We have concluded that Mr Rowntree may have felt threatened, there was a confrontation on the landing.

‘Giving Mr Rowntree the benefit of the doubt, he may have felt he needed to use some form of force to defend himself however we are sure that he did punch Mr Schulz and the force was wholly disproportionate to the threat.

‘We are sure the injuries caused were not the result of pushing Mr Schulz away. We do not allow the appeal and find him guilty of assault by beating.’