Aggressive geese BANNED from canal after attacking and chasing people

Two geese have been banned from a canal after they attacked elderly walkers and chased children.

The birds were spotted acting aggressively towards passers-by who made a string of complaints to the council.

They were removed from the canal by a pest control team — but the decision has sparked a backlash from neighbours. 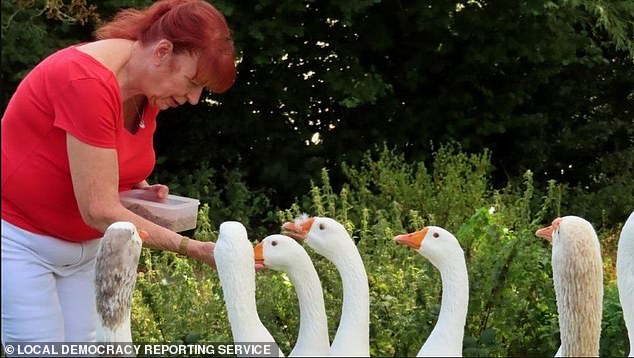 It comes after nine geese in total made their home on the canal in Cwmbran, Gwent, several years ago.

Regular visitors helped to feed and look after the birds, and are now worried for the future of the two banned Buff geese.

A letter sent out by Torfaen council said it had received complaints that the birds had ‘attacked and been aggressive to members of the public’.

Sandra Stevens, 59, who lives nearby, said that people have been left ‘devastated’ after the removal of the geese.

She said: ‘I regularly walk this stretch of canal and have never witnessed aggression in any of the geese.’

Roslynne Eaton, 74, added: ‘The two geese were dumped there about three years ago when they were quite young, and they have been wild fending for themselves.

‘They have just reached maturity so they are a bit feisty but a goose can’t do a lot of harm.’

She is concerned about the birds’ future safety and said they should have been removed by a wildfowl rehoming organisation.

A spokeswoman for Torfaen council said: ‘Following continued complaints from residents about two aggressive geese in the canal towpath area of Two Locks in Cwmbran, the council arranged for them to be rehomed in the interest of public safety.

‘Reports had been received of the geese attacking people, including elderly residents.

‘A council officer was also attacked during their visit to the area to investigate the complaints.

‘At the time the council’s contractor visited to remove the geese, they were seen chasing children on the towpath.

‘The contractor used to collect and transport the geese is experienced in handling animals.

‘Techniques were adopted by them to ensure the health, safety and welfare of themselves and the geese.’