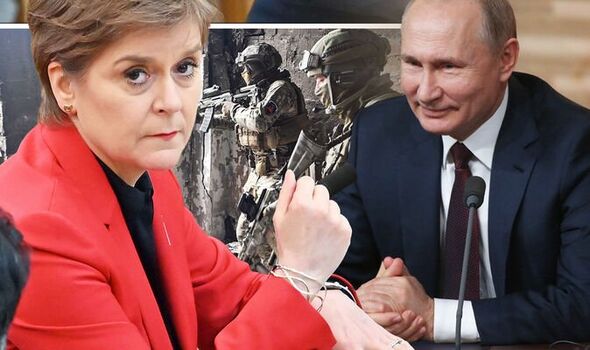 Nicola Sturgeon’s ministers have said no more of their money should be given to the Ukraine for weapons after they were pressured by the Treasury to hand over £65 million.

Scottish Finance Secretary Kate Forbes said the money would be provided “on this occasion”.

But she added to the Treasury the spending “must not be seen as any kind of precedent”.

Her Welsh counterpart Rebecca Evans echoed the remarks, complaining she had been forced to donate £30 million of money earmarked for “devolved areas, like health and education.”

The Treasury struck back, stating they “strongly disagreed” with her characterisation of their request for financial support.

They added government departments across Whitehall had also been asked to make a contribution through their underspend.

The Treasury’s £1billion fund for Ukraine will be used to produce state-of-the-art equipment.

Devolved administrations were given the option of either contributing to the fund directly, or taking a hit to their funding from Westminster via the Barnett formula.

A spokesman denied that a precedent had been set for raiding devolved budgets for reserved spending areas, saying: “This is a response to an extraordinary crisis.”

The request made was highly unusual, as usually foreign aid and spending come directly from Westminster.

However, SNP ministers in Edinburgh have previously voluntarily spent money in other reserved areas such as international development by sending aid to other countries, including Ukraine.

For instance, in the past they provided £4 million for provide basic humanitarian assistance in health, water and sanitation, and shelter for those fleeing the war-torn country.

The Scottish Government said its £65 million contribution would be used to fund “sophisticated air defence systems and thousands of pieces of vital kit for Ukrainian soldiers.”

The £1 billion in extra support brings the UK’s total military and economic contribution to Ukraine to £3.8 billion.

Alongside the additional economic support for Ukraine, Boris Johnson announced today he would be putting 1,000 British troops on a higher state of alert so they can be rapidly deployed in the face of Russian aggression.

“As Putin fails to make the gains he had anticipated and hoped for and the futility of this war becomes clear to all, his attacks against the Ukrainian people are increasingly barbaric.

“UK weapons, equipment and training are transforming Ukraine’s defences against this onslaught. And we will continue to stand squarely behind the Ukrainian people to ensure Putin fails.”

Ms Forbes said: “This further funding is to assist Ukrainian armed forces to fight Russian aggression and the unspeakable brutality being perpetrated.

“We have agreed to providing funding on this occasion given the clear need to maximise the international effort to support Ukraine. However, we are clear that this must not be seen as any kind of precedent which leads to devolved budgets being used to help pay for clearly reserved policy areas.”

Ms Evans meanwhile agreed with the need for military support, adding “we will continue to provide humanitarian support to the many people from Ukraine who arrive in Wales every day”.

But she added: “What is not right is using money that should be for investment in devolved areas, like health and education, to fund a non-devolved spending area – military aid and defence.

“We have accepted this outcome because of our ongoing commitment to support Ukrainian people and to avoid future budgetary uncertainty, but funding for these areas should rightly be met by the UK government.”

Defence Secretary Ben Wallace, who warned that the British military had been forced to survive for too long on “a diet of smoke and mirrors”, yesterday said UK spending levels were not enough.

He said: “To be fair, No10 does say, ‘If you include the extra Ukrainian spend’, they have put a sort of caveat to that. Because, of course, it isn’t core defence spending.

“I mean, it is not my core budget, it doesn’t buy me any more planes, tanks or ships. It is sort of obliquely helping Britain’s defence because we’re helping Ukraine.”

Appearing to disagree, Mr Johnson said: “We’re investing massively in our defences. What I want to see is an Army, Navy, Air Force that is strong, sufficiently numerous. But also has the kit, the training that they need.”

Mr Johnson’s spokesman said: “The PM is of the view that we need to have the right size of force for the UK to both defend itself and to continue to play its leading role in the world.