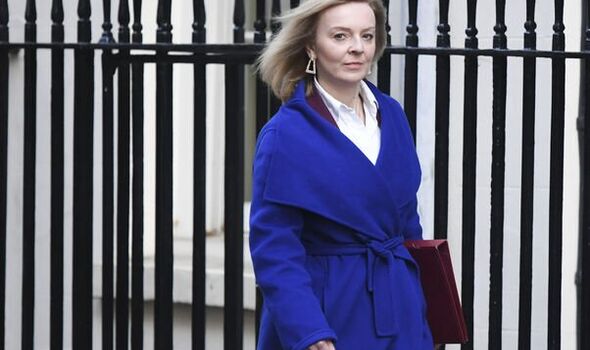 The Foreign Secretary spoke as further atrocities were revealed after mass graves were discovered in Ukraine. Ms Truss said Britain is determined to help in “whatever way we can” and will back Kyiv “unwaveringly”.

She said: “Together we will not rest until Putin fails and Ukraine prevails.”

The Foreign Secretary said the UK is “taking the maximum approach” on sanctions and that “nothing is off the table”.

The demand came as she spoke alongside Ukrainian counterpart Dmytro Kuleba after they met in Poland for talks.

Ms Truss said the UK and its allies have a “responsibility” to step up support for “our brave Ukrainian friends”.

“The reality is that money is still flowing from the West into Putin’s war machine – and that has to stop.”

Ms Truss said she would be working with allies to go further – banning Russian ships from western ports, cracking down on Russian banks and going after new industries “filling Putin’s war chest”.

And she wants allies to agree to “a clear timetable to eliminate our imports of Russian oil, gas and gold”.

The Foreign Secretary said Russia must be suspended from the United Nations Human Rights Council following the strong evidence it has committed war crimes.

Sanctions must remain until all of Putin’s troops have withdrawn from Ukraine and full territorial integrity has been restored, she added.

Mr Kuleba, Ukraine’s foreign affairs minister, told the West that “half measures are not enough” as he made an impassioned plea for tougher action against Putin’s regime.

Germany has said the EU must work towards cutting economic ties with Russia, but that it is not possible to immediately boycott its gas.

Plans must also be drawn up to rebuild the country, it was said.

Mass graves have now been discovered in areas of Ukraine where Russian forces have withdrawn.

Dead civilians were found on the streets of the small city of Bucha and the Kyiv suburb of Irpin, in scenes described as a “horror movie.”

Boris Johnson said the discovery was “sickening”. The Prime Minister said: “The UK will not stand by while this indiscriminate and unforgivable slaughter takes place.”

“We are working to ensure those responsible are held to account. We will not rest until justice is done.”

Mr Kuleba said: “I demand from our partners, on behalf of the victims of Bucha and the people of Ukraine, to take the most severe sanctions against Russia this week.”

“This is not the request of Ukraine’s foreign minister. This is the plea of the victims of rape, torture and killings, their relatives and the entire Ukrainian nation.”

“I have heard thousands of arguments about why this or that sanction cannot be imposed against Russia.”

“I invite foreign representatives to visit Bucha, without any delay. To visit a small village and stand in front of the mass grave, to see the bodies of dead women who had been raped before being killed and who the Russians tried to set on fire to hide the traces of their crimes.”

Mr Kuleba later said: “The Bucha massacre should remove any kind of hesitation and reluctance in the West to provide Ukraine with all necessary weapons.”

He added that the outcome of the war would be decided not only on the battleground but in the “offices in Europe and North America” where decisions about the level of additional support will be taken. Ms Truss has also announced £10million of support for organisations working with survivors of sexual violence in Ukraine.