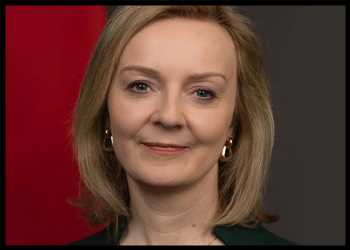 British foreign secretary Liz Truss will become the next Prime Minister after defeating former Chancellor of the Exchequer Rishi Sunak in the Conservative Party’s leadership contest.

In a tight final Conservative leadership ballot on Monday, Truss won 57 percent of the Party members’ votes, while Sunak of Indian origin won 43 percent of votes.

Truss will become Prime Minister on Tuesday after meeting Queen Elizabeth at Balmoral Castle in Scotland.

Prime Minister Borris Johnson will formally offer his resignation to the Queen tomorrow.

Truss promised to “take bold action to get all of us through these tough times, grow our economy, and unleash the United Kingdom’s potential”.

The 47-year-old new leader, who is under tremendous pressure to announce a plan to tackle soaring energy costs, is reportedly expected to announce a freeze on energy bills later this week.

“I know she has the right plan to tackle the cost of living crisis, unite our party and continue the great work of uniting and levelling up our country,”
the outgoing Prime Minister tweeted. “Now is the time for all Conservatives to get behind her 100 per cent,” he added.

Truss is taking over Britain’s top executive post at a time the country is going through a difficult economic situation. Inflation is is in double-digits while food and energy prices are soaring by thousands of pounds.