Billionaire investor: Powell would 'say he made a mistake' with inflation 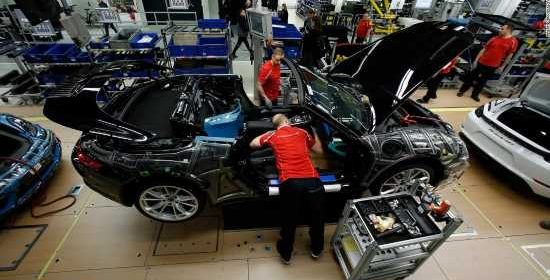 But not everyone is sitting on the sidelines hoping for a return to more normal conditions.
What’s happening: In a statement late Monday, Volkswagen said it had decided to press ahead with the initial public offering for its iconic Porsche brand later this month or in early October, “subject to further capital market developments.”

Volkswagen (VLKAF) first started looking at spinning off a minority stake in the high-performance automaker in February, just as Russia’s invasion of Ukraine jolted investors. A leadership shakeup at Volkswagen added to uncertainty over the listing. Oliver Blume took the reins as chief executive of the German auto giant this month after Herbert Diess was ousted from the job in July.

Yet the automaker has opted to stay the course — even if it means it raises less money due to investor jitters.

Reuters has reported the IPO could value Porsche as high as €85 billion ($84.5 billion), and that Volkswagen could raise more than €10.5 billion ($10.4 billion). That would still set it up to be one of Europe’s biggest IPOs ever, according to data from Dealogic.
That’s not all: CVS (CVS) announced on Monday that it struck an $8 billion deal to acquire Signify Health, a home health care services company.

“This acquisition will enhance our connection to consumers in the home and enables providers to better address patient needs as we execute our vision to redefine the health care experience,” CVS CEO Karen Lynch said in a statement.
Volkswagen’s stock in Frankfurt rose more than 3% on Tuesday morning. It’s now down 16.5% year-to-date. Shares of CVS are flat in premarket trading. They’ve shed 3.6% so far in 2022.
Step back: Dealmaking has slowed sharply this year as market sentiment has deteriorated due to recession fears, soaring energy prices in Europe and uncertainty about plans by central banks to slow inflation. The CNN Business Fear & Greed Index is back in “fear” territory after briefly producing a “greed” reading one month ago.
Just 987 IPOs have been priced so far this year, compared to 2,045 at the same point in 2021, according to data from Dealogic provided to Before the Bell. Deal value has dropped by more than 70%.
Mergers and acquisitions have held up slightly better, with about 25,350 on the books compared to 26,985 during the same period last year. But transactions have been much smaller, as many firms have seen their market valuations plunge.
Deal value for mergers is almost $2.8 trillion year-to-date, compared to more than $4 trillion in 2021.
Looking ahead: Dealmaking could tick up as investors and executives return from time off over the summer.
Private equity firms, in particular, are still sitting on a lot of cash they need to deploy, which could prop up merger activity.
So-called “dry powder” among global private equity players reached a record $2.3 trillion in June, according to PwC. That’s triple what they had on hand at the beginning of the global financial crisis.
“This growth in capital explains why PE’s share of M&A has increased from approximately one-third of total deal value five years ago, to almost half of total deal value today,” the consultancy said in a recent report.

Two competing forces have been driving oil prices: Fears of a global recession, and concerns about limited crude supply. Right now, the former anxiety is winning out.
The latest: Oil prices are dropping on Tuesday, with Brent crude futures falling more than 3%.
The decline follows a nearly 3% gain on Monday after OPEC said it would reduce oil production next month, the cartel’s first output cut since the depths of the pandemic.
The Organization of the Petroleum Exporting Countries and allied producers, including Russia, agreed to shave 100,000 barrels per day off their output targets in October.
“The cut is more symbolic and is likely to have little impact on market balances as it is only a fraction of the headline number,” UBS analyst Giovanni Staunovo said in a research note. “Many alliance members produce below their cap and this move will not affect their output.”
Still, the move reflects a willingness among OPEC to take action as it monitors the market. A steep drop in oil prices since the beginning of June has focused producers on the risk that an economic slowdown in China, the United States and Europe will sap demand for their barrels.
In its August market report, OPEC cut its estimate of global demand for the cartel’s crude oil by 300,000 barrels per day for 2022, and by the same amount for 2023.
On the radar: There are a lot of moving parts. OPEC is also monitoring a possible increase in supply if Iran is able to agree on a new nuclear deal with the United States and Europe that would ease sanctions on its exports. That could push prices lower.
At the same time, Europe’s ban on imports of Russian crude transported by sea will take effect in early December, which could put upward pressure on prices, despite plans for a cap.

A billionaire interviewed top investors. Here’s what he learned

David Rubenstein, the billionaire co-founder of the private equity giant Carlyle, interviewed famous investors like Larry Fink and Marc Andreessen for his new book “How to Invest: Masters on the Craft.”
What did he learn? The greats in the field tend to have middle class backgrounds, solid educations, proficiency at math and an “enormous amount of self confidence,” which gives them a willingness to go against the grain.
“Very often they become great because everybody says you should go left [and] they go right,” Rubenstein told my CNN Business colleague Matt Egan. “They also have the ability to recognize a mistake and get out of it.”
Some of that thinking can be applied to the current market environment, when investors need to have iron stomachs, Rubenstein added.
“When markets are down, that’s when you get in. You’re going to buy [at] lower prices,” he said. “When markets are going up, that’s generally when you should sell.”
If that sounds counterintuitive, consider this: Many of the biggest tech companies in the world will make it through this period of uncertainty with their businesses intact. Investing now, according to Rubenstein, presents an opportunity.
“You have a chance to buy a lot of companies at much cheaper prices than they were trading a year or so ago,” he said. “These are really good companies.”