‘Changed the rules!’ Boris Johnson in one final jab as he exits No10

Speaking shortly after 7.30am this morning, he accused the Conservatives of having “changed the rules part way through” his leadership in a dig at the circumstances surrounding his exit from power.  However, he downplayed suggestions he could one day run again to take over as Prime Minister, comparing himself to a booster rocket “that has fulfilled its function” and is now “gently reentering the atmosphere and splashing down invisibly in some remote corner of the Pacific”.

In a speech delivered in his usual upbeat, jovial nature, he said: “This is it folks. Thank you everybody for coming out so early this morning.

“In only a couple of hours I will be in Balmoral to see Her Majesty the Queen and the torch will finally be passed to a new Conservative leader.

“The baton will be handed over in what has unexpectedly turned out to be a relay race. They changed the rules halfway through, but never mind that now.”

A number of the Prime Minister’s colleagues, Downing Street staff, and his family were on the street to hear his final speech in the top job. 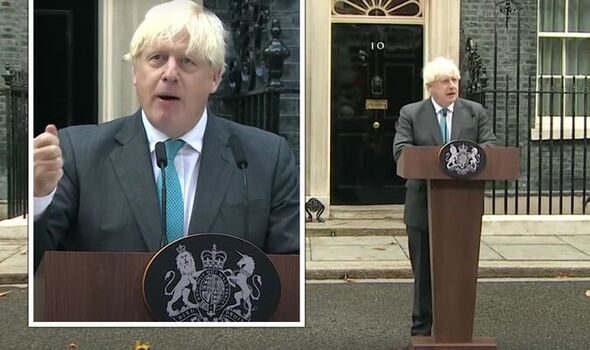 They clapped and cheered as he emerged from the door of No10 to face the world media one final time.

Reeling off his achievements in his three years in the job, he celebrated his record in office.

“Through that lacquered black door, a new Prime Minister will shortly go to meet a fantastic group of public servants,” he stated.

“The people who got Brexit done. The people who delivered the fastest vaccine rollout in Europe, and never forget 70 percent of the entire population got a dose within six months – faster than any comparable country.

“That is Government for you. That’s this Conservative Government.”

And in a parting shot at Russian President Vladimir Putin amid the energy crisis, he added: “If Putin thinks that he can succeed by blackmailing or bullying the British people, then he is utterly deluded.”

Mr Johnson will now fly to the Queen’s estate of Balmoral in Scotland to officially tender his resignation. The monarch will then meet Liz Truss and ask her to form a Government on her behalf.

The handover of power from Mr Johnson to the South West Norfolk MP comes after the Foreign Secretary was appointed as the new Conservative leader yesterday following her victory in the Tory leadership contest.

Weeks of bitter in-fighting marred the party with the race to replace Mr Johnson being toxic at times.

Joking about his dog and Larry, the Downing Street cat, he continued: “I just say to my party if Dilyn and Larry can put behind them their occasional difficulties, then so can the Conservative Party.