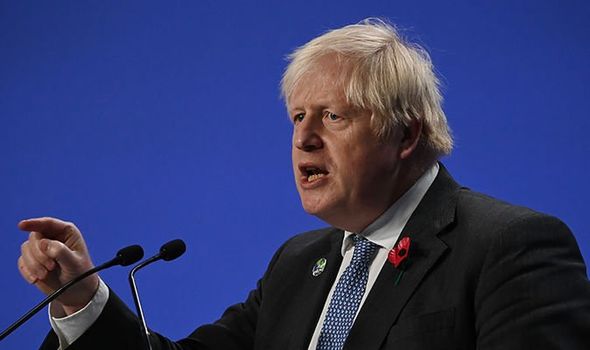 The Prime Minister said politicians must put their job as an MP first and stressed that paid lobbying is never acceptable. But he refused to apologise for the furore which erupted when he attempted to protect Tory MP Owen Paterson after he was found to have lobbied on behalf of two firms he was paid to advise.

In a press conference at the COP26 summit in Glasgow, Mr Johnson was also forced to deny ‑ in front of a watching global audience ‑ that Britain’s political system is corrupt.

He said: “I genuinely believe that the UK is not remotely a corrupt country and I genuinely think that our institutions are not corrupt.

“We have a very, very tough system of parliamentary democracy and scrutiny, not least by the media.

“I think what you have got is cases where, sadly, MPs have broken the rules in the past, may be guilty of breaking the rules today. What I want to see is them facing appropriate sanctions.”

Instead of being asked about his efforts to tackle climate change the PM was repeatedly grilled about another Conservative MP, Sir Geoffrey Cox, who is being investigated for apparently doing paid outside work in his Commons office.

In a thinly-veiled swipe at his fellow Tory, Mr Johnson said: “I just want to say that the most important thing is that those who break the rules must be investigated and should be punished.

“On second jobs, I would say that for hundreds of years MPs have gone to Parliament and also done work as doctors, lawyers or soldiers or firefighters or writers, or all sorts of other trades and callings.

“And on the whole, the UK population has understood that that has actually strengthened our democracy, because people basically feel that parliamentarians do need to have some experience of the world. But, if that system is going to continue today, then it is crucial that MPs follow the rules.

“And the rules say two crucial things: you must put your job as an MP first and you must devote yourself primarily and above all to your constituents and the people who send you to Westminster, to Parliament.”

However, the sleaze crisis showed no sign of easing with Sir Geoffrey under more fire over his £1million-a-year legal work. Footage has emerged appearing to show the QC representing the British Virgin Islands at a fraud commission by video-link from his Commons office.

Also last night it was reported that Sir Geoffrey has earned at least £6million from his second job since becoming an MP.

It was also claimed he had skipped at least 12 parliamentary votes over four days while appearing by video link in a hearing for the British Virgin Islands.

Sir Geoffrey, a former attorney general, denies any wrongdoing but Labour has demanded a standards investigation.

Meanwhile, Andrew Bowie has stepped back from his role as vice-chairman of the Conservative Party.

He insisted he wants to focus on his Scottish constituency, but has reportedly told friends he is “unable to support the Government” in the wake of the debacle.

Mr Johnson, who has seen the Tories’ poll ratings fall after the row over standards erupted last week, said he was not going to comment on individual cases. But he added that parliamentary rules stipulate that MPs should not use their role to “lobby or otherwise intervene on behalf of any outside commercial interest”.

He said: “And it is not only that you have to register those interests ‑ you can’t lobby or make representation while an MP on behalf of those interests. Those are the rules and they must be enforced and those who don’t obey them should of course face sanctions.”

Angela Rayner, Labour’s deputy leader, said: “Boris Johnson’s refusal to apologise proves that he doesn’t care about tackling the corruption that has engulfed Downing Street, his government and the Conservative Party. He thinks it’s one rule for him and another rule for everyone else.”

He told BBC Radio 4’s Today Programme: “I think, where there’s a conflict of interest using a public office for private gain, it should be banned outright and I’ve always said this.”

Last month, Mr Paterson, MP for North Shropshire, was found to have broken rules by lobbying the government on behalf of companies who were paying him more than £100,000 ‑ and for using his Commons office for business meetings, which is prohibited.

He resigned from Parliament last week after the Government’s U-turn over the decision to block the former Cabinet minister’s suspension.

Asked about what needs to change to improve MPs’ accountability, House of Commons Speaker Sir Lindsay Hoyle said: “It’s up to members to ensure that if they want to return to the House they do the right thing by the people they represent.”