Corporate regulator Joe Longo has urged consumers to show a high degree of caution towards the cryptocurrency craze, urging people to be careful about putting their savings into an unregulated asset class that many do not fully understand.

Mr Longo, chairman of the Australian Securities and Investments Commission (ASIC), on Monday said the “phenomenal” cryptocurrency boom had become too big to ignore, but consumers should be aware of the risks before plunging into cryptos. 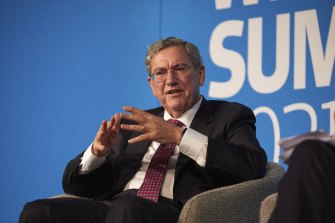 His caution came as the head of the country’s biggest superannuation fund, AustralianSuper chief executive Paul Schroder, said the fund did not hold cryptocurrencies because they did not earn any income.

Following last week’s Reserve Bank warning about the risk of crypto asset prices plunging, Mr Longo on Monday said it was not ASIC’s job to stop people from investing in cryptocurrencies, but they should be aware of the risk.

“The maxim, ‘don’t put all your eggs in one basket’ comes to mind.”

He said there had been “extraordinary” demand for crypto assets from investors and consumers, fuelled by ultra-low interest rates and the pandemic, and warned that consumers were “on their own,” given the lack of any regulatory protections.

“The implications for consumers are potentially huge. It is almost an article of faith that no one should invest in something they don’t understand. Who among us can say they really understand crypto-assets, and cryptocurrencies?” Mr Longo said at Financial Review’s super and wealth summit.

“In my view consumers should approach investing in crypto with great caution. The maxim, ‘don’t put all your eggs in one basket’ comes to mind.”

Debate about cryptocurrencies’ role in the financial sector has taken off in recent weeks after a landmark parliamentary inquiry led by NSW Liberal Senator Andrew Bragg called for cryptocurrencies to be regulated, and after Commonwealth Bank became the first local bank to allow customers to trade cryptocurrencies.

Speaking at the same event, AustralianSuper’s Mr Schroder said the fund did not hold cryptocurrencies because the assets did not produce an income, just as the fund does not invest in gold. “For us, we don’t see cryptocurrency as investable for our members. It doesn’t have the income stream,” he said. 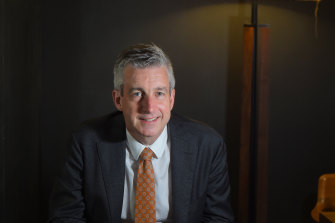 Mr Schroder stressed he was not taking a wider view on the merits or otherwise of cryptocurrencies, and said the fund was studying the underlying distributed ledger or “blockchain” technology.

Earlier in the day, minister for superannuation, financial services and the digital economy, Jane Hume, pointed to Commonwealth Bank’s foray into cryptocurrencies as one sign the trend was not a “fad”. Senator Hume highlighted the rise of the internet, email and iPhones in recent decades to argue the superannuation sector and the government should “tread cautiously, but not fearfully” when it came to cryptocurrencies.

“If the last 20 or 30 years have taught us anything, it’s that all innovation begins as disruption and ends as a household name,” Senator Hume said.

“Decentralised finance underpinned by blockchain technology will present incredible opportunities ‑ Australia mustn’t be left behind by fear of the unknown.”

Mr Longo said ASIC would not stop people investing in cryptos, but nor was it his job to act as a “cheerleader” for the industry. “People can invest, but they need to understand that this is a new frontier, and the regulatory settings are not there,” he said.

He also highlighted that in many cases, financial advisers were not allowed to offer advice on crypto assets because they were not considered financial products.

“At present many crypto-assets are probably not ‘financial products’, making it difficult for financial advisers to offer counsel. So, what can they do when clients are banging down the door wanting to divert their savings into Ethereum or Dogecoin, a currency originally conceived as a joke?” he said.

While ASIC had provided guidance on exchange-traded funds linked to crypto assets – he said that for the most part, investors were “on their own”.