Last month US Inflation hit a four-decade high, nourishing the Federal Reserve’s determination to raise the interest rate, which could reverse economic enlargement.

Year-On-year the CPI has increased at the rate of 9.1% across the globe, which is said to be the biggest rise since late 1981 as the data projected by the Labor Department on Wednesday. The inflation figure rose every month at the rate of 1.3%, clocking highest since 2005, projecting rising prices for gas, groceries, and housing. 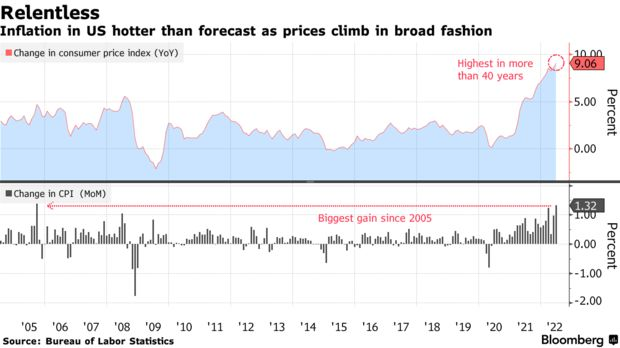 As per the Bloomberg survey, Economists were forecasting a 1.1% rise from May and 8.8% year-on-year. It was the fourth straight month that annual totals exceeded approximately.

The Core CPI which excludes the most uncertain food and energy components, rose 0.7% month-on-month and 5.9% year-on-year, ahead of the projection. As the dollar strengthened, the S&P 500 index opened at the bottom and short-term treasury saw an increase.

Geopolitical risks, the Covid-19 shut down and the war between Russia and Ukraine also threaten the supply chain and the inflation context. Other than these also housing is likely to keep price movement high for some time.

According to Fed policymakers, there will be a 75 basis-point hike in interest rates in late July while inflation has hit a record high.

Several economists are forecasting the possibility of an American recession in the next 12 months. Still, the job market remained strong, adding almost 400,000 new jobs last month.

It’s just not Cryptocurrencies, even the consumer earnings have been impacted. That has begun to affect expenditure as well. In May, consumer expenses decreased for the very first time this year by 0.4% when keeping pace with inflation.